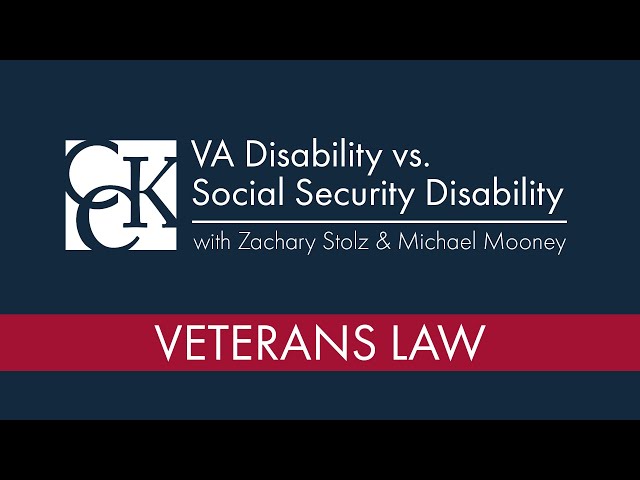 Zach: First, can we do a general overview of kind of the roles that VA and the Social Security Administration play in people’s lives with respect to disability benefits?

Mike: Well they’re both systems designed I think to reward people for good efforts. The Social Security System typically pays people who’ve worked and paid in to Social Security. Everybody is hoping to retire and have some money there when they do and draw that. For the folks who don’t make it that far, who’s employments ended for reasons over which they have no control, they become disabled, then they can get disability benefits. Certainly, that carries them over until they do retire. Similarly, the VA system is designed to reward people who’ve sacrificed for the country and given something of themselves, physically or emotionally or both, and it can pay them very significantly for that if they’re — depending on the level of disability they have.

Zach: And my understanding of Social Security is you’re either disabled or you’re not. In other words they either award you the disability benefits or they do not. Whereas in VA, you can be given benefits for just a knee condition, or just a back condition, or a psychiatric condition or something like that. Can you talk about the differences between the two in that sense?

Mike: It is a profound difference. With Social Security, it’s all or nothing. You’re either 100% disabled from whatever, all your multiple aches and pains and psychological issues or whatever, or you’re not. With the VA, they rate every single one of those components of your disability problem. So if you have a weak knee, if you have an elbow that doesn’t work right. I would guess 50% of all Social Security Disability cases involve bad backs. So bad backs — each one of those in the VA system is separately rated and it sort of explains the difference in piece that is, as I’ve mentioned earlier, a VA case could take 5 to 10 to even 20 years. Social Security case typically takes 2 or 3 years.

And that’s in part because every single one of those body ailments, every single one of the individual problems is a separate case with its own criteria. So you can get a 10% for knee, you can get 20% for the other knee, you can get the low back, you could get emotional, PTSD, and each one of those things has its own separate criteria and each one is infinitely complex. And then when you add all those together, you have like 10 cases in one or 20 cases in one, whereas, a Social Security case is very elegant, simple. Just one overall question, can the person work? And at VA, you can get 0%, you can get 10%, you can get 50%. And then just to make it interesting, the VA doesn’t know how to add. So, if you get 50% for one thing, and 50% for another thing, that’s not a hundred, whereas, any place else would be. In fact, 3 50’s, I would say is 150, I don’t know but you could check my math there. In the VA, that’s 90%, and that pays 62% of what 100 pays. So it is a system that doesn’t reward adequately in my opinion which is another reason why the system takes so long, is because veterans are constantly frustrated by the fact that even when they win, they don’t always get much for it. It’s a situation, of diminishing returns.

Zach: Right. The other part of VA benefit is, unlike Social Security, the VA benefit has to derive from a service-connected condition. And so the Social Security aspect and system is just a disability no matter how it was caused.

Zach: So VA that adds complexity to the cases because the veteran needs to prove an element that he or she does not need to prove in a Social Security context.

Mike: Social Security is easy because everything counts. Every ailment counts, every disability counts. VA, it doesn’t. It kind of explains why – at least it’s one explanation why a veteran who wins a Social Security case isn’t necessarily going to win his VA case. I have a Veteran who’s blind, but not related to service. He also has all sorts of service-connected problems. He gets 100% from Social Security because he’s blind. I tried to convince the VA that if he weren’t blind, all those other conditions would be disabling. And I can’t get them to get past the fact that he’s already blind. And I only bring it up to say this is an example of how a Social Security award of 100% doesn’t necessarily produce the VA award of 100% because the blindness was not service-connected. I mentioned also earlier that, if a–two additional disability systems that we haven’t talked about that are run by each program, Social Security runs SSI which is a program for folks who have not worked and paid into the system. They got to be poor and they have to be disabled, 100% disabled. The VA has almost an identical decision, system called pension, and it pays 100%. In it, it doesn’t have to be service connected.

Mike: It don’t have to–have anything to do with service. All they have to prove is they can’t work and they are or – veteran during a war time period, which is a topic for another day, but common sense would suggest the answer. So if they win an SSI case, then that automatically in this situation produces a win for pension. All they have to do is take their SSI decision down to VA office, and they’ll be awarded pension too. Both of those are need-based programs, meaning they can’t have any other income.

Mike: VA disability system, when it works, is a beautiful thing. If a person does get 100% benefits that pays about $3,000 a month on top of what they get from Social Security.

Zach: So there’s no offset between Social Security and –

Mike: No offset. Say they’re on retirement, and they’re getting Social Security retirement. Unlike Social Security, a major difference between Social Security, all disability at Social Security ends at age 66 and is converted to Social Security retirement. Social Security disability ends at age 66. Within the VA, there is no age limit to disability. So you could be 100, be 80 but still getting disability. So if a person — a veteran’s retired, he could still go down to the VA office and say he can’t work if he can’t, and he’ll get disability benefits. And that money is paid on top of the Social Security, and it’s not taxed which is significant because the typical Social Security award is $1,500 to $2,000, and then you add $3,000 on that, so now we’re talking about $60,000 a year combined, tax-free. So that’s a pretty nice financial benefit that’s obvious, but there’s so many other things that happen. When a person gets 100% benefits from the VA, there’s lots of money available for their kids. If they go to school, if they go to college, $700, $800 a month. Most states provide free state tuition, so they go to school free. I had a client who had 5 children who was able to get 100% benefits. Every single one of them went to college, every single one graduated. One of them is a PhD now, Psychologist. It’s just amazing and this is a family who didn’t have the money to send their kids anywhere. And his wife under the job with the government, it turns out she goes to the front of the line because she’s the wife of a disabled Vet. She gets super treatment and she got a job at the post office was making a nice salary there.

Mike: All because of the 100% award. They get free license plates, free hunting licenses, free fishing license, you name it. The benefits tax-free, most municipalities and counties don’t tax the houses, tax–you don’t have to pay property tax, the rewards for being 100% disabled are enormous. And even smaller awards have benefits. And of course if they have children, they get money for the children, they get money for the wife.

Zach: Right. So in other words, all the pain of going through some of the VA process and some of the wait time and some of the delay, and the amount of evidence that has to be gathered, and the arguments that have to be made by the attorneys, and by the veterans themselves can certainly pay off and do often at the end of the story, do pay off with some nice, very earned and deserved benefits.

Mike: It can be a huge payday, the money does accumulate and I tell my clients when they call, we’ve got to keep playing the waiting game, and that patience is a virtue. I’ve said those two phrases over and over and over, I can’t tell you how many times. And it is very frustrating that it’s so slow, but it’s worth the wait. And I always tell my clients who say well I’m not sure why we’re doing this, I say, “What else is going to happen?” I mean if we dismiss it, you’re still going to be slowly moving on in your age, and eventually, you’ll be–it’ll be 10 years from now, and would you like to get $400,000?

Mike: Would you not like to get $400,000? And that’s why we hang in there. The other thing I would like to say about the two systems is, Social Security is so much more accessible. You know, they have offices everywhere. VA has a single office in every state, and it’s hard to get through to them. And you don’t know who to call, they don’t have phone numbers, and they change their phone numbers and they don’t tell you. At Social Security, you can go to any one of the local offices because remember, they also do retirement which is–disability is a small part of Social Security. Social Security retirement is the big issue. And so they’ve got offices everywhere, friendly people, relatively friendly people. They’re easy to contact, they’re easy to work with. And also there’s a lot of back and forth between the attorney or the claimant and that office, whereas the VA, it’s hard to penetrate. You know, it is shrouded in mystery and so how you get through to them can be a real challenge.

Zach: Well thank you very much, Mike for explaining some of the differences and similarities with Social Security and the importance of pursuing VA benefits when you’ve earned them. So thank you very much. This is Zach Stolz from Chisholm Chisholm & Kilpatrick, and Mike Mooney.