Board of Veterans’ Appeals Issues 100k Decisions in FY 2020 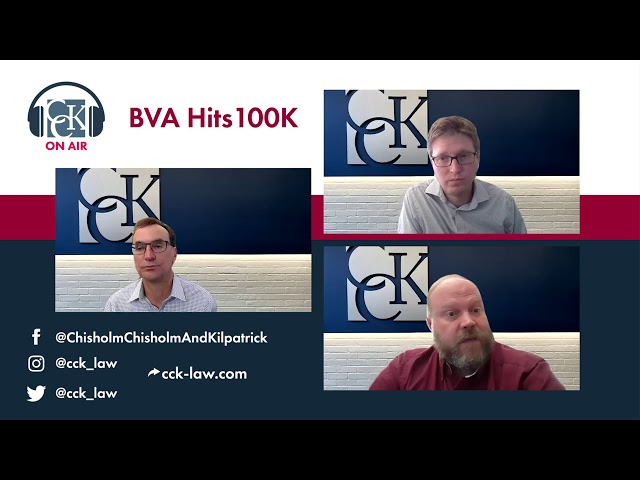 Robert Chisholm: Good afternoon. This is Robert Chisholm from Chisholm Chisholm and Kilpatrick. Today we’re you got a hot take on some interesting information from the board of veterans appeals. Joining me is Zachary Stoltz and Brad Hennings. And Brad, I’d like to turn to you right out of the box and tell us what is going on of the board.

Brad Hennings: What is a really exciting day for the board that they have indicated, they dispatched or sent out over 100,000 decisions. That’s a huge number and it’s something they can be really proud of.

Robert: And we were talking about the fiscal year for the board. We’re talking about a period from October 1st to September 30th. So, the year is just about over and my understanding, is this the first time they’ve ever had a hundred thousand decisions within a fiscal year. Is that correct?

Brad: That is correct. It’s an amazing number and far exceeds what they were doing just a handful of years ago.

Robert: So, truly remarkable and just about three years they’ve doubled their production. What do we attribute that to?

Brad: The biggest reason is increased staffing. They have a full complement of a hundred veterans law judges. They have over 800 staff attorneys who assist the judges in preparing decisions. They have additional administrative folks there and so it’s about 1,200 people at the board of veterans appeals. And you know five years ago the board was at around five or six hundred people. So, they’ve just about doubled staff.

Robert: Zach I’d like to pivot to you and ask you what has the result of this increase in decisions from the Board of Veterans Appeals meant for the next step in the process. So, for example if a veteran gets a denial from the board. They have a hundred twenty days to appeal to the court of appeals for veterans claims. And what is the impact been at the court?

Zachary Stoltz: It has kept the court busy. Fortunately, advocates were ready to go when the board ramped up its production. We’ve been kind of since the board has kind of over the past three years people have been preparing at the court level both on the advocacy side and at the court itself. The court in fact added two new judges that have just taken their seats on the bench. And so, that has been helpful. And so, even though the number of appeals to court is approaching record territory and continuous to go up even in this pandemic. The court is very ready for it. They have been working all the way through the pandemic. They’re working remotely just like VA and the board is and they haven’t missed skipped a beat and added staff and are ready to continue to do their good work in adjudicating Board of Veterans Appeals denials. So, lots of positive things to report their to. Fortunately, there was a little bit of a heads up that the board was going to be able to meet this kind of level of production even though it had never done so before. And so, people were ready to go for it. Which is great.

Robert: And has there been any delay in the time that it takes the veterans appeal to make it through the court as a result of this increase in production from the board at all?

Zach: Not because of the increase in production, sometimes cases can take a while at court. Especially in the cases that go to a full panel of Judges, which means that three judges will hear it. That is not very common. Most veterans over ninety percent of veterans will go to court and they will have their decision made by a single judge and those cases are still coming out within a matter of months. And have been before the board’s increase in production and have if anything got me even faster because of the addition of the Court staff that I talked about earlier. And just because the court has been really mindful of trying to get cases out to Veterans who have waited so long. Hopefully they’re not waiting too much longer at court. And so, the board’s production isn’t affecting the court’s ability to make decisions and it’s a very good thing.

Robert: Brad pivoting back to you. Has covid affected the board’s productivity at all?

Brad: Yes. The good news about covid-19, if there’s any good news this year, is that it allowed the board to spend more time issuing decisions. The bad news as it relates to that is that’s because they weren’t conducting as many hearings. Obviously, it’s been very difficult to have veterans go to their Regional Offices because those Regional Offices have been closed. Many of the offices and the District of Colombia been closed where the board is based. So, they’ve been able to have more time to issue decisions. To work on decisions but less time working on hearings. And working through the hearing backoff.

Robert: Has the board been able to conduct any hearings during covid?

Brad: Yes, the board has what they’ve introduced a new technology called virtual hearings. And it’s my understanding, it’s based on the same platform that the Veterans Health Administration has used for their Telehealth options to also serve veterans during the pandemic. So, in a virtual hearing the veteran can be at their home. Their representative can be at their home and the Veterans Law Judge is where they are at their home. And so, you’ve got all three folks much like a zoom call or a video chat conducting the hearing. And my understanding is that it has been very successful.

Robert: So, if we were to offer a piece of advice to Veterans who want to have a hearing it would be trying to change it to a virtual hearing if you have the technology.

Brad: Absolutely because if you don’t engage in one of those virtual hearings, the chances are you’re going to be waiting a very long time for one of the other kinds of hearings the board is offering. So, definitely if you want a quicker hearing do a virtual hearing.

Rober: All right, so the board did a tremendous job reaching a hundred thousand decisions this year. Do we think they can hit the $100,000 mark or more for fiscal year 2021 that begins in October 1st?

Brad: If I was a betting man, I would say, I would take the under on this, and I do not think they hit a hundred thousand decisions next year. But I think my esteemed colleague may disagree with me.

Zach: Challenge accepted, Mr. Hennings. I think that the board can do it again. They’re going to face a little in seriousness and Brad and I have talked about this before but in seriousness, I think the board can do it. They certainly worked hard this year. They’re going to face some remarkable headwinds in the next fiscal year. They’ve got all these hearings to get through there battling Legacy Appeals versus Appeals Modernization Act appeals. And if you don’t know what I’m talking about, there’s lots of good advice on that or a good information I should say on that on CCK’s website. And be sure to give us a call if you have any questions because that’s going to be a big fight. It’s very complicated. It’s going to be very hard to work through. But they did it once. Why not do it again, right?

Robert: Well, there you have it everyone two different opinions on whether the board will be able to keep this production up. I’m going to pivot and plug something that’s coming soon to the CCK website. It’s a tool that we’ve developed internally called breaking down the backlog of at the board of veterans appeals. And Brad, we get a lot of data from the board both released by the board and data that we request from Freedom of Information Act requests. And what’s behind this breaking down the backlog at the board of veterans appeals tool?

Brad: So, the idea is we wanted to take data from different sources that don’t necessarily match up. Taking it both from public sources on the board’s own website that they make available. As well as Freedom of Information Act request that we make on a routine basis just to keep an eye on on how things are going. And so, we’re combining both this more public-facing information data with stuff that we’ve always collected. And we’re going to try to make it available to everyone. And provide a little transparency to some of the numbers because sometimes it’s very difficult to understand what the numbers mean. What the delays are, where the delays are. Because VA is a notorious for publicizing different numbers at different points in time. So, you can’t really always compare apples to apples. So we’re trying to compare apples to apples for a change. Great.