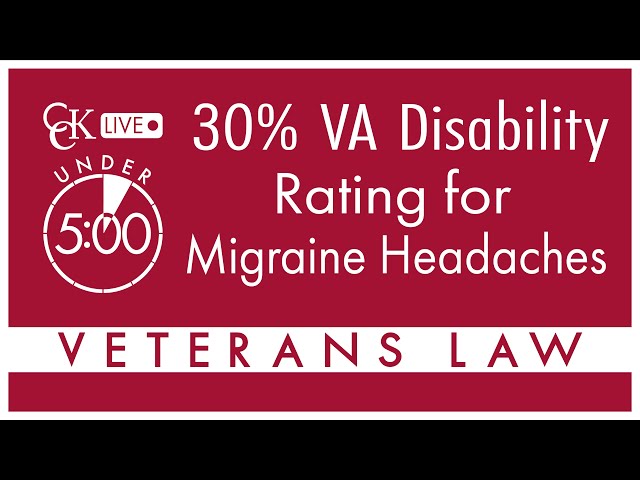 So, migraines are a type of headache characterized by intense pain that’s accompanied by nausea, vomiting, sensitivity to light, lightheadedness, and blurred vision.  Migraines can last for hours or even days, and they can interfere with a person’s daily activities.

So, according to VA, veterans who deploy are more likely to develop migraine headaches as compared to their civilian counterparts.  This can be due to increased exposure to stressful combat situations such as explosions, falls, accidents, which results in traumatic brain injuries, or TBIs, concussions, which are mild TBIs, or neck trauma, which can lead to migraines.

So, ratings for migraines are going to be found under 38 CFR section 4.124a, which is titled the neurological condition and compulsive disorders.  Specifically, it’s gonna be under diagnostic code 8100.  For migraines, the ratings do vary from a 0 percent rating, or a non-compensable rating, to a 50 percent rating, which basically varies between the severity and frequency of migraines.  But today we’re going to focus on that 30 percent rating.

So, the 30 percent rating can be broken down into three main components.  The first is going to be characteristic prostrating and occurring on an average of once a month, for over the last several months.  So, what’s prostrating?  So that’s a pretty hot-button issue in VA law, but generally, it means when veterans’ migraines are so severe and debilitating that the veteran must lay down for an extended period of time due to complete exhaustion or physical weakness.  It can also mean when someone has to stop all activity or possibly take medication or seek some type of medical attention.

So, that is your brief overview of the 30 percent rating for migraine headaches.  For more information on migraines and how VA rates them, please go to our website.  We have both blogs and other full-length CCK Lives on the topic.  Thanks for watching and be sure to follow us on social media and subscribe to our YouTube channel.