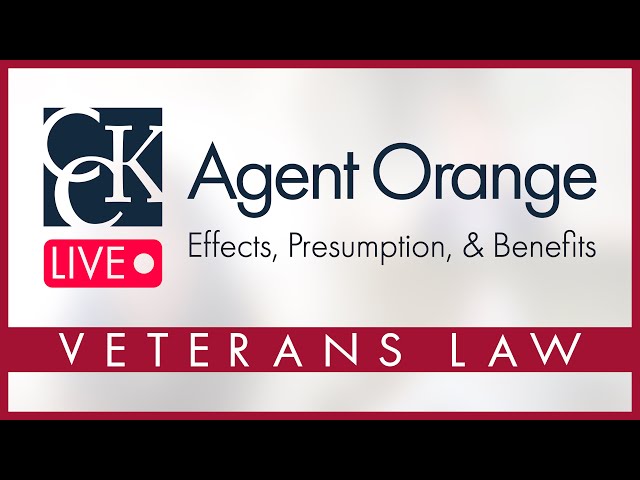 Jenna Zellmer:  Good afternoon, and welcome to CCK Live.  My name is Jenna Zellmer.  Joining me today are Alexandra Gamache and Kevin Medeiros.  The three of us all represent veterans before the VA and before the court in obtaining their veteran’s benefits.  And today, we’re going to be discussing Agent Orange, its effects, VA’s presumption related to Agent Orange, and how it relates to veteran’s benefits.

So, just to start off, what is Agent Orange?  It’s one of several herbicides that was used during the Vietnam war.  These were used by the U.S. military to deforest large areas of land, to interrupt enemy food supplies, and to increase visibility, and related to increasing visibility, that would prevent ambush attacks against U.S. service members.

So, it was used a lot during the Vietnam War, specifically in Vietnam.  It’s a mixture of two different kinds of highly toxic chemicals.  And so, obviously, when those toxic chemicals break down and are released into the environment, that can cause a wide array of health effects, and the veterans who were in Vietnam who are exposed to that toxin, we’ve come to realize that they have a lot of different health problems related to Agent Orange.

So, that kind of takes us into why it’s important to talk about it for veterans, specifically.  So, Kevin, why don’t you tell us a little bit about Agent Orange effects and VA’s presumption.

Kevin Medeiros:  VA has established presumptive service connection for veterans who served during certain periods of time in certain areas and who have what are called presumptive conditions.

So, what presumptive service connection means is that a veteran does not need to establish one of the elements of service connection that they normally would have to establish which is the nexus.  So, if there’s proof that the veteran came into contact with Agent Orange in certain locations and during certain time periods.  That’s all they need to show as long as they have the condition that’s considered presumptive by the VA.  They don’t need that additional medical opinion linking the condition to their Agent Orange exposure.

So, some veterans who might be eligible and qualified for presumptive service connection for the conditions listed, as what VA considers presumptive, are veterans who are boots on the ground in Vietnam, veterans with service aboard a ship that operated in the inland waterways of Vietnam, which are commonly known as Brown Water Veterans, veterans with service aboard a ship in Vietnam’s territorial seas, which is a relatively new development now known as Blue Water Navy Veterans, and veterans who were on or near the Korean Demilitarized Zone, also known as the DMZ, between September 1967 and August 1971.  And then there’s a last one which is active duty and reservist personnel who had regular contact with C-123 aircraft between 1969 and 1986.  Those were the aircraft that generally flew the Agent Orange-related missions.

Jenna:  If you qualify under any of those specific locations or specific time frames, all you really have to do is show that you were in that location during that time frame and VA will presume that you were exposed to Agent Orange.

So, it’s really difficult to prove that you came into contact with Agent Orange because it was so prevalent in those periods or in those areas.  And so VA has kind of made this presumption to say ‘we’re just going to assume that you were exposed because it was all over the place, and we’re not going to require you to say that you saw sprain or that you saw barrels of Agent Orange.  If you were there, we’re just going to say you are presumed exposed,  which is great because that is a huge hurdle for veterans to kind of prove.

And so, assuming that you were in one of those locations during one of those times and you have a specific condition, you can get presumptive service connection.  So, Alex, why don’t you tell us a little bit about some of the conditions?  There’s a lot, so we’re not going to go through all of them, but we have a lot of information on our blog about it and we’ll kind of link some information below.  So, Alex, take us away.

Alex Gamache:  So, like, Kevin mentioned, VA has a list of presumptive conditions which are conditions and their symptoms is having a strong association with Agent Orange exposure.  Like Jenna mentioned, the list is very extensive, but some of the conditions do include, but are not limited to, diabetes mellitus type 2, ischemic heart disease to include coronary artery disease, Parkinson’s disease, peripheral neuropathy, prostate cancer, and respiratory cancers to include lung cancer.

I think what’s the most unique about the presumptive conditions is that the list is not set in stone.  As more research regarding the harmful effects of Agent Orange are done, more conditions are added to the list.  So, for example, in January of this year, Congress added bladder cancer, hypothyroidism, and Parkinson’s-like symptoms to the presumptive list as part of the National Defense Authorization Act or the NDAA. Like Jenna mentioned earlier, for more information regarding the 2021 NDAA, you can visit one of our previous blog posts.

Jenna:  I think it’s really important to take a look at what your diagnosis is, talk to your doctor about it, and cross-reference that with the list that VA provides.  Because if you have one of those conditions, you should get presumptive service connection and it’s much easier for a veteran to get service connection for one of those disabilities, assuming that they had the requisite service.

So, that’s just something to keep in mind.  We’re kind of keeping an eye on it.  Hopefully, one day VA will add hypertension to the list of presumed disabilities but right now, it’s not.

So, that’s kind of what happens if your condition is not presumptive, but Kevin, what about the reverse of that — if you didn’t serve in Vietnam, but you think you were exposed to Agent Orange?

Kevin:  So, earlier, I mentioned the presumptive periods for Vietnam and the Korean DMZ.  But Agent Orange has also been used and veterans have been exposed to it in different locations.  A big one that we see is Thailand, and some others that we see is in Cambodia, Laos, and a few other locations.

But veterans who were exposed to Agent Orange in these locations won’t benefit exactly from the presumption that they have been exposed.  So, they still, just like you said Jenna, when a veteran doesn’t have a condition that’s presumptive, they still need to prove the three elements of service connection.

And this time, it’s that they need to show that they had actually come into contact with Agent Orange exposure on facts-found basis.  So, the VA isn’t just going to assume that because you were in Thailand, that you were exposed to Agent Orange.  You’ll have to show that you meet some other requirements that they have.  And we have some blogs about this that are very helpful for reference, especially for veterans who served in Thailand.

Jenna:  Alex, what happens if you’re not a veteran but you think that you have something due to Agent Orange?

Alex:  Agent Orange exposure doesn’t just end with the veteran.  It may also contribute to birth defects and disorders in the veteran’s children.  Studies have indicated that Agent Orange exposure has led to increased rates of stillbirths and birth defects in the children of veterans exposed to Agent Orange.  So, children of veterans who are exposed to Agent Orange may also be eligible for some health care benefits if they meet certain criteria.  If you believe your child may be in this category and want further information regarding this topic, please visit one of our blog posts if you want more information.

And so, we have a lot of videos and blog posts about ratings, how to get an increased rating, and what to do when you go to an exam.  I think the one takeaway that we’ve always say is make sure that you attend your exam.  Don’t ever skip an exam.

Different conditions are rated based on different diagnostic codes and those ratings can range from zero to a hundred percent.  Alex mentioned different sorts of cancers.   If those cancers are active, you’re probably going to get a 100 percent, and then if they go into remission, that rating will go down.  Diabetes is a big one, too, although those ratings kind of depend on the severity of your condition.

And then, finally, you might also qualify for other health care benefits in addition to monthly compensation.  So, it’s always important to look into that and talk to your representative or your attorney, whoever is helping you with your claim.

So, that’s really all we’ve got for today.  Thank you so much for tuning in.  Kevin or Alex, do you guys have any closing thoughts?

Kevin:  Just like you had mentioned, Jenna, for veterans who might not fall squarely under the presumptions that VA provides, it’s always very helpful to talk to someone, a VSO or an attorney, because veterans who fall squarely within the presumptions, VA will usually get that right.  But if you don’t and you think you’re otherwise exposed to Agent Orange or that your condition might be related to Agent Orange, it’s always helpful to have someone guide you through the process.

Alex:  I was going to say exactly what Kevin said.  I think a lot of clients will get discouraged if their condition is not on the presumptive list and they think that they can’t get service-connected for it.  I think it’s always worth a shot.  If you have a condition you believe it’s due to Agent Orange exposure, I recommend filing for it and seeing what happens.  And like Jenna said, continue to go to your VA exams and continue to follow up with the VA process.

Jenna:  So, as always, you can read our blog and watch our other videos for more information.  And please don’t forget to subscribe to our channel to keep up with the latest veterans news and benefit information.  We’ll see you next week.