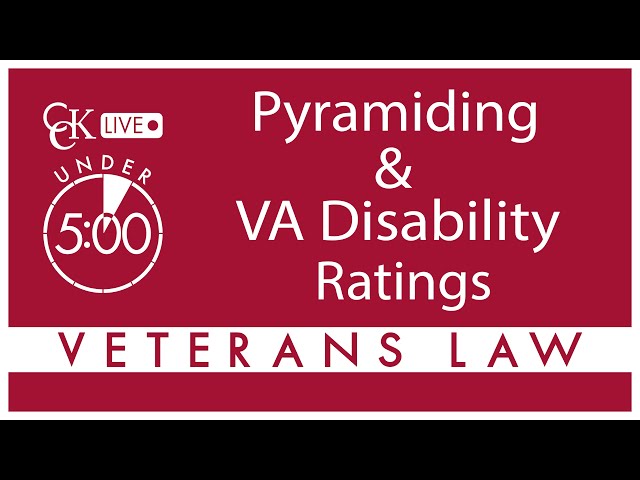 Rachel Foster: Hello, I’m Rachel Foster.  Welcome to CCK Live Under 5.  We are reviewing the rule against pyramiding with VA disability ratings.  Pyramiding is the VA term for rating the same disability or the same manifestations in symptoms twice.

The term comes from VA’s regulations, section 4.14, regarding the avoidance of pyramiding.  This regulation explicitly prohibits the practice of pyramiding in VA disability claims.  When VA assigns a rating for service-connected disability, they use the rating schedule, which lists specific diagnostic codes according to the disability, and each diagnostic code lists the criteria symptoms that are required to get a certain level of compensation.

In some cases, a veteran might experience the same or overlapping symptoms as a result of two separate conditions.  Pyramiding becomes an issue in cases where veterans have multiple diagnoses of particular types of conditions like, for example, mental health or respiratory conditions, and it’s an issue because those symptoms frequently overlap.

So, just a couple of things to note about the rating process in general, it’s that in VA’s rating schedule, the rating levels under each diagnostic code are based on the current symptoms a veteran is experiencing rather than just the veteran’s diagnosis itself or the prior severity in service.  This means that the VA is looking to compensate veterans for the current effects of their condition according to the diagnostic criteria, not just the diagnosis.

In doing this, VA is careful to avoid rating the same symptoms, even if it’s for two different disabilities, under separate diagnostic codes.  In other words, VA does not want to compensate the same symptom twice.  Just as an example, say a veteran is service-connected for post-traumatic stress disorder, or PTSD, due to an in-service combat event and experiences flashbacks, hyper-vigilance, social isolation, and they also have severe sleep impairment and high irritability around others.  The PTSD rating criteria take these symptoms into account.  Later, it becomes clear for the same veteran that they also suffered a traumatic brain injury, or TBI, while they were in service and service connection is awarded.

Whatever they choose to do by law, VA must compensate the veteran for these symptoms and apply those symptoms to the diagnostic code that would give the veteran the highest overall rating.

Thanks for watching this brief overview on pyramiding.  I hope you found this information helpful.  Be sure to check out our longer-form videos where we get more in-depth on these topics or check out our blog.