What Are the Symptoms of Contaminated Water at Camp Lejeune? What Was the Water Contamination at Camp Lejeune?

Between 1953 and 1987, veterans and their families living at United States Marine Corps Base Camp Lejeune in North Carolina were exposed to toxic chemicals in their drinking water.  Essentially, for more than three decades, individuals stationed at Camp Lejeune drank, bathed, and cooked with water laced with dry-cleaning solvents, degreasers, and chemicals.

Testing found that drinking water sources at Camp Lejeune contained contaminants known as Volatile Organic Compounds (VOCs).  Among the VOCs were additional classes of chemicals such as benzene, trichloroethylene (TCE), tetrachloroethylene or perchloroethylene (PCE), and vinyl chloride (VC).  All of these are known carcinogens and have been linked to many serious health conditions.

According to the Agency for Toxic Substances and Disease Registry, VOCs in the Camp Lejeune water wells surpassed the Environmental Protection Agency’s set limits.  Although officials were aware of the water contamination at Camp Lejeune, they never addressed the problem.  Only in 1985, following decades of contaminated water, were most of the wells finally shut down.

What Are the Symptoms of Contamination at Camp Lejeune?

According to the EPA, TCEs can affect the central nervous system and lead to acute and chronic symptoms of headaches, dizziness, confusion, facial numbness, weakness, and feelings of euphoria.  Additionally, people affected by PCEs for longer periods of time may experience changes in memory, mood, attention, reaction time, and/or vision.

PCEs and TCEs can also increase the risk of several cancers (e.g., kidney, liver, prostate, colon, multiple myeloma, and more) and Hodgkin’s disease.  Furthermore, TCEs may have effects on pregnancy and unborn children, such as birth defects or miscarriages.

Consuming fluids with high levels of benzene may lead to immediate effects of drowsiness, dizziness, rapid or irregular heartbeat, tremors, confusion, headaches, or unconsciousness.  Over time, benzene can cause a decrease in red blood cells, leading to anemia.  In women, benzene exposure may lead to irregular menstrual periods and a decrease in the size of ovaries.   Consistent, long-term benzene exposure may also lead to harmful effects on the bone marrow.  Benzene has been connected to forms of leukemia as well.

Vinyl chloride exposure has been linked to permanent liver damage and lung and liver cancers.  It also may cause changes to skin and bones in the hands.

In addition, there have been studies linking contaminated water at Camp Lejeune to neurobehavioral effects.  Some examples of these effects include: The Honoring Our Promise to Address Comprehensive Toxics (PACT) Act, signed into law on August 10, 2022, may enable you to receive compensation due to contaminated water exposure at Camp Lejeune.

The PACT Act creates a federal cause of action for any individual, including veterans, who resided, worked at, or was otherwise exposed to Camp Lejeune’s water for at least 30 days between August 1, 1953 and December 31, 1987.  Anyone who meets these criteria, and is experiencing symptoms as a result, may bring in action in the United States District Court for the Eastern District of North Carolina to obtain compensation.  Compensation will also be subject to offsets for federal benefits the individual receives for the claimed condition, such as VA or Medicare benefits for a condition caused by Camp Lejeune exposure.

The statute of limitations for bringing an action before the Court is two years after the passage of the PACT Act or 180 days after the claim has been denied under 28 USC § 2675, whichever is later.  This means it is important to act fast to pursue potential compensation for symptoms related to Camp Lejeune exposure.

Chisholm Chisholm & Kilpatrick, a national leader in Veterans Law, is working with the law firm of Levin Papantonio Rafferty, nationally recognized leaders in Mass Tort law, to help those exposed to the toxic water at Camp Lejeune receive the compensation they deserve.  Reach out to CCK today to see if we may be able to help you. 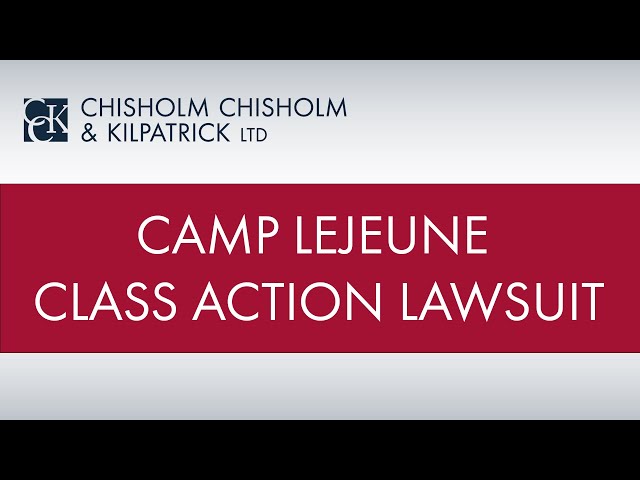 The Department of Veterans Affairs (VA) grants presumptive service connection to veterans who served at Camp Lejeune for at least 30 cumulative days from August 1, 1953 through December 31, 1987 and developed one of the following conditions:

Camp Lejeune veterans who developed a condition not yet included on this list can still apply for VA disability compensation.  However, they will need to provide a medical nexus opinion connecting their condition to the Camp Lejeune water contamination.

Importantly, there are a significant number of studies regarding the toxic water situation and associated symptoms and medical conditions.  This research can be used as evidence in claims for direct service connection.

Medical Benefits for Camp Lejeune Veterans and Their Families

In 2012, Congress passed the Honoring America’s Veterans and Caring for Camp Lejeune Families Act.  Under this legislation, veterans and their families exposed to the contaminated water could automatically qualify for certain medical benefits.

The conditions eligible for healthcare benefits, such as reimbursement for out-of-pocket healthcare costs, include the following:

It is important to note that this list differs from VA’s list of presumptive conditions for disability compensation.

If VA denied you benefits on your Camp Lejeune claim or if you are interested in pursuing a claim against the federal government, the team at Chisholm Chisholm & Kilpatrick may be able to help.  CCK provides free case reviews for veterans seeking assistance with their VA appeals.  Call CCK today at 800-544-9144 to schedule yours.