How to File a VA Supplemental Claim What is a VA Supplemental Claim?

Upon full implementation of the Appeals Modernization Act (AMA), VA amended the definition of “claim” to include two types of VA claims: initial and supplemental.

A VA supplemental claim is a claim for disability benefits filed by a claimant who had previously filed for the same or similar benefits on the same or similar basis.  The U.S. Department of Veterans Affairs (VA) is required to readjudicate the claim if new and relevant evidence is presented.

The Appeals Modernization Act (AMA) was signed into law in 2017 and went into effect in early 2019.  It gave veterans the freedom to choose one of three appeal lanes following an initial decision on a claim:

After appealing through one of these three lanes, VA will make another decision on the veteran’s claim for benefits.  Both the Higher-Level Review and Supplemental Claim lanes will yield Rating Decisions while the Notice of Disagreement lane will produce a Board decision.

At the Board there are three lanes from which veterans can choose: (1) the direct docket; (2) the hearing docket; and (3) the evidence docket.

The Supplemental Claim lane under AMA is the only appeal lane in which VA has a duty to assist veterans in gathering evidence to support their claims.  VA does not have a duty to assist during the Higher-Level Review process or in appeals to the Board.

What Is New and Relevant Evidence?

Again, the this lane allows for the submission of new and relevant evidence.  Here, “new” means that the evidence must not have been of record when VA was previously reviewing the claim.  “Relevant” indicates that the evidence proves or disproves an issue related to the veteran’s claim.

Examples of new and relevant evidence include:

The new and relevant evidence standard was implemented under AMA.  This standard is supposed to reflect a lower evidentiary threshold than the “new and material” standard employed in the Legacy appeals system.

Issues with the New and Relevant Evidence Standard

A major problem with the new and relevant evidence standard, however, is that VA has been inconsistent when applying it to supplemental claims.  There have been decisions where VA still refers to the old “new and material” evidence standard or where VA adjudicates claims in a way that suggests the new standard is higher (i.e., harder to meet) than the previous one.

When to File a VA Supplemental Claim

A veteran can also submit a supplemental claim with new and relevant evidence if they were denied benefits in a Higher-Level Review.  In other words, veterans are permitted to switch to the Supplemental Claim lane even after initially selecting the Higher-Level Review option.  If this switch occurs within the one-year period following the date VA issued the decision on appeal, the veteran’s effective date will be preserved.

There is no limit on the number of supplemental claims a veteran can submit.

How to File a Supplemental VA Claim

In recent years, VA insists that veterans and claimants fill out the correct forms before it will address the filed claim.  Under AMA, VA created new forms for the different review options.

Veterans are required to submit VA Form 20-0995, Decision Review Request: Supplemental Claim when initiating a supplemental claim for disability compensation.  VA uses this form to identify the issues that a veteran is dissatisfied with and determine the veteran’s eligibility to apply for a supplemental claim.

How to Fill Out VA Supplemental Claim Form 20-0995

The supplemental claim form is broken up into the following sections:

Veterans should be sure to adhere to the instructions listed on the form to ensure their claim is accepted and processed by VA.  Failing to do so may result in unnecessary delays.

Veterans who started their claim in the Legacy system must also check a box indicating that they will be opting in to the modernized review system.  By checking that box, claimants are electing to participate in the AMA system and withdrawing all eligible appeal issues listed on the form from the Legacy system. 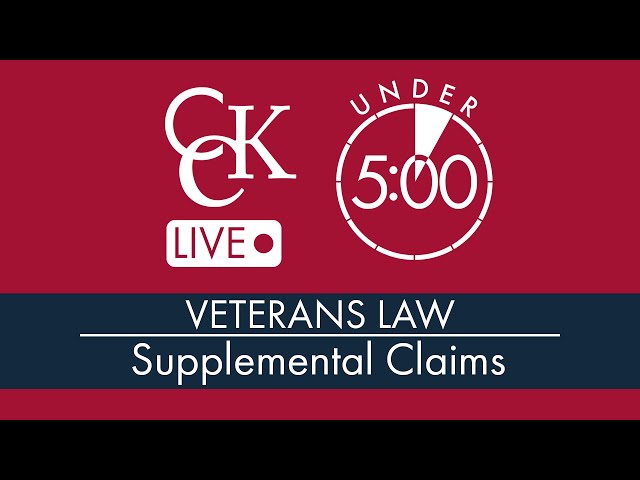 How Long Does a VA Supplemental Claim Take?

About 75 percent of veterans have been filing supplemental claims under AMA.  Most veterans are choosing this lane after being issued an unfavorable decision due to missing evidence.

For example, a veteran gets a decision indicating that they are missing a diagnosis.  As a result, the veteran goes to their doctor and obtains a diagnosis.  This evidence would be considered new and relevant, and therefore, the Supplemental Claim lane would be the best choice to appeal VA’s decision.

Fortunately, VA has been processing supplemental claims at a moderate rate – VA’s claim timeline is generally around 60 days.  Overall, VA has a 125-day goal for issuing decisions in this lane.

Veterans may also be able to track their VA claim status online by creating a VA account.

How CCK Can Help with Your Claim

If VA denied your disability claim due to missing evidence, Chisholm Chisholm & Kilpatrick LTD may be able to help you find the documentation you need to appeal the decision.  The experienced and accredited veterans’ advocates at CCK know how to develop successful claims.

If you would like assistance with your supplemental claim, reach out to CCK today for a free consultation.