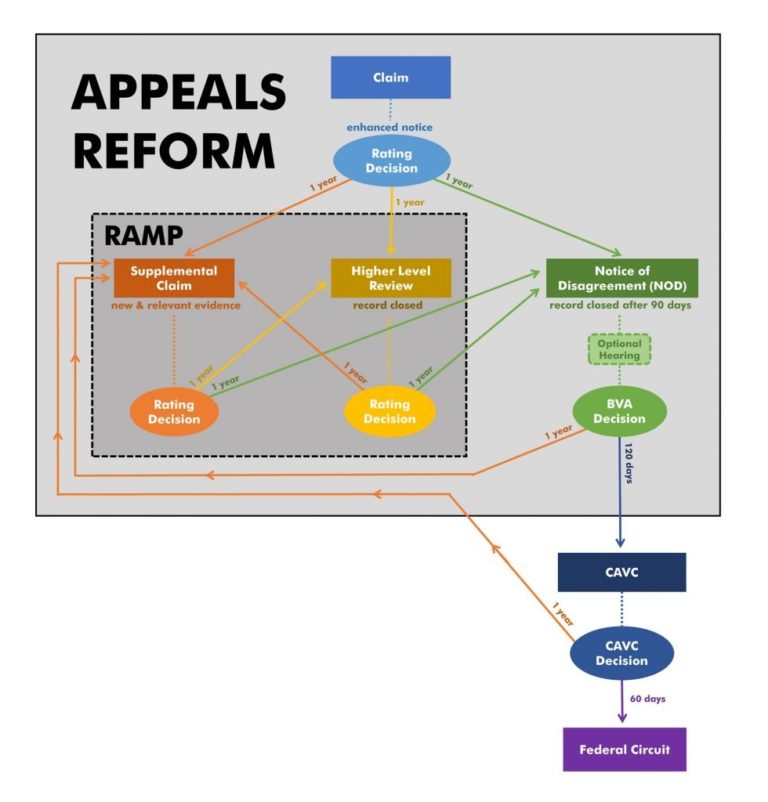 The Veterans Appeals Improvement and Modernization Act of 2017 (AMA) began as a collaborative effort involving various stakeholders, including VA, Veterans Service Organizations, and Congressional Staff.  It quickly gained bipartisan support and was signed into law on August 23, 2017.  In November of 2017, VA introduced the Rapid Appeals Modernization Program (RAMP), which served as a pilot program to test the new appeals system.  Initially, RAMP was only available to veterans through invitation.  However, following a low opt-in rate, VA opened RAMP to all veteran with pending appeals in April of 2018.

Despite extending RAMP eligibility to all veterans, VA only offered partial access to the pilot program, preventing RAMP participants from initially taking their claims to the Board of Appeals for Veterans’ Appeals (Board).  Instead, veterans were able to choose either the higher-level review lane or the supplemental claim lane when appealing.  Yet this changed in October of 2018 when VA opened the Board lane to veterans enrolled in RAMP.  Importantly, RAMP ended on February 15, 2019 just several days before the full implementation of AMA. 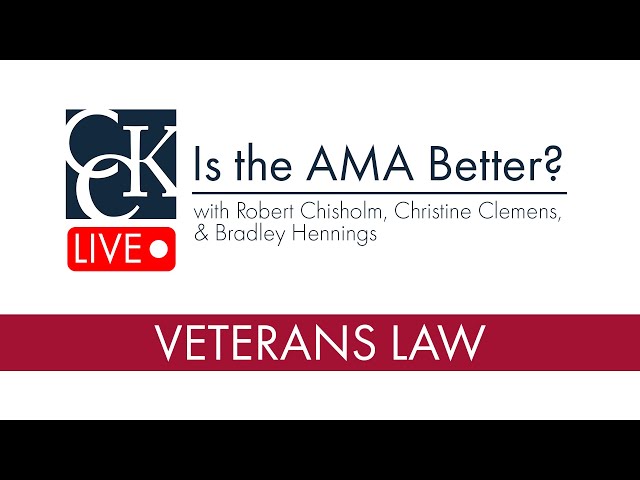 Why is AMA So Significant?

Again, AMA is aimed towards restructuring the entire VA disability appeals process in order to simplify and streamline the parts of the Legacy appeals system that typically increased wait times.  In the old appeals system, VA was unable to keep up with its workload while serving veterans in a timely manner.  The number of claims received increases every year, adding onto the current VA backlog.  However, AMA is working towards significantly reducing the current Legacy appeals backlog.  According to VA, there are roughly 200,000 Legacy appeals pending.  VA’s overall plan is to resolve all Legacy appeals by the end of 2022, including all the remanded cases that currently exist.  To achieve this goal, VA has hired many additional adjudicators to assist both the Veterans’ Benefits Administration and the Board of Veterans’ Appeals (e.g., Veterans Law Judges, staff attorneys).  Furthermore, VA has encouraged veterans to file claims and appeals under AMA to prevent additional backlog.

In contrast to the Legacy system’s linear appeals process, AMA allows veterans to choose which of three appeal lanes will be most appropriate for their claim.

In the higher-level review lane, veterans’ claims will be reviewed “de novo” (i.e., new look).  This means that a senior claims adjudicator at VA will take a look at the veteran’s entire claims file.  In this lane, the record is closed, meaning veterans cannot submit new evidence.  The higher-level reviewer will look only at the records already in the veterans’ file at the time of the initial decision.  If the VA denies a claim in a higher-level review decision, the veteran can appeal to the supplemental claim lane or the Notice of Disagreement lane within one year.

In the supplemental claim lane, veterans must submit new and relevant evidence to be reviewed by adjudicators at the VA Regional Office.  If the VA denies a claim in a supplemental claim decision, the veteran can appeal to the higher-level review lane or the Notice of Disagreement lane within a year.

Notice of Disagreement Lane (i.e., Appeal to the Board of Veterans’ Appeals)

In the Notice of Disagreement (NOD) lane, veterans can take their appeals directly to the Board.  At the Board, claims are reviewed and adjudicated by Veterans Law Judges.  Within the Board lane, veterans must choose between three dockets: the evidence docket, direct docket, and hearing docket.  The direct docket does not allow for the submission of new evidence, while the evidence and hearing dockets do.  Specifically, if the veteran chooses the evidence docket, they can submit evidence with their NOD or within the 90 days after sending in the NOD.  Additionally, veterans in the hearing docket can submit evidence at the time of their hearing, or within the following 90 days.  If a veteran is denied in a Board decision, they can either: (1) appeal within 120 days to the to the Court of Appeals for Veterans’ Claims (CAVC) or (2) file a supplemental claim within one year to preserve their potential effective date.

In the Legacy appeals system, both at the Regional Offices and the Board, VA was held to a lesser standard of proof when explaining why a claim was denied, granted, or remanded.  One of the notable advantages of AMA is a new decision format requiring Regional Offices to clearly explain their favorable findings, because such findings become binding on the agency.  For example, if VA found that a veteran incurred an injury during service, that information would be explicitly stated in the final decision.  This finding would be binding, meaning that it will apply to all future adjudications.  That is, VA will have to apply this information to all subsequent decisions.  Furthermore, it allows veterans to shape their approach to providing evidence.  In this example, the veteran no longer needs to provide evidence of an in-service event since VA has already conceded that element of service connection.  Instead, the veteran can focus on providing evidence of a current diagnosis and a medical nexus opinion.  VA should include this information in its decisions as well.

AMA Statistics – Claims and Appeals By the Numbers: Are Veterans Receiving Decisions Faster?

During Quarter 4 of Fiscal Year 2019, VA made decisions on just under 400,000 claims.  Decisions seem to be coming out much faster than they used to.  Specifically, VA established a 125-day goal to decide on initial claims, and it has been completing them in only 90 days.  VA has continued this progress in Quarter 1 of Fiscal Year 2020, distributing nearly $30 billion in benefits and serving close to 5 million veterans.  As for the legacy claims backlog, there are 64,783 claims pending as of November 2019.  However, this represents a significant decrease from previous years.  VA plans to resolve all legacy claims and appeals by 2022.

However, as of June 2020, VA has begun to stray away from its 125-day goal.  That is, veterans are no longer seeing supplemental claims being adjudicated within that timeframe.  On the other hand, higher-level review claims continue to be adjudicated more quickly, likely due to the fact that there is a closed record (i.e., no new evidence is submitted).

VA has completed 34.7 thousand claims for dependency and indemnity compensation (DIC) and Survivors Pension combined.  Claims for Survivors Pension are taking an average of 102 days to complete while DIC claims are averaging 93 days.

Despite the transition to AMA, VA continues to experience delays when it comes to scheduling and executing Compensation & Pension (C&P) exams.  This delay has been exacerbated by the onset of the COVID-19 pandemic.  VA is currently working to develop alternate mechanisms to ensure that veterans are undergoing C&P exams as required by their cases.  It is important to note that this delay in completing exams will likely contribute to a delay in the adjudication of veterans’ claims and appeals.

Although it has been roughly three years since AMA was initially planned and subsequently implemented, there is still quite a bit of confusion around procedural operations of the system.  Veterans’ advocates and representatives spend a significant amount of time reaching out to local regional offices and VA executives to try to get them to correct procedural errors.  While AMA presented a steep learning curve for VA employees, there was a substantial amount of training provided prior to implementation.  Additionally, training continues to be provided surrounding some of the more difficult subject areas.  Therefore, it is unclear as to why VA adjudicator accuracy has not improved as expected.

Is AMA Easier for Veterans to Navigate?

In theory, AMA is a simpler system; however, it is completely non-linear as compared to the Legacy appeals system.  Veterans are often overwhelmed by the claim stream, or what happens next after filing a certain type of appeal or receiving a certain type of decision.  Another major difference between Legacy and AMA involves VA’s duty to assist.  In the Legacy system, VA’s duty to assist applied throughout the claims and appeals process until there was a Board decision.  However, under AMA, there are distinct periods of time when the veteran can submit evidence, when evidence can be considered, and when the duty to assist is triggered.  And so, knowing when and how to submit evidence in the new appeals system can be very challenging and complicated, especially for an unrepresented veteran.  Again, there are many benefits to AMA in that, if a veteran can figure out how to navigate the system and continuously prosecute their appeal, it may be more efficient.  Yet, in reality, the AMA system remains far from simplified.

What is Actually Working Better in the AMA?

One of the main benefits of AMA is that veterans can now file one appeal directly to the Board if they feel that their claim is fully developed, and they do not want to add anything to the record.  In this case, veterans will receive a faster decision than they would in the Legacy system as long as they do not opt into the evidence or hearing dockets.

Which Is Better: Legacy or AMA?

Again, VA has emphasized that AMA is a better process for veterans pursuing VA disability benefits as it addresses long wait times and delays and offers more choice and control.  However, AMA is still a relatively new system and the pros and cons are not yet fully understood.  While it does seem as though AMA has many advantages, VA is still struggling to remain consistent in its processing and adjudication of claims and appeals.

Ultimately, the answer is: it depends.  AMA does seem to be faster for veterans despite recent delays with supplemental claims.  Even though VA is not meeting its original targets, it is still moving faster as compared to the old system.  Nonetheless, it appears to be a more complicated system for veterans regardless of being advertised as “simplified” and “streamlined.”

Overall, the answer is: it depends.  As such, it may be beneficial to consult with either a Veterans Service Organization, VA-accredited attorney, or VA accredited agent to talk about your options and what makes the most sense for your individual case.