A Background on the Persian Gulf War

The Persian Gulf War was an offensive led by U.S. and coalition troops, occurring between August 2, 1990 and April 6, 1991. This conflict was spurred by Iraq’s invasion of Kuwait under the regime of Saddam Hussein in August of 1990. Approximately 697,000 U.S. troops were deployed to the Gulf region during this conflict.

According to VA’s website, two main operations were conducted during the Persian Gulf War: Operation Desert Shield from August 2, 1990 to January 16,1991 and Operation Desert Storm from January 17 to April 6, 1991 when a cease fire was signed. The final United States troops participating in this conflict returned on June 13, 1991.

It is important to note that Post-9/11 veterans of Operation Iraqi Freedom and Operation New Dawn are also considered to be Gulf War veterans. VA defines Gulf War veterans as those “who served on active duty in the Southwest Asia theater of operations any time from August 2, 1990 to present.”

About 622,000 of the 697,000 troops deployed during the Persian Gulf War of 1990-1991 are eligible for VA health care; about 286,000 (41%) of which, actually use the VA healthcare system. PGW veterans often experience similar medical conditions, as shown by the following infographic from VA’s website: 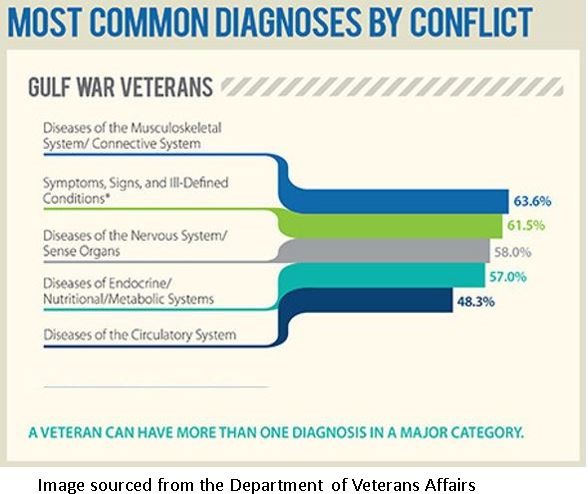 Veterans deployed to the Southwest Asia theater of operations during the Gulf War era more often experience diminished health than those who served during the same time period, but did not serve in the Gulf. Often reported are clusters of medically unexplained chronic symptoms such as fatigue, joint pain, headaches, insomnia, indigestion, dizziness, respiratory disorders, memory impairment, and skin problems. VA refers to these clusters of symptoms as “Chronic Multisymptom Illness (CMI)” and “Undiagnosed Illness.”  More commonly, these symptoms are referred to as “Gulf War Syndrome.”

Gulf War veterans (pre and post-9/11) who experience symptoms of Undiagnosed Illnesses and/or Chronic Multisymptom Illnesses such as Fibromyalgia, functional gastrointestinal disorders, or Chronic Fatigue Syndrome to a degree of least 10% disabling during active duty or prior to December 31, 2021 are presumed to have incurred the condition due to their Gulf War service. A 2016 epidemiological study by the VA Office of Public Health revealed that almost 44%, or 4 in 10, of PGW veterans are estimated to have “Gulf War Syndrome.”

Additionally, Gulf War veterans who develop any of a number of infectious diseases that manifest to a degree of at least 10% disabling within one year of service are presumed to have incurred the condition during Gulf War service. These diseases are as follows, according to VA’s website:

VA offers Gulf War veterans a free Gulf War Registry Health Exam in order to address possible health problems related to environmental exposure during service. During these examinations veterans are provided a health exam and physical, laboratory tests if needed, and asked about previous medical and environmental exposure history. Further evaluations are available to these veterans if new conditions surface.  In total over 181,914 Gulf War Registry Exams have been conducted.

This exam is NOT an assessment for compensation purposes. Veterans seeking disability compensation for conditions incurred during Gulf War service will be likely be required to attend a separate Compensation and Pension Examination.