What Are Mood Disorders?

With the update of the Diagnostic and Statistical Manual of Mental Disorders, Fifth Edition (DSM-5) in 2013, mood disorders are now separated into two groups: (1) bipolar disorder and related disorders and (2) depressive disorders.  Nonetheless, the above-mentioned mood disorders fall somewhere within those two categories.

Mood disorders can often lead to significant social and occupational impairment.  Generally speaking, symptoms of mood disorders may include the following:

Although there is no exact cause of mood disorders, research indicates that a variety of factors contribute to these conditions.  For example, chemical imbalances in the brain, as well as stressful life events (e.g., death, divorce, trauma), may both lead to the development of a mood disorder. 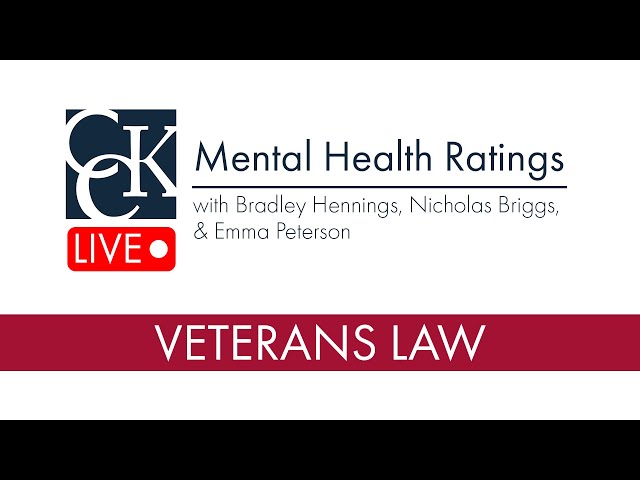 How are Mood Disorders Diagnosed?

Mood disorders should be diagnosed by a mental health professional, such as a psychologist or psychiatrist.  They may ask a series of questions related to an individual’s mood, recent life stressors, active symptoms, and level of impairment.  From there, the mental health professional will use the DSM-5 to make an appropriate diagnosis.  Oftentimes, a primary care provider will perform a physical examination and lab tests to rule out any physical reasons for mood-related symptoms in conjunction with the psychological evaluation.

The majority of individuals with mood disorders are able to return to a baseline level of functioning with proper treatment and intervention.  Treatments for mood disorders typically include a combination of psychotherapy (i.e., talk therapy), such as cognitive-behavioral therapy or dialectical behavior therapy, and medications.

To establish direct service connection for mood disorders, veterans must demonstrate the following: (1) a current diagnosis of a mood disorder; (2) an in-service event, injury, or illness; and (3) a medical nexus linking the current, diagnosed mood disorder to the in-service occurrence.  Most often, veterans must provide evidence of treatment records either during or following service to show the presence and severity of their mood disorder.  From there, VA will typically schedule the veteran to attend a Compensation & Pension (C&P) examination to obtain a medical nexus.

Secondary service connection is established when a veteran demonstrates that an already service-connected condition causes a subsequent condition to develop.  In this case, a veteran’s mood disorder may qualify as a secondary condition.  For example, a veteran has a severe back condition that limits them from engaging in their daily activities.  Due to the loss of autonomy, immobilization, and inability to engage in things they enjoy, the veteran begins experiencing symptoms of depression.  Several months later, the veteran is diagnosed with major depressive disorder.  The veteran’s major depressive disorder may qualify for service connection on a secondary basis seeing as it developed as a result of their already service-connected back condition.

Aside from eating disorders, VA rates all eligible mental health conditions using the same diagnostic criteria outlined under 38 CFR § 4.130.  Specifically, mental health conditions are rated at 0, 10, 30, 50, 70, or 100 percent using VA’s General Rating Formula for Mental Disorders.  These ratings are based on the level of social and occupational impairment caused by the condition.  For example, a veteran experiencing mild symptoms, or whose symptoms are well controlled by continuous medication, may receive a disability rating of 10 percent.  Veterans with more severe symptoms, such as an intermittent inability to perform activities of daily living, may receive a 100 percent disability rating.

Importantly, veterans are not required to meet all, or even any, of the criteria in a rating level to qualify for that rating.  Since mental health conditions can manifest differently per individual, VA’s rating formula for mental health conditions is not binding.  Instead, symptoms listed in each level of the rating formula are simply examples to demonstrate the types and levels of impairment commonly found at that assigned percentile rating.