How to Appeal Your Denied VA Disability Claim When veterans receive an unfavorable decision from VA, they have the option to appeal and seek a more favorable outcome.  The process of appealing a denied VA claim is different when it comes to the old “Legacy” appeals system and the new VA appeals system set in place by the Appeals Modernization Act.  The appeals process under each of these systems is outlined below.

How Do Appeals Work?

A veteran may file an appeal if their original claim was denied, or if they are not satisfied with the rating and/or effective date they have been assigned.  Importantly, the veteran must appeal the decision in a timely manner, otherwise it will become finalized.  Veterans must appeal an initial claim within one year.

Filing the appeal within the one-year window is important because it preserves the claim.  By appealing in a timely manner, the veteran does not have to file a new claim and the effective date of the original claim is preserved.  This means that the effective date, or the date that VA will pay the veteran from, does not change, even though the decision is being appealed.

If the appeal later results in a decision that grants the veteran benefits, VA must pay the veteran retroactive benefits starting from the effective date.

Prior to filing the appeal, the veteran may want to assemble all the documentation needed to win the case.  For example, some cases may need to link the veteran’s service to the claimed condition.  Others may need to provide evidence as to the severity in order to be awarded an increased rating.  Gathering all the appropriate evidence will help the veteran make a compelling case to VA, indicating why they are entitled to disability benefits.

There are two systems under which a decision can be appealed: Legacy or AMA.  AMA stands for Appeals Modernization Act, which was passed in 2017 and created new options to modernize the claims and appeals process.  The other system, Legacy, refers to the system which was in place before it.

Appealing Under the AMA Appeals System

Under the Appeals Modernization Act, a Rating Decision will still be issued after every initial claim is filed.  However, if a veteran disagrees with VA’s decision, they are no longer bound to the 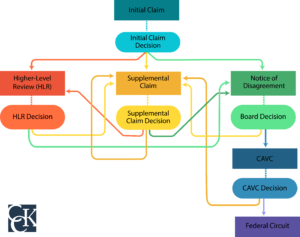 linear process described above.  Instead, veterans have multiple appeal options from which they can select the one best suited to the unique needs of their case.  If, after an appeal, a veteran receives another unfavorable decision, they have different appeal options depending on from which lane the decision came.

The three appeal lanes under AMA are:

2. Supplemental Claim Lane: If a veteran receives an unfavorable Rating Decision in the supplemental claim lane, they have one year to file an appeal in any one of the three lanes available.  Importantly, there is no limit on the number of supplemental claims a veteran can file, but they must submit new and relevant evidence in order to do so.

The Legacy appeals system only involves one “lane” in the veterans’ claims process.  In other words, all veterans appealing unfavorable decisions will go through the following steps:

2. Local Regional Office will issue a Rating Decision that grants, denies, or partially grants the claim.

4, Veteran then waits for a Statement of the Case (SOC), explaining why the claim was denied or only partially granted.

5. Veteran has 60 days from when VA issues the SOC to file a VA Form 9 Substantive Appeal to the Board of Veterans’ Appeals.

6. The Board will then issue a decision granting, denying, or remanding the case for further action.

Will My Appeal be Processed Under Legacy or AMA?

If the veteran received a rating decision after February 19, 2019, the appeal will be processed in the AMA system.  However, it is possible to have appeals pending in both systems (Legacy and AMA), although they cannot be for the same condition.  This means that the veteran may not have an appeal pending for an increased rating for PTSD, for example, in both Legacy and AMA.  The appeal will need to be filed in either Legacy or AMA.  The veteran could, however, have an appeal pending for PTSD in Legacy and a back condition in AMA.

We Can Help Appeal Your VA Claim

Appealing a decision can be an arduous task.  If you are struggling with the appeals process, the CCK team may be able to help you.  We have handled many VA disability cases and understand the appeals process.  Contact our office at 800-544-9144 for a complimentary consultation.