The Committee on Veterans’ Affairs’ Subcommittees on Disability Assistance and Memorial Affairs and Oversight and Investigations held a joint hearing on April 27, 2022.

The hearing, titled “At What Cost? – Ensuring Quality Representation in the Veteran Benefit Claims Process,” addressed the ongoing matter of the “predatory practices” of unaccredited individuals and organizations.  These practices include charging veterans for assistance with their Department of Veterans Affairs (VA) disability benefits claims.

In addition, the VA Office of Inspector General, the Vietnam Veterans of America (VVA), Wounded Warrior Project, Minority Veterans of America, the Department of Justice, and other advocacy groups provided statements for the record.

The testimony and supporting documents are available to read or watch online.

The Deputy General Counsel for Veterans Programs and Deputy Chief Counsel of the Office of General Counsel (OGC) under VA presented information on the VA Accreditation, Discipline, and Fees program.

Importantly, the OGC discussed VA’s proposed legislation that would reinstate criminal penalties for any companies or individuals who charge unlawful and exorbitant fees for the preparation, presentation, and prosecution of VA benefits claims, except where otherwise authorized under VA regulations.  According to the OGC, implementing this legislation would create a stronger deterrent against unaccredited individuals and organizations.

Currently, VA does not have the authority to regulate or discipline unaccredited entities, and instead must rely on the Federal Trade Commission (FTC) and state-attorneys general.

The National Veterans Affairs and Rehabilitation Division of The American Legion asserted that certain unaccredited “for-profit enterprises” have taken advantage of veterans by promising faster results and more favorable outcomes, while charging exorbitant fees and evading VA regulations.  The American Legion stated their key concern is that VA does not have the authority to regulate unaccredited actors, allowing these individuals and companies to charge unreasonable fees without penalty.

The American Legion also emphasized that “predatory” companies use contracts that minimize their responsibilities to their clients.

The American Legion commended VA for their fraud protection campaign but asserted that more needs to be done to protect veterans from financial exploitation.

Executive Director of the National Organization of Veterans’ Advocates (NOVA), Diane Rauber explained that because unaccredited actors are not recognized by VA, they cannot legitimately gain access from VA to a veteran’s file, speak to VA on the veteran’s behalf, or receive mail about the veteran’s case.  Ms. Rauber referenced instances where unaccredited actors “coach” veterans to submit claims or submit them on their behalf by using their private passwords to their eBenefits accounts.  According to NOVA, these practices raise legitimate privacy concerns.

Some of them also have in-house medical providers or directly fund medical consulting companies, which raises ethical concerns.

In other circumstances, veterans are advised to drop their existing appeals in favor of “faster” claims for increased ratings.  According to NOVA, while this may result in a faster decision, it would be depriving the veteran of months or years of retroactive benefits.

The National Veterans Service, Veterans of Foreign Wars stated that if unaccredited claims preparation companies want to be officially recognized by VA, their staff should seek accreditation with VA and file all required Powers of Attorney, contracts, and fee agreements with the OGC.  The VFW emphasized that certain companies’ unwillingness to do so “speaks volumes to their intentions.”

The VFW also mentioned that “promising no-cost consultations or guaranteeing increases in benefits” can be considered predatory.  The organization recommended that VA examine these “marketing schemes” for potential violations under the Program Fraud Civil Remedies Act of 1986.

Additionally, the VFW discussed how certain contracts include clauses that prevent veterans from speaking negatively about the companies or disclosing terms of agreements.  Regarding this, the VFW asserted that claims consultants should not request that veterans sign contracts if they are unwilling to sign a Power of Attorney.

VFW also mentioned that some claims preparation companies have changed their names to evade complaints filed by veterans through the Better Business Bureau.

Veterans Guardian, a veteran-owned and operated company, refers to itself as an “evidence-based medical claims consulting firm.”  In their testimony, Veterans Guardian claimed that “no veteran chooses their service without fully understanding their options and how the business works.”  The company asks veterans to sign a document acknowledging that while there are free services for filing a claim, the veteran is instead agreeing to an “unaccredited fee-based service.”

Veterans Guardian also promises a 2 to 4-month average VA decision wait time, despite being unable to predict VA’s timeline for decisions.  It is important to note that by law, a representative cannot guarantee any outcome in a case, as it is considered unethical.  In addition, Veterans Guardian charges fees based on veterans’ future benefits, which VA prohibits accredited representatives from doing under 38 CFR § 14.636.

VA Claims Insider, who was asked to attend the hearing, declined to appear before the committee.

Supporting Statements for the Record

Other VSOs and veteran advocacy groups provided supporting statements, also discussing the “predatory practices” of unaccredited companies.  In a Statement for the Record, the Vietnam Veterans of America (VVA) spoke about the claim preparation companies that do not adhere to VA guidelines and present themselves as “medical consultants.”  These companies, who admit to being unable to offer legal expertise, promise to provide nexus opinions.

According to VVA, since these companies and individuals are unable to access a veteran’s VA claims file (only accredited individuals can do so), any medical nexus opinions they produce will most likely not take “relevant records into consideration,” which would lead to a VA denial.

VVA opposed the idea of claims preparation companies being offered a new category of accreditation, as the current system already has options for claim preparation at no cost to the veteran (e.g., accredited VSOs, attorneys, and claims agents).

Read the Statements for the Record in full.

What Does this Mean for Veterans Moving Forward?

As we wait to see the Committee on Veterans’ Affairs’ and VA’s next steps regarding this issue, veterans are encouraged to choose a VA-accredited representative or VSO when seeking VA claims assistance to avoid predatory claims companies.  VA-accredited representatives include attorneys, accredited claims agents, Veteran Service Organizations (VSOs), and state or county government entities that are legally authorized by VA to assist veterans in the pursuit of benefits.

It is also important to understand when and how much a representative can charge according to VA regulation, and avoid representatives who ask for personal information, such as login information to accounts.

Claimants can use the VA Office of General Counsel (OGC) database to find out if the representative who wants to help them is accredited. 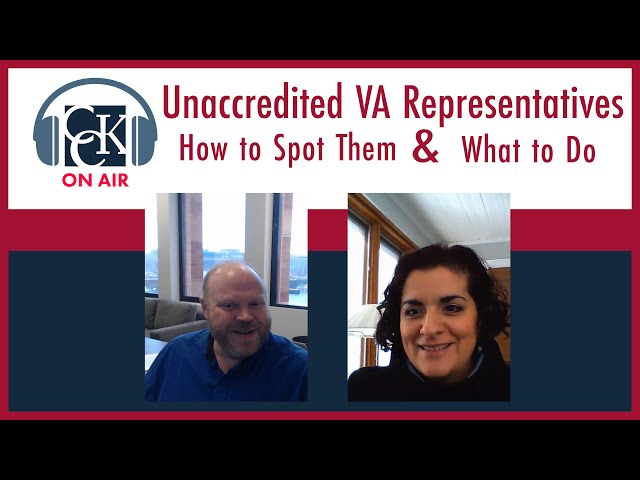 How to Report an Unaccredited Actor

To file a complaint against an organization or unaccredited individual who charged a veteran or claimant outside of the statutory scheme, start by contacting one of the following offices: