Stewart v. Wilkie was argued before the Court of Appeals for Veterans Claims (CAVC) and dealt with presumptive service connection for Gulf War veterans who have a medically unexplained chronic multisymptom illness (MUCMI).  The CAVC agreed with CCK’s arguments and ruled in favor of Mr. Stewart; however, VA initially appealed this case to the Court of Appeals for the Federal Circuit.  After several months, VA filed a motion with the Federal Circuit to have the case dismissed, meaning it is no longer going to pursue the appeal.  Therefore, the CAVC’s decision, which was favorable to both Mr. Stewart and Gulf War veterans nationwide, now stands as law.

Mr. Stewart served in the United States Army from December 2003 until February 2005, including service in Southwest Asia from February 2004 to January 2005.  During his time in service, Mr. Stewart was surrounded by burn pits and exposed to smoke from burning waste, as well as sand and dust.  Following service, he filed a claim for service connection for asthma and later attended a VA medical examination to address whether his condition could be classified as a MUCMI.  The examiner concluded that it was less likely than not that Mr. Stewart had a MUCMI because the etiology of asthma is “partially understood.”  Both the Regional Office and subsequently the Board of Veterans’ Appeals denied Mr. Stewart’s claim on that basis.

CCK appealed to the CAVC, arguing that the Board misinterpreted the law and relied on an inadequate VA examination to deny Mr. Stewart’s claim.  Specifically, asthma in general may have a partially understood etiology, but it can also be without conclusive etiology too.  Furthermore, VA took the position that a MUCMI is a diagnosed illness that lacks both a conclusive pathophysiology (the process by which a disease works in the body) and a conclusive etiology (cause of a disease) – a stance that is in stark contrast to the plain meaning of 38 CFR § 3.317.  This regulation comes from the Gulf War presumption statute that Congress enacted to expand and give benefits to veterans coming back from the Gulf War with a variety of symptoms that resulted in either an undiagnosed illness, or a diagnosed illness without a known cause.  38 CFR § 3.317 clearly defines a MUCMI as a diagnosed condition without a conclusive pathophysiology or etiology. 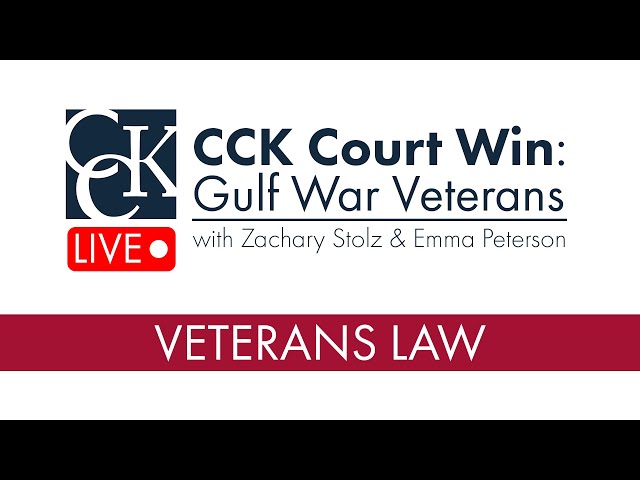 VA’s Interpretation of the Regulation

According to VA’s interpretation of the above-mentioned regulation, a MUCMI must lack both a conclusive pathophysiology and etiology.  This narrow interpretation limits countless veterans from presumptive service connection as it places greater constraints on the classification of MUCMIs.  By requiring veterans to have both a conclusive pathophysiology and etiology, VA was effectively barring veterans from the benefits to which they are entitled based on the actual meaning and purpose of the regulation.  CCK essentially argued that the use of “or” in the regulation was intended to expand veterans’ access to presumptive service connection.  Specifically, “or” implies that veterans only need one of the two requirements listed above thereby lowering the threshold.

Court Rules in Favor of Gulf War Veterans with MUCMI

Ultimately, the CAVC agreed with CCK that the plain meaning of the regulation is that a multisymptom illness is a MUCMI if either the etiology or the pathophysiology of the illness is inconclusive.  The Court also concluded that the determination of whether an illness is “medically unexplained” is particular to the veteran in each case, and therefore must be made on a case-by-case basis.

How This Decision Affects Gulf War Veterans with MUCMI

This precedential decision creates a much easier path to benefits for Gulf War veterans with MUCMIs.  VA now agrees to interpret the regulation in a way that favors Gulf War veterans and operates on a case-by-case basis.  There are now two definitive ways to establish a MUCMI (inconclusive pathophysiology or etiology) and VA must consider the evidence that is unique to each veteran’s circumstances in terms of their conditions.  Importantly, this decision is one of the first precedential cases in all of veterans law that deals with Gulf War veterans.  This represents a potential generational shift amongst veterans in which the Court is now adjudicating cases relevant to Gulf War veterans versus cases specific to Vietnam-era veterans.

Through Stewart v. Wilkie, the Court provided very clear instruction to VA regarding how 38 CFR § 3.317 is supposed to be applied, and that is to help Gulf War veterans who were deployed and are now suffering from debilitating conditions as a result.