What is the Appeals Modernization Act (AMA) and Why Was it Launched?

On February 19, 2019, the Veterans Appeals Improvement and Modernization Act (AMA) was officially implemented, thus ending the Rapid Appeals Modernization Program and phasing out the Legacy appeals system.  AMA restructured the way VA processes veterans’ disability compensation claims.  The modernization was done in an effort to simplify and streamline the Legacy appeals process, while giving veterans, their families, and survivors more choice in handling disagreements with VA decisions.  Following an unfavorable rating decision on an initial VA compensation claim, VA’s new disability appeals process allows veterans to choose from three different options, or lanes, when filing an appeal: (1) higher-level review lane; (2) supplemental claim lane; and (3) Notice of Disagreement lane (i.e., Appeal to the Board of Veterans’ Appeals).  Importantly, there are an additional three dockets at the Board from which veterans can choose: the direct docket, hearing docket, and evidence docket.  While there are a number of Legacy claims that are still active and following the old rules and procedures, all new decisions that came out after February 19, 2019 are in the new AMA system.

If you are in the Legacy appeals system and you receive a decision on a pending appeal, you have the option to opt into AMA.  There is a new appeal form in which you check a box opting into AMA and indicating which lane you want to be in.  However, you have the option to stay in the Legacy system if you receive an unfavorable decision on an existing Legacy appeal.

How Does AMA Work for Veterans’ Claims?

Under AMA, there will still be a Rating Decision after every initial claim is filed.  However, if a veteran disagrees with VA’s decision, they have one year to appeal by choosing one of the following three lanes:

After appealing through one of those three lanes, the veteran will then receive another decision.  Specifically, both the higher-level review and supplemental claim lanes will yield Rating Decisions while the Notice of Disagreement lane will produce a Board decision.

What was the Rapid Appeals Modernization Program (RAMP)?

Breaking Down the VA Compensation Numbers

As of 2019, just under 5 million veterans were receiving VA disability compensation, totaling around $22.5 billion in benefits.  When considering these numbers, it is clear that the VA benefits system is very large.  As a result, it often becomes very difficult to manage.  Historically, VA has experienced significant backlogs of claims and appeals.  AMA is aimed towards fixing the delays, streamlining the process, and eliminating veterans’ wait times.

While the backlogs continue to present a problem for VA, it is important to note that the claims backlog has decreased significantly over the past few years.  During Quarter 4 of Fiscal Year 2019 (FY 2019) VA made decisions on just under 400,000 claims.  Decisions seem to be coming out much faster than they used to, so VA is clearly moving things along.  Specifically, VA established a 125-day goal to decide on initial claims, and it has been completing them in only 96 days on average.

However, it is important to recognize that sometimes faster decisions just means you are getting a faster denial.  If this is the case, you have the right to file an appeal under one of the three lanes outlined above.

What is VA’s Inventory of Appeals in the Legacy System?

There are currently about 148,000 Notice of Disagreement appeals remaining in the Legacy appeals system.  This is still a decent number of appeals that VA is trying to work through.  Importantly, this number does not include cases that are waiting for a VA Form 9 Substantive Appeal.  Those appeals represent an additional 12,000 to 13,000.  Moreover, this is also excluding the cases that are sitting at the Board of Veterans’ Appeals waiting for decisions.  This total inventory is over 100,000, 60 or 70,000 of which include cases or veterans that are waiting for Board hearings in the Legacy system.  VA has plans to prioritize the legacy appeals cases and has proposed a timeline for doing so.

Right now, VA’s goal is to resolve all non-remanded legacy appeals by the end of 2020.  Furthermore, VA states it wants to get rid of legacy appeals altogether by 2022.  We are currently unsure whether that will happen, but that is what VA is predicting based on their timing and approximations.

This goal appears to be very optimistic seeing as remanded cases often take a significant amount of time.  Again, there are about 13,000 legacy appeals in the VA Form 9 stage.  This means that all of these cases would have to go up to the Board and be completed by next year, assuming none of them would need to be remanded back for procedural errors.  That is already a very short timeline, not taking into account the potential remand processes, which may involve obtaining additional Compensation & Pension (C&P) examinations.  It seems unlikely that VA medical centers would be able to process C&P exams at a quick enough rate to keep up with this decision deadline.

How Have Veterans Been Using the New Appeals System (AMA)?

Under AMA, about 75 percent of veterans have been filing supplemental claims.  Once again, the supplemental claim lane is at the Regional Office level and allows veterans to submit new and relevant evidence after receiving an initial decision.  Most veterans are choosing this lane after an unfavorable decision from VA indicates the evidence missing in their case.  For example, a veteran gets an unfavorable decision indicating that they are missing a diagnosis.  As a result, the veteran goes to their doctor and obtains a diagnosis.  This evidence would be considered new and relevant and therefore, the supplemental claim lane would be most appropriate.  The other 20 percent or so are opting into the higher-level review lane and essentially asking the Regional Office to take another look at their case.  It is important to note that the lane you choose to use should be based on the facts of your case.  However, it can be difficult to determine which lane is best.  Therefore, it may be beneficial to get assistance from a veterans service organization, veterans’ attorney, or VA-accredited agent.

So far, it seems as though the wait times under AMA are relatively short.  For supplemental claims, people are getting decisions within about 60 days.  For higher-level review, veterans are receiving decisions in about 40 days.  Initially, VA’s goal was to issue decisions for these lanes in about 125 days.  Therefore, VA is cutting that goal in half.  However, that is not to say the decisions are favorable.  As such, it is still important to monitor the quality of the decision you are receiving.  Moreover, these decisions are coming from VA’s Regional Offices, not the Board of Veterans’ Appeals.

Results from the Board of Veterans’ Appeals

In 2019, BVA decided about 95,000 claims, exceeding their goal by 5,000.  This increase in decisions is significant, seeing as four years ago VA was only issuing 35-38,000 decisions annually.  The higher number of decisions is in part due to an increase in the number of employees at the Board.  Specifically, Board staffing has gone from around 540 full-time employees to around 1,250.

Hearings at the Board of Veterans’ Appeals

Veterans who appealed to the Board and requested a hearing are still experiencing the longest wait times as VA has given these cases last priority.  Initially, VA estimated veterans could wait from 3-5 years for a hearing under AMA.  However, the number of hearings VA held this year is up 38 percent from last year, which is a good sign for veterans.

One of the big steps VA will be taking in the future is to begin deciding all of the Blue Water Navy veterans’ claims.  After the Federal Circuit decided the case of Procopio v. Wilkie and Congress enacted the Blue Water legislation, all Vietnam veterans that served within 12 nautical miles of the line of demarcation will be afforded the presumption of exposure to Agent Orange.

Is AMA Better for Veterans?

VA has emphasized that AMA is going to solve a lot of delay and problems that were present in the legacy appeals system, and offer more choice and control to veterans.  However, there is still debate as to whether or not AMA is actually better for veterans.  The answer is: it depends.  AMA is still in its early stages after only one year of being fully implemented.  There are definitely many advantages to the new system, but there are still inconsistencies within claims and appeals processing, as VA personnel is still learning the system.  As such, whether AMA is better for veterans is typically decided on a case-by-case analysis.  It may be beneficial to consult with either a Veterans Service Organization, VA-accredited attorney, or VA-accredited agent to talk about your options and what makes the most sense for your individual case. 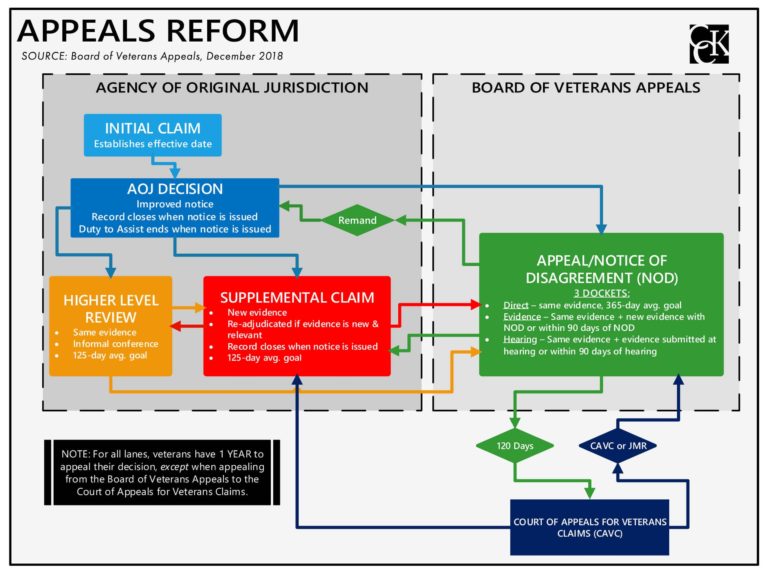