What is a BVA Docket Number? Board of Veterans Appeals 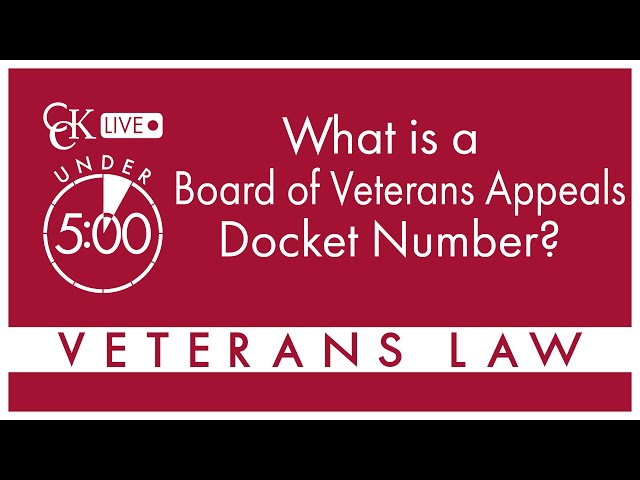 Kayla D’Onofrio: Welcome to CCK Live Under 5:00. I’m Kayla D’Onofrio, and today I’m going to be answering the question “What is a Board of Veterans’ Appeals docket number?”

For some general background, the Board of Veterans’ Appeals, also called the Board or the BVA, is an entity that conducts hearings and decides claims for veterans benefits once they’ve been appealed from the Agency of Original Jurisdiction which is usually the VA Regional Office. Adjudicators at the Board, which are called Veterans Law judges, make a decision regarding the veteran’s claim based on the evidence that is of record. The Board’s goal is to conduct a de novo review, meaning a fresh look at the veteran’s case without necessarily giving deference to those previous rating decisions or decisions that have been made.

One thing to keep in mind is that there are different dockets within the Board. So, if you have a Legacy appeal, there is a docket specifically for Legacy appeals. If your appeal is under AMA, there’s a specific docket for those AMA appeals. And then within the AMA, there are three separate dockets depending on which docket option you choose, whether you choose the direct docket, the evidence docket, or you’ve requested a hearing before the Board. And depending on which docket you choose, you’ll be assigned to a different docket number, and it may vary in the length of time it takes the Board to actually make a decision on your case. So, just something to keep in mind that there are variations depending on which docket you’re on.

Once you have been assigned a docket number, you can submit a motion for advancement on the docket or an AOD if you’re suffering from unusual hardship or other sufficient cause. And this is essentially just asking the Board to expedite its review of your appeal, or asking them to make your docket number a little bit sooner to get a quicker decision.

AODs can be submitted under certain circumstances, such as serious illness including COVID-19; financial hardships such as bankruptcy, foreclosure, or homelessness; advanced age which before the Board is 75 years or older. Please keep in mind this is a different number than what VA or what the Regional Office uses to consider advanced age. At the Regional Office, that number is 85 years or older. At the Board, it’s 75 years or older. If you have been affected by a natural disaster, such as a hurricane, a tornado, or a flood, or if there’s some sort of administrative error that resulted in significant delay in your appeal being added to the Board’s docket.

For any motion for advancement on the docket to the Board, you must also include your appropriate supporting evidence or documentation for your reasoning for the advancement. So, for example, if you’re suffering from a serious illness, you will need some sort of a physician’s statement speaking to the severity of your illness, whether it’s terminal or not. Or if you’re experiencing financial hardship, just some sort of notice showing evidence that you are actually under financial hardship, such as the late fees or late statements, bankruptcy, foreclosure notices, evidence of eviction, anything of that nature. Just something that would sort of substantiate that you are under the hardship that you’re seeking advancements for.

So, I think that’s a good place for us to close out today. Thank you so much for tuning in. More information can be found on our blog at CCK-law.com. And also be sure to check out our other videos on YouTube. Thank you.