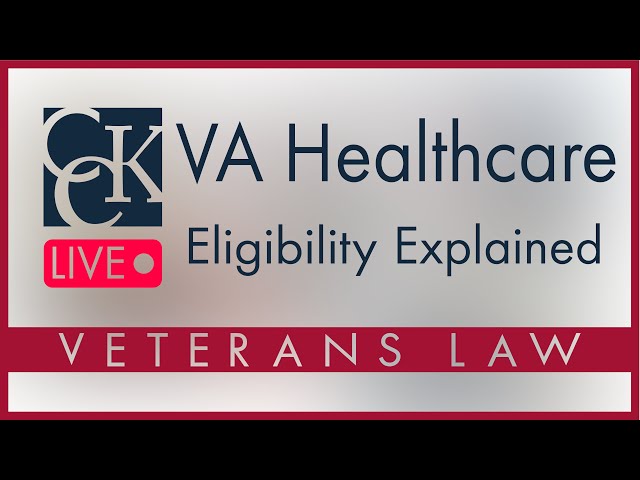 Emma Peterson: Welcome to another edition of CCK Live.  My name is Emma Peterson, and today I’m joined by Nick Briggs and Frank Padula.  And we’re going to be discussing VA health care eligibility.  This should be a really interesting topic.  Not one that we typically represent our clients on, but really important nonetheless.  So, let’s dive right in.

So Frank, give us a brief overview of VA health care.

Frank Padula: Definitely.  So, the Veterans Health Care Administration, or VHA for short, is actually the largest integrated health care system in the United States.  It provides care at over 1,200 facilities and helps over nine million veterans across the country.  And each VHA facility is staffed with patient advocates who can answer any questions veterans may have about the health care system.  And this health care system may include services related to vision and hearing, dental care, health exams, and education, inpatient services, for example, may it be surgeries, mental health services, and even more than that.

Emma: Hey, Nick, can you tell us some of the requirements for VA health care?

Nick Briggs: Sure, Emma.  So, first, to qualify for VA health care, veterans need to have served in active military and naval or air service.  They need to have received an other than dishonorable discharge and be service-connected for a qualifying condition.  Importantly, for the baseline eligibility, the rating doesn’t matter as long as there’s a service-connected condition that can qualify for benefits.

In terms of other requirements, a veteran, if they enlisted after September 1980 or entered active duty after October 1981, they must have served either 24 continuous months or the full period for which they were called to active duty in order to be eligible.  However, there are some exceptions to this minimum duty requirement rule.

These exceptions include if a veteran was discharged due to a disability that was caused or made worse by their service, or if they were discharged for a hardship reason, or finally if they served prior to September 1980.

So Frank, can you tell us about the different tiers of priority?

Emma: Great.  Nick, can you walk us through priority groups 3 and 4?

Nick: Absolutely.  So, for priority group 3, the veterans need to meet one of three criteria. Either be service-connected between 10 and 20 percent, be a former prisoner of war, or be a Purple Heart recipient.  However, additional members of this group may also be eligible if they were discharged from service due to a disability that was work caused or worsened by service, or they were awarded special eligibility classification under chapter 1151.

And then for priority group 4, we’re talking about veterans who received benefits for either housebound status or Aid and Attendance benefits, and then finally veterans who VA has determined to suffer from a catastrophic disability are also eligible.

Emma: For priority group 5, and as you can see there are a lot of priority groups. So stick with us, as a couple more to go.  Priority group 5 are veterans who are receiving pension benefits.  So, non-service-connected pension.  Or are also eligible to apply for Medicare, qualify for a priority group 6.  Veterans who are not service-connected or our service and did a non-compensable level, so, they have a bunch of 0 percent ratings, are also eligible under this category.  But it’s based on VA’s geographically adjusted income limits.  So, that can fluctuate depending on where you are in the country.

And then priority group 6 is comprised of veterans that meet one of the following requirements, service in Vietnam between January 1962 and May 1975, Persian Gulf War veterans, who served on active duty military service between August 2nd, 1990 and November 11th, 1998.  So, PG1.

There are also includes veterans who are veterans of World War I or the Mexican border period.  I don’t know how many we have out there and watching this particular broadcast.  But if you know a member of that group, they’re in priority group 6.  For folks who’ve been awarded a 0% compensable rating, which also seems to overlap with group 5.  So again, the ins and outs of that and it’ll be on this discussion.

But for folks who are at a 0 percent related to active duty service, if you were exposed to an herbicide like Agent Orange, you qualify under group 6.  You are currently or previously part of project 112 or a SHAD participant.  If you were exposed to ionizing radiation.  If you complete at least 38 days of active duty military service at Camp Lejeune, between 1953 and 1987.  If you are a Veteran or active-duty military service member who served or is serving after November 11th, 1998.  And those who are actively discharged after January 28, 2003 are going to receive enhanced post-discharge benefits for five years.

So again, these are all sort of minimums, not maximums.  So, you’re going to at a minimum meet priority group 6, but you might be bumped up depending on what else you have.  So Frank, can you take us through the last two priority groups?

Emma: All right.  Thanks, Frank.  Alright, Nick.  I think probably the most important part of the broadcast today, how does one enroll in VA health care?

Nick: So,  pretty straightforward here.  VA has one specific form for it.  You know how VA loves their forms.

Nick: So, in this particular case it’s VA form 10-10EZ.  Fill out the form to the best of your ability and then file it either by mail, in person, or online.  If you do choose to submit it by mail, you should send it to the health eligibility center, addressed to the enrollment eligibility center specifically, at 2957 Clairmont Road, Suite 200 in Atlanta, Georgia, ZIP code 30329-1647.

Emma: Great.  Thanks, Nick.  So, where this really comes into play for us in our practice is that you know, as your journey through getting service-connected disability benefits changes, you know, your health care priority group might change.  So, then the increase in benefits or decrease in benefits, if you move locations, that might have an effect on your health care.  So, just keep that in mind and keep an eye out for any changes, because health care coverage is obviously super important.  Nick, any final thoughts for those watching out there today?

Nick: As you mentioned, this is a bit different than a lot of the compensation claims that we usually handle.  And oftentimes, the best place to get answers to your healthcare-related questions is to just go and see your patient advocate at your local VA hospital or clinic.  They will have more answers for you than we might.

Emma: Absolutely.  Frank, what about you, any final?

Frank: I just agree with Nick.  You know the VA patient advocates, that’s their job to help you with these sorts of questions, and also VA’s website might have some really good information about this as well.

Emma: Thanks, Frank.  And also our website, so please be sure to check out our blog. We’ll have more about this.  As always you can leave questions or thoughts in the comments and we’ll do our very best to get back to you, and don’t forget to subscribe to our channel.  Thanks so much for tuning in.