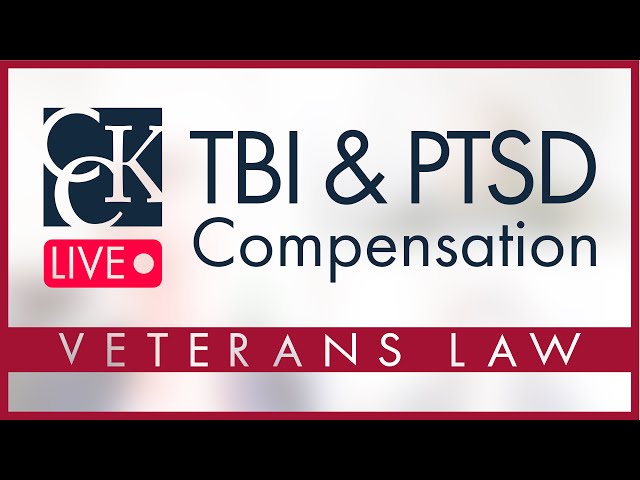 Emma Peterson: Welcome to another edition of CCK Live.  My name is Emma Peterson and today I’m joined by Amy Odom and Kaitlyn Degnan, and we are going to be talking about VA compensation for TBI, traumatic brain injury, and PTSD.  Let’s jump right in.

Amy, can you start us off by telling us what is a TBI?

Amy: Sure.  A TBI is a traumatic brain injury that can be caused by many factors including a blow to the head or an object penetrating the brain, and it results in brain dysfunction.  A common form of TBI is a concussion but not every concussion results in TBI.  That’s a medical determination that a doctor has to make whether a particular person’s concussion resulted in TBI.  Common causes of TBI include combat exposure and car accidents.

Emma: Kaitlyn, how did VA go about diagnosing TBI?

Kaitlyn: So, after a veteran suffers a TBI, they’re going to have symptoms and these will manifest cognitively, physically, behaviorally, and emotionally.  These residuals often include dizziness; headaches, impaired vision, or hearing loss; tinnitus; weak muscles; strokes, seizures, or paralysis; coordination, balance, and gait disorders; difficulty with written and verbal communication; impaired memory and difficulty concentrating; depression; or poor judgment.

TBIs are initially diagnosed as mild, moderate, or severe based on medical testing and the severity of the veterans’ symptoms.  And while mild brain injuries usually resolve themselves within about six months, there can still be significant residuals associated with more severe TBIs.

Emma: So, we will go about rating TBIs once they’ve been service-connected and we have a lot of material on our website and on our channel about how one goes about getting a service connection if you’re interested.  But VA goes about rating TBIs under 38 CFR 4.124a.  And the diagnostic criteria can be found in that regulation.  These residuals that Kaitlyn just talked about are going to be rated on scales of 0 through four – so, one, two, three, or total – in increments corresponding to the severity.

What VA does is they’ll look at 10 subcategories or facets in order to evaluate a TBI.  So, most likely you’ll have an examination by a VA examiner who’s qualified to do these examinations.  They’ll look at these 10 subcategories and they’ll rate you one to four depending on the severity in each category.  And your highest number, in any facet, will correspond to your disability rating, and those ratings can range from 0 percent all the way up to 100 percent.

So, the 10 subcategories that VA will look to when evaluating your TBI include impairment of memory, attention, concentration, and executive function, altered judgment, inhibited social skills, orientation to person, place, time, and situation, impaired motor activity, visual-spatial orientation – subjective symptoms that you might have aren’t included in this list – neurobehavioral effects, ability, communicate and consciousness.  We’re going to put up a link to some information for you if you want to read into these facets further, but just know that there might be other conditions associated with your TBI that one would think of – headaches or hearing loss – and those need to be rated separately under their own diagnostic code.  So, the world of TBI is really a sort of splinters out from the TBI and then its residual conditions.

There’s another regulation – 38 CFR 3.310 – that allows for presumptive secondary service connection if you are service-linked for a TBI.  So, let’s say, you’re service-linked for a TBI and you later on develop dementia, Parkinson’s, seizures, depression, or a hormone deficiency within a certain window of time, and you have to look to that regulation to see what those windows are, VA will automatically grant service connection for those conditions.

So, Amy, there’s a lot of overlap between TBI and PTSD.  So, why don’t you take us through what PTSD is?

Amy: Yeah.  So, PTSD, often also referred to as post-traumatic stress disorder or post-traumatic stress, is a mental health condition that occurs as a result of experiencing distressing, shocking, or otherwise traumatic events.  So, whereas TBI is a neurological disorder, PTSD is a mental health condition, and many veterans develop PTSD from events they witnessed or experienced during their military service.

Symptoms and severity of PTSD can vary from person to person.  Some people don’t have very many problems from it and others have very severe problems from it.  But common symptoms that we see are re-experiencing the trauma through intrusive distressing, recollections of the event, flashbacks, and nightmares – that kind of thing, emotional numbness, and avoidance of places, people, and activity that remind you of the trauma, as well as anxiety and depression and what we call increased arousal, which are things like difficulty, sleeping, and concentrating, feeling jumpy, and being easily irritated and angered.

Emma: So, Kaitlyn, how is PTSD rated?

Kaitlyn: So, in order for VA to grant direct service connection for PTSD, a veteran has to provide proof of a current diagnosis, a statement from that veteran about the stressor that occurred during service, and a medical opinion that the stressor was sufficient enough to cause PTSD from either a VA or VA contracted psychologist or psychiatrist.  Once that PTSD is service-connected, it’s then rated using the general rating formula for mental disorders, and these ratings range from 0 to 100% with intervals at 10, 30, 50, and 70%.

Emma: So, for those watching, you can probably see where we’re going with this. There’s a lot of connection between PTSD and TBI.  And numerous studies, including one by the AMA, the American Medical Association, knows that there is a strong connection between TBI and PTSD.  And that makes sense.  Oftentimes, the same traumatic event that caused your TBI is also a very stressful event that can result in PTSD.  And many of the symptoms between the two conditions overlap.  And due to this overlap, it can be challenging, particularly for VA, to appropriately rate a veteran who should be service-connected for both conditions as well as other secondary conditions.  So, for example, you might suffer from depression, sleep trouble, memory problems, and those can be a result of TBI.  They could be a result of PTSD or even both.  Additionally, as I mentioned, many veterans with TBI will develop PTSD from that event that caused the TBI.

How does VA go about rating PTSD and TBI if they exist together?

Amy: Well, the important thing to remember is that you can’t get two ratings for the same symptoms.  And the problem with PTSD and TBI is that they often cause the same symptoms.  So, one of the facets or the areas that Emma talked about that VA will look at with TBI is neurobehavioral disturbances.  And that’s things like inappropriate behavior, irritability, that kind of thing, but that is exactly what is also considered in the rating for PTSD.  And you can’t get two ratings based on that symptom.

So, another example is if you have a veteran who is service-connected for PTSD and experiences flashbacks, hypervigilance, social isolation, and severe sleep impairment with trouble falling and staying asleep, and is also highly irritable, that person’s PTSD rating probably takes these symptoms into account.  And if later it becomes clear that that veteran also suffered a TBI that causes sleep impairment and irritability, that person is not going to be able to get a separate rating for that TBI, unless there are additional symptoms caused by the TBI that are not already considered in the PTSD rating.

So, for example, if that veteran has headaches or some slowness in speech, or something like that, that’s not considered by the PTSD rating, you can get a separate rating for those symptoms.

Emma: So Kaitlyn, what kind of compensation are veterans looking at for TBI and PTSD?

Kaitlyn: So, just like any other disability, the VA is going to rate, give the veteran a rating, and that’s the level that they’re going to be compensated at.  So, for example, if a veteran is rated at a 100% disability rating, that equals $3,146 per month for PTSD or TBI, while on the other hand, a 50% disability rating would equal $905 per month.  A full list of compensation rates can be found online on our website.

Now, if VA is rating you for multiple conditions such as TBI and PTSD, the veteran will receive a combined disability rating that might result in increased compensation.  So, for example, if a veteran has a 30% rating for PTSD and a 10% rating for TBI, those would be combined using VA math to equal a 37% combined rating, which would then result in a 40% combined rating overall.  VA math is a little bit different than the typical arithmetic that you’re probably used to.  So, we would suggest checking out the VA disability calculator on our website if you’re more interested in that math.

Emma: Additionally, Kaitlyn, isn’t there a special benefit that veterans can receive, in terms of special monthly compensation, just for folks with TBI?

Kaitlyn: Yes, so veterans who suffer debilitating residuals of a TBI might qualify for SMC -T, which is an additional special monthly compensation reserved specifically for veterans who have suffered a TBI.  The criteria for this include that the veteran needs regular aid and attendance for those residuals of a TBI, that the veteran is not eligible for a higher rating of aid and attendance under SMC-R2, the veteran would need hospitalization, nursing home care, or other residential institutional care without the in homemade in attendance.  You can check out our blog post about this benefit as well if you’re interested in more information.

Emma: Great.  Thanks, Kaitlyn.  So, that really wraps up our discussion of TBI and PTSD.  Amy, any final thoughts?

Amy: Yes.  Don’t be discouraged from filing a claim for TBI if you have a diagnosis of TBI just because you are already service-connected for PTSD or some other mental health disability, because there are ways, as we talked about, to get separate ratings for TBI if your symptoms are distinct.

Kaitlyn: Yes, I would say that especially because this rating is so symptom-driven.  This is really an area where it’s so important to be really upfront and honest with your VA examiner, to be upfront and honest about the lay statements that you’re submitting, because of all the different ways that these residuals might be affecting you, that’s how VA is going to determine your rating.  So, providing that information is probably the most important thing that you can do here.

Emma: And piggybacking off of that, I would say that you should also speak with an accredited rep, a VSO, an attorney, or whoever you’re working with because this can get very complicated quickly and it’s unfortunate – I think in the area in which VA struggles to rate veterans appropriately, they often will combine the PTSD and TBI without doing an assessment to see if the symptoms can be separately rated.  They will perhaps not give you a separate rating for migraines if you have those in addition to a TBI and PTSD.  So, it really is an area where your benefits could add up quite quickly.  It just needs to be sort of laid out very clearly for VA in order for that to happen.  So, reach out to someone if you need assistance doing that.

But that really ends our discussion today of PTSD and TBI.  My name is Emma Peterson with Amy Odom and Kaitlyn Degnan.  Thanks for tuning in and be sure to subscribe to our channel if you’re interested in more VA benefits content.  Thank you so much.