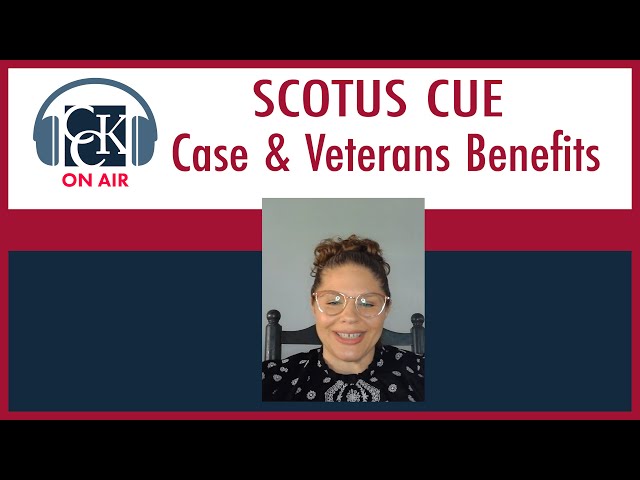 The name of the case is George vs. McDonough. And oral argument was recently heard at the Supreme Court.

What happened in this case is that after being medically discharged, Marine Corps veteran Kevin George filed for disability benefits in 1975 for schizophrenia. The VA Regional Office denied his claim and when he appealed, he was also denied by the Board of Veterans’ Appeals. He did not then have the opportunity to appeal to the Court because at that time, the law said that veterans could not appeal VA decisions to the Court. So, once he got the denial from the Board of Veterans’ Appeals, that was the end of his case.

And then fast forward, many years later in December 2014, the veteran petitioned the Board of Veterans’ Appeals to revise its 1977 decision denying the veteran’s claim for schizophrenia. And he did this based on a law that provides that a decision by the board is subject to revision on the grounds of clear and unmistakable error. In other words, it’s a law that provides claimants with the opportunity to go back to the VA many years after the VA’s decision and ask the VA to revise that decision, but the veteran must be able or the claimant must be able to show that the VA made a clear and unmistakable error. This is a very high bar.

If the claimant is successful though, he or she can be entitled to benefits all the way back to the date of the claim that was denied in the clearly erroneous decision. So, in this case that meant that Mr. George, if he were successful, could be entitled to benefits for his disability all the way back to 1975. So, we’re looking at like forty years there.

But since the 1975 decision, the VA determined that its regulation was in fact inconsistent with the statute and asked the Court to invalidate the regulation. And the Federal Circuit Court of Appeals did so in a case called Wagner vs. Shinseki. And in that decision, the Federal Circuit also said that the statute, section 11-11, clearly required both pre-existence and evidence of non-aggravation.

So, Mr. George’s theory was that the Wagner vs. Shinseki case simply said what the statute said this whole time, including in 1975 when the Board denied his claim. And that it was clear and unmistakable error for the Board to not apply the statute, even though the VA’s regulations said something else.

Unfortunately, the Board determined that the failure to apply 11-11 correctly was not clear and unmistakable error. And the Veterans’ Court and the Federal Circuit agreed with VA. But Mr. George then sought review of the Federal Circuit’s decision in the United States Supreme Court and that is where the case is now. Like I said at the top of the program, the Supreme Court just recently heard oral arguments and will be issuing a decision in the next few months.

So, what does this mean for the state of Veterans Law today? Well, the case presents the following question to the Supreme Court. When the VA denies a veteran’s claim in reliance on an agency interpretation that is later deemed invalid under the plain text of the relevant statutory provisions, is that the kind of clear and unmistakable error that the veteran may invoke to challenge the VA’s decision?

A main thrust of Mr. George’s argument is that a regulation that is inconsistent with the statute really isn’t the law, and the only law that was applicable at the time of the Board’s 1975 decision and Mr. George’s case was the Statute. The case really raises important issues about the retroactivity of judicial decisions interpreting statutes. In other words, whether a Court decision can apply to decisions by the VA that were made many years earlier. When the Court’s decision is about what the statute has always said.

Some implications from this case and how it’ll affect other veterans moving forward. Well, one of the government’s main concerns in this case is that if the Supreme Court were to come down in favor of the veteran, it could lead to a rise in claims and another rise in an already backlogged system. In other words, once people find out that they can file for a revision of a prior decision based on clear and unmistakable evidence because VA didn’t apply the statute correctly, the government says, a bunch of people are going to start filing new claims.

Personally, I think that’s unlikely. There aren’t a ton of statutes out there that VA has just been so blatantly misinterpreting like they did 11-11. So, another possible implication of a favorable decision in this case for Mr. George, is that it can help other veterans who were denied based on VA’s incorrect interpretations of statutes. But again, there aren’t a whole lot of those kinds of cases out there, because there aren’t a whole lot of statutes that VA misinterpreted the way they did this particular statute.

So, another possible implication is that really it could just return things to status quo prior to the Veterans Court’s decision in George, the judges on that Court routinely agreed with veterans that the VA had to also show clear and unmistakable evidence of no aggravation prior to when the regulation was invalidated because that’s what this statute has always required. So, if Mr. George wins here, then, you know, things could just be like they were before the Veterans Court’s decision in George.

So, in closing thoughts, this is a really exciting case. There aren’t a whole lot of veterans law cases that get up to the Supreme Court. This has been the first one in at least a decade. Actually, that’s not true. We just had one a few years ago too, which makes it even more exciting because that’s two in a decade. So, we’re watching this pretty closely.

CCK did participate in this case at the Supreme Court by authoring an amicus brief in Mr. George’s favor. And amicus means ‘Friend of the Court’. So, we were able to advocate for veterans that way. And we’re really looking forward to seeing how this decision turns out.

Thanks for tuning in.