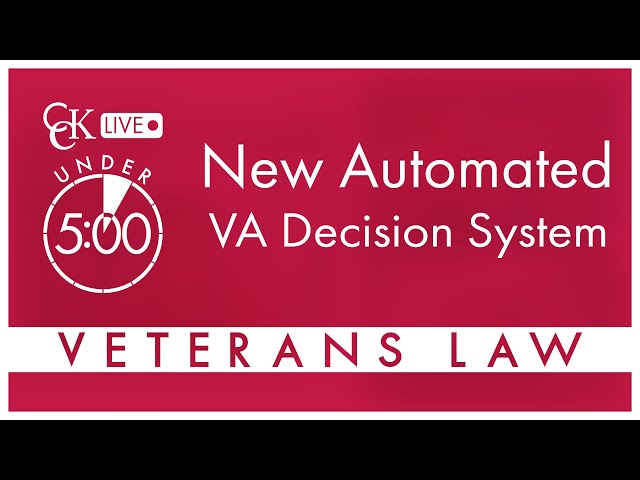 Brandon Paiva: Hello and welcome to another installment of CCK Live Under 5:00. My name is Brandon Paiva, and with me is my colleague, Matt Fusco.

And today, we’re going to touch on what VA’s New Automated Decisions System is, and explain the overviews, the implementation, and just overall some new aspects of what this is and what this potentially means for veterans.

So first, we’ll start by talking about an overview of what this new system is. VA has recently started a new initiative to modernize the claims process system and reduce the immense number of backlogs of claims and appeals that VA currently has.

This new system is aiming to automate the administrative workflows that VA currently has in place. In a recent press conference, VA has said that they have developed rules and algorithms in order to enhance and translate data into automated actionable outcomes and processes. Doing so would allow VA to determine the sufficiency or insufficiency of medical evidence contained in a veteran’s file.

Now, if this new system deems that the evidence is sufficient, this program is going to pre-populate a rating calculator and it’s also going to draft a proposed rating decision for the veterans’ condition. Now, if this system deems that the evidence is insufficient, the system is going to automatically request the appropriate exams to obtain the necessary medical evidence that is needed to render a final decision.

So, this system isn’t necessarily the end-all, be-all when it comes time to make a decision. The decision is sort of rendered as a suggestion and then it actually goes before a real person who is responsible for reviewing and implementing this decision.

Now, let’s talk a little bit about implementation. VA has created a model for this automated system based on claims for increased ratings for hypertension. This pilot was originally initiated in December at the Boise, Idaho Regional Office. And on average, they found that decisions for increased ratings for hypertension have been made in less than one week.

So now, I’m going to kick it over to my colleague, Matt, and he can talk about what VA’s goals are for this new system.

Matt Fusco: Sure. Thanks, Brandon. So per VA, the goal of this new system is really to create a better user experience for employees and veterans alike. All the while, while making decisions more accurately, fairly, and quickly.

Moving forward, VA hopes to expand automation in this regard to more conditions for increase. We’re thinking things specifically like, asthma, sleep apnea, or prostate cancer. And VA is also looking at how it would expand these automated processes for other types of claims, such as those related to things like toxic exposure.

In those particular types of cases, those will involve more elements of evidence and a little bit more involvement on that end of things. So some questions that we initially have to consider are, how is this new system going to impact veterans, specifically?

The hope I think, per VA, is to decrease claim timelines. However, we’ve realized that errors could still potentially exist in this system. Time will really tell here and it’s all very new and very speculative up to this point. We will be watching these decisions closely, as well as whether the program gets rolled out to more conditions and locations as we previously talked about.

So, it’s really kind of a work in progress right now. It’s very new and we’re going to stay tuned to see how this could potentially impact veterans in veterans’ claims.