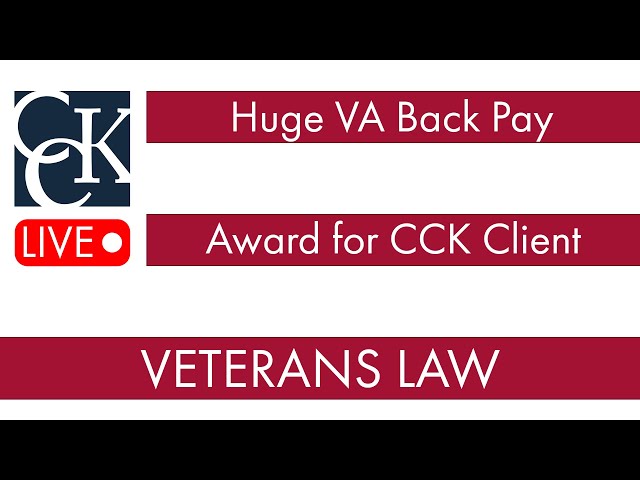 Amy Odom: Hey everyone, welcome to CCK Live. I’m Amy Odom. And in this video, I’m going to be breaking down the details of a recent CCK case that we’re very proud of.

In this case, we had a Veteran who served in the US Marine Corps from ’68 to ’70 as a field artillery cannoneer, including in Vietnam. In 1982, about 12 years after service, he filed a VA claim form requesting benefits for both his already service-connected hearing loss and his not-yet service-connected eye disease.

So, what VA did is it only awarded the Veteran pension based on his eye disease. He had been diagnosed at that point was legal blindness. Legal blindness at the time was rated by VA at 100% disabling. But instead of granting the Veteran disability compensation for the legal blindness, which would have gotten him a pretty hefty monthly check, they granted only a pension which only which did get him a monthly check but it was less than what he would get for compensation. The VA didn’t make any decision at all in the 1980s about entitlement to VA compensation.

The Veteran appealed the Regional Office’s decision to award him effective only 1982. The case went to the Board and the Board upheld the Regional Office’s decision that it’s only effective from 1982. The Board came to that conclusion because it determined that the 1982 application, the VA application form where the Veteran listed the vision disability as a condition for which he sought benefits and filled out the portions of the application form for both pension and disability compensation, the Board found that was only a claim for pension as it related to the vision disability. And it was only a claim for disability compensation as it related to the already service-connected hearing loss.

So CCK took that case, that Board decision up to the veterans court. The United States Court of Appeals for Veterans Claims is the only court in the nation that has the power to review all decisions on disability or any type of VA benefit. So, CCK took that case up to the veterans court. We had to find formal briefs arguing why VA was wrong to say that the 1982 application form was not a claim for disability compensation for the vision disability. And VA’s attorneys fought us on that and filed their own formal brief defending the Board’s conclusion that 1982 application did not cover disability compensation for the blindness.

But the Court didn’t go so far as to reverse the Board’s decision and order the VA to pay this Veteran his benefits from May 1982. Instead, the judge determined that the Board had to look at the evidence again, apply the law correctly, and come up with a new decision. So, it went back to the Board, and unfortunately, the Board again denied benefits back to 1982 and, again, ruled that the Veteran intended and believed that he was applying for a non-service-connected pension for bilateral blindness and service-connected compensation for hearing loss.

Now, this is the exact opposite of what the judge said when we went up to court. The judge said there is no evidence in the claims file supporting a conclusion that the Veteran was seeking only pension for the blindness. So, obviously, we felt that this was a poor decision again, and so we assisted the Veteran in taking that Board decision back up to court.

This time, before we even had to file a single formal brief, VA’s attorneys agreed with us that the 1982 application was in fact a claim for disability compensation for the blindness. They agreed to give him the effective date of 1982 for the award of service connection for the blindness, and we believe this means that he will be entitled to retroactive benefits of over 25 years for his bilateral blindness. That is a really, really satisfying outcome for us. We worked really hard on this case and we really wanted to see this outcome, and we hope that it is a very satisfying outcome for the Veteran as well.

So, how does this quick case reflect on the Board? In this particular instance, it did seem that the Board did the exact opposite of what the Court said in the first appeal. And so I think the main takeaway here is that it’s really important to have an experienced advocate who can look at your Board decision if you get a bad decision from the Board and can and can appeal it to the court. Because it was clear at the second go-around that the Board was not going to grant this benefit, and we really did need the court’s intervention, including the attorneys at the VA who took another closer look at this case. It was clear that some intervention was required in order to get this Veteran the benefits that VA now agrees they wrongly withheld for 26 years.

That’s the story of this really exciting case. Thanks for watching and be sure to subscribe.