At Least As Likely As Not: VA’s Standard of Proof 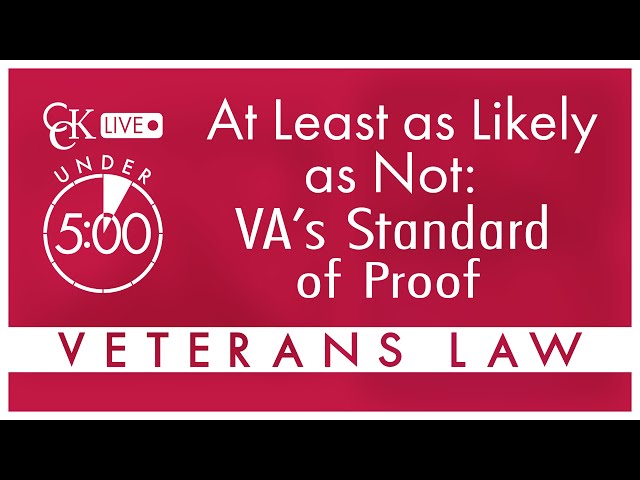 Emma Peterson: Welcome to CCK’s Live Under 5:00.  I’m Emma Peterson.  Today, we’re going to be talking about the At Least as Likely as Not Standard: VA’s Standard of Proof.

Each legal system has its own standard of proof and for VA, it’s the “at least as likely as not” standard.  The standard is part of the non-adversarial nature of the VA disability claims process, and it’s a lower burden of proof than in criminal cases or civil lawsuits.

So, everyone out there watching is probably familiar with the criminal standard beyond a reasonable doubt.  That’s the highest standard you’re going to find in legal systems.

Civil cases have a preponderance of the evidence, but VA has this “at least as likely as not” standard, and all you have to show is that there is at least a 50 percent likelihood that a benefit is due to service.  So, it is really just a 50-50 weighing of the evidence.  So, 50% for, 50% against.  The draw goes to the veteran.

This standard is really important when obtaining a medical nexus opinion.  The “at least as likely as not” standard is a key part of VA’s C&P examinations, or compensation and pension exams, and medical opinions from private doctors.  Often a veteran needs that medical nexus opinion in order to get a disability service-connected.  So, if a veteran receives an unfavorable opinion from the C&P examiner, it will likely say something along the lines of, “It is less likely than not that the veteran’s condition is due to their in-service injury or event.”  This means that service connection is not going to be warranted because there is a less than 50 percent likelihood that the veteran’s condition is linked to their time in service.

So, often veterans out there will then go and try to obtain their own private medical opinion, whether it be from an independent medical professional or their personal physician.  And that doctor – it’s very important for that doctor to use the “at least as likely as not” language.

A favorable opinion that uses the VA standard of proof can be helpful in rebutting and refuting a negative C&P examination or just as evidence on its own of medical nexus requirement for service connection.

It’s really important that if you do obtain a private medical opinion, whether from an independent medical professional or your own doctor, that you explain to them the standard because often medical professionals outside the VA world are not familiar with the “at least as likely as not” standard.  And it’s important for VA adjudicators to see that in order to award service connection.

To learn more about the VA’s standard of proof or the three elements for service connection, please be sure to check out our blog or watch our other videos, and don’t forget to subscribe to our channel.  Thanks for tuning in.