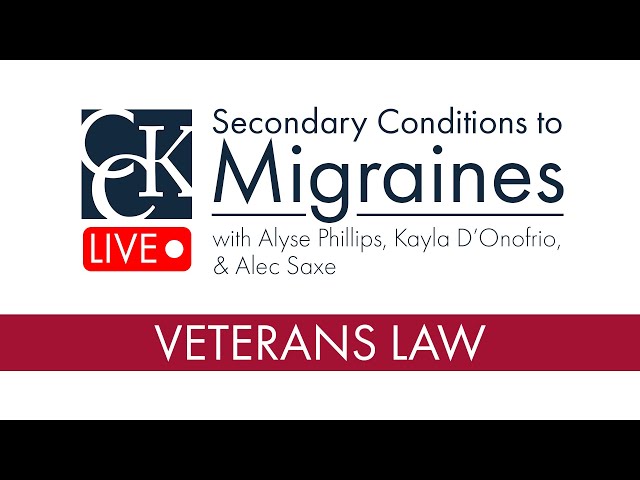 Alyse Phillips: Hello, everyone, and welcome to CCK Live. My name is Alyse Phillips and I’m here with my colleagues, Kayla D’Onofrio and Alec Saxe. Today, we are reviewing secondary conditions to migraines. Let’s start off with what are migraines.

Migraines are a form of intense headache that can last for hours and are very common among veterans. Symptoms can include pain, nausea, vomiting, sensitivity to light and sound, lightheadedness, and blurred vision.

Migraines can also create a throbbing sensation on either side of the head. Sometimes we can also see an aura, which is categorized as a visual disturbance such as flashes of light or other basically visual symptoms.

So, let’s get started. Alec would you mind talking to us about some causes and treatments for migraines.

Alec Saxe: So, there’s no singular or definitive cause of migraines, but triggers are thought to include hormonal imbalance, alcohol, stress, sensory stimulation, certain foods, and changes in environment.

Some factors which may contribute to higher rates in migraines among the veteran community include noise exposure, intense or stressful situations, and traumatic brain injury. And you can also use medication to treat migraines, as well as rest, diet modification, and stress management to avoid triggering the stimuli that may help produce migraines.

It’s rated under the 38 CFR 4.124A diagnostic code 80100 and it’s rated from 0 to 50 percent disabling—0, 10, 30,50—and it increases basically based on the prostrating, which doesn’t exactly define but it has essentially defined it as something that’s debilitating.

You see that basically the severity of that debilitating nature of headaches go up with the increase in percentage and looking at basically at 50 percent. VA looks to see whether that is capable of interfering with occupational impairment and functional impairments.

Alyse: So that covers the migraine aspect of today. Kayla, would you mind telling us a little bit about what secondary service connection is?

Alyse: Now we’re going to talk a little bit about common conditions secondary to migraines. Let’s get started with depression and anxiety.

Kayla: So, depression and anxiety are two of the more common secondary conditions that we see related to migraine headaches. Depression is kind of classified as a serious mental health condition that affects the way a person thinks, feels, and acts, and it has symptoms like persistent sadness, irritability, fatigue, lack of motivation, sometimes suicidal ideation in very severe cases.

And the reason is that migraines are a chronic condition that often cause significant pain and recurring pain, which can lead a person to feeling angry, or sad, or defeated which can then, in turn, lead to depression.

Another common mental health condition is anxiety as related to headaches. So anxiety would be defined as having intense, excessive, or persistent worry or fear about everyday situations.

Anxiety can develop in response to migraines such as when a person begins to worry about when their next migraine may occur. They may be worried about certain triggers in the environment around them, like certain sounds or smells or bright lights even can trigger migraines. So, having kind of anxiety about where you are and when a migraine could get triggered.

So that formula is used for pretty much any mental health condition that a veteran can have. The ratings are 0, 10, 30, 50, 70, and all the way up to 100 percent. Just depending on the severity of the condition and how it affects your level of social and occupational functioning.

For depression and anxiety, you won’t receive separate ratings for each of them. Even if you do have diagnoses for both, and that’s because they’re both rated under the same diagnostic criteria, you’ll just receive one rating. VA will kind of rate all of those symptoms in conjunction with one another and assign a rating appropriately.

Alyse: Similar to depression and anxiety, we also see insomnia with migraines. Insomnia is a sleep disorder that’s marked by difficulty falling asleep or staying asleep even when someone has a chance to do so. It can either be acute or chronic.

Acute insomnia typically is the result of stress or traumatic event. Whereas, chronic insomnia can be the result of stress, a traumatic event, life events, or habits that disrupt sleep which can be associated with medical conditions, use of certain medications. For example, when someone has pain from chronic migraines that conclude to difficulty sleeping, thereby causing insomnia.

Sometimes we may also see some issues with migraine medication. Sometimes those medications contain caffeine, things like that. So, medication can also be a secondary link, so long as the reason for that medication is service-connected.

People with a condition can feel with- excuse me, people with insomnia can feel dissatisfied with their sleep, they can experience negative outcomes related to their energy, which can include their mood, their health, their work performance, and their quality of life.

So, insomnia is another condition that VA will also give you benefits for. Typically we’ll see that rated under the same criteria as with anxiety and depression. That criteria, again, you’ll probably only be getting a rating for one of those since they’re all rated under the same criteria, which is section 4.130. But again, as Kayla said, those ratings can go from between a 0 and 100 percent rating, depending on how disabling the insomnia is.

Alec: Somewhat similar to insomnia, sleep apnea is a sleep disorder in which a person’s breathing is repeatedly interrupted during the course of the night.

For VA to confirm a diagnosis of sleep apnea, you’ll have to go through a sleep study, and then it’s rated anywhere from 0 to 100, again depending on severity. I believe that at 50 percent level it will get continuous use of a CPAP device. So, that’s often something you can look for, to give a gauge on your reading.

Alyse: Can you tell us a little bit about GERD?

Alec: We see the use of medications particularly NSAIDs, which are common pain medications, such as those that contain Ibuprofen, that are used to treat migraines that can lead to conditions or aggravate conditions and lead to GERD.

GERD stands for gastroesophageal reflux disease. It’s a digestive disorder characterized by the occurrence of stomach acid buildup flowing up through the esophagus from the stomach, causing discomfort and inflammation and various other symptoms.

So, we see frequent episodes of reflux can cause heartburn, difficulty swallowing, regurgitation, and chest pain. And GERD is typically rated analogously to hiatal hernia under the rating schedule at 10, 30, and 60 percent.

Alyse: Alright, the last condition that we’re going to talk about today is vertigo. Kayla, can you take this one for us?

Kayla: Vertigo is a sensation of feeling dizzy or off-balance, or sometimes that the room is spinning. In severe cases, vertigo can also lead to nausea, vomiting, or nystagmus, which would be an abnormal or jerking eye movements.

Symptoms can last anywhere from a few minutes to a few hours, or sometimes more in really severe cases. Vertigo is almost always the symptom of another underlying condition like a migraine headache, or commonly an inner ear condition that can cause kind of a shift in the equilibrium.

Alyse: Last, could you tell us a little bit about TDIU from migraines and secondary conditions.

Kayla: So, if you experience migraines with or without any of these secondary conditions, or you have other service-connected conditions that significantly impair your ability to work, a veteran may be eligible to apply for what’s called a Total Disability rating based on Individual Unemployability, or TDIU for short.

TDIU would basically allow a veteran to be compensated at the 100 percent rate without having the combined 100 percent rating, but they still have to show that their service-connected conditions prevent them from securing and following substantially gainful employment. So basically, you know, getting and holding a job for a prolonged amount of time.

We do have a lot more information about TDIU on our website, we have a number of blog posts and CCK Lives that do go into a lot more detail about TDIU, but we’re just going to kind of scratch the surface on that today.

Alyse: I was just going to mention the same thing. Actually, on TDIU as well as pretty much all of the topics and the different conditions that we cover today, we have blog posts on. We also have some YouTube videos that go into more detail on some of these conditions that you can find both at cck-law.com as well as our YouTube page.

We thank you all for joining us today. For more information, as I’ve said, you can visit our blog, but also please don’t forget to subscribe to our YouTube channel. Thank you.