What is Multiple Sclerosis?

Multiple Sclerosis (MS) is a disease of the central nervous system in which your immune system attacks the protective myelin sheath that covers nerve fibers.  This interferes with the transmission of nerve signals between the brains, spinal cord, and the rest of the body.  The onset and progression of MS can vary drastically from person to person, and often make it difficult to diagnose.  However, common signs and symptoms of this condition include the following:

Some of the less common symptoms related to MS include tremors, headaches, seizures, and speech difficulties.  Again, symptomology tends to range in severity, chronicity, and frequency amongst individuals.

The cause of MS is currently unknown; however, since it is considered as an autoimmune disease, it is believed that various factors affecting the autoimmune system can contribute to its development.  Importantly, VA rules and regulations do not recognize a causal relationship between any specific exposure and MS. 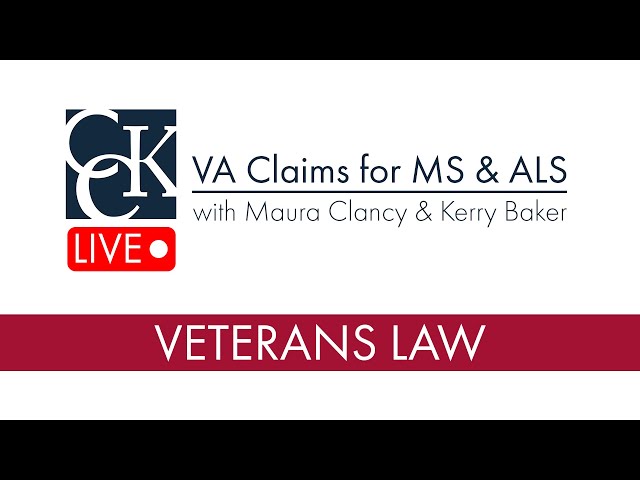 VA has established certain parameters regarding a presumption of service connection for MS.  Specifically, veterans with symptoms of MS that began during service or within seven years after service, may be eligible for service connection on a presumptive basis.  It is important to note that VA does not require veterans to have a diagnosis of MS during service, or within seven years following discharge.  Instead, veterans only need to show that symptoms related to their MS presented within that timeframe.  In order to demonstrate to VA that the symptoms of MS manifested within seven years of discharge from the military, veterans can submit treatment records, medical records, and/or lay evidence, including statements from friends and family members.  Providing as much information as possible linking the official diagnosis of MS to the previous onset of symptoms will help in establishing the presumption of service connection.

If veterans’ MS symptoms do not present within the 7-year time period, they can still apply for service-connected compensation.  However, they will need to provide a medical nexus opinion linking MS to their time in service as the presumption of service connection no longer applies.

If you are awarded service connection for MS, VA will automatically assign a minimum rating of 30 percent under 38 CFR § 4.124a, Schedule of Ratings – Neurological Conditions and Convulsive Disorders, Diagnostic Code 8018.  From there, VA will rate any residuals of the condition based on their own independent diagnostic codes.  As a result, veterans often end up with a much higher rating than the initial 30 percent minimum.  Again, veterans can submit evidence to show how the disabling effects of their residuals and how it impacts their remaining functional ability.  For example, submitting lay statements that address reportable and observable symptoms and the gradual worsening of the condition can be very helpful in establishing a higher rating.

What is Amyotrophic Lateral Sclerosis?

Amyotrophic Lateral Sclerosis (ALS) is a progressive neurodegenerative disease that destroys nerve cells and causes disability.  As the disease advances and nerve cells are destroyed, your muscles progressively weaken.  Early signs and symptoms of ALS include the following:

Over time, the disease affects control of the muscles needed to move, speak, eat, and breath as well.  ALS does not generally affect your bowel or bladder control, your senses, or your thinking ability.  However, this condition is ultimately fatal.

Like MS, there is currently no known cause of ALS.  Nevertheless, studies show that there is a significantly higher prevalence of ALS among those who served in the military.  Research on the relationship between ALS and veterans began in relation to the Gulf War.  However, those findings indicated that the rate of ALS was higher among veterans who served on active duty, regardless of when and where they served.

Following the release of the above-mentioned research report, the Secretary of VA established a presumption of service connection for ALS for any veteran who served on active duty in the military for 90 days or more.  Since there is so much uncertainty regarding why this condition is so prevalent in servicemembers, VA decided it should not limit its presumption, but rather everyone should be entitled.  However, if you did not participate in active duty, you are not entitled to the presumption of service connection for ALS.  This mainly applies to National Guard or Reserves members.

Unlike MS, VA does not impose any timeframe requirements regarding the onset of ALS.  Therefore, if a veteran who served on active duty in the military develops ALS at any point following discharge, he or she should be awarded service connection on a presumptive basis.

VA rates ALS under 38 CFR § 4.124a, Schedule of Ratings – Neurological Conditions and Convulsive Disorders, Diagnostic Code 8017.  Here, veterans are automatically awarded a 100 percent disability rating due to the severity of the condition.  However, as the disease advances and causes further functional impairment, veterans may be entitled to additional benefits.

Other Benefits for MS and ALS

Veterans with service-connected MS and ALS may be entitled to additional VA benefits such as Special Monthly Compensation (SMC): a monthly benefit for veterans who have service-connected conditions that result in severe impairment, including the loss or loss of use of extremities, blindness, the need for regular aid and attendance, and more.  There are multiple levels of compensation depending on the veteran’s condition and the limitations caused by it.  SMC rates, except that of SMC(K), are paid instead of a veteran’s disability rating, not in addition to their disability rating.  However, the amount of monthly compensation a veteran receives is higher than that which he or she would be receiving based on a schedular disability rating alone.