The Backlog of VA Claims and Appeals 2018 Update The backlog of claims and appeals at the Veterans Benefits Administration (VBA) has been an ongoing issue at VA over the course of many years. Legislation enacted in August 2017, the Veterans Appeals Improvement and Modernization Act, is meant to reduce the department’s backlog and therefore improve wait times for veterans’ disability compensation decisions.

But just how large is VBA’s backlog of claims and appeals, and how did it get this way? Will Appeals Reform remedy the situation? We will take a look at how this backlog came to be, and what VA is doing to reduce it. 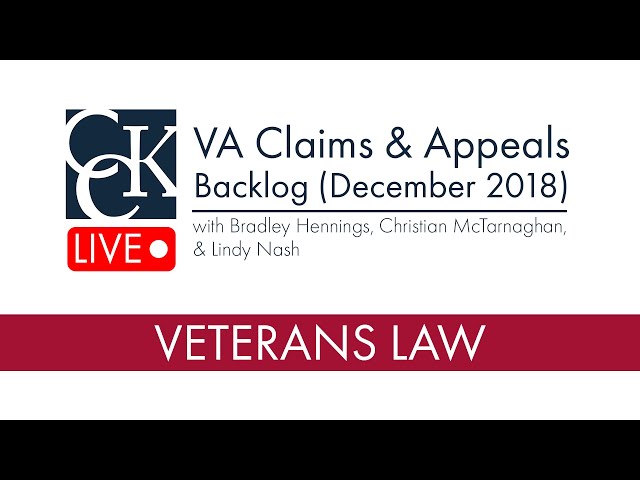 Structure of the Department of Veterans Affairs

To understand how VA’s backlog came to be and where it fits into the department as a whole, it is important to recognize the structure of VA and the administrations within it. The Department of Veterans Affairs is made up of three separate administrations:

It is important to note the distinction between the VBA and VHA, as the two operate separately.

Two separate backlogs exist at the Veterans Benefits Administration: one comprised of claims and one comprised of appeals. Claims refer to initial filings— for example, a claim for service connection. Once a claim moves through the process, the veteran will receive a rating decision and have the opportunity to file a Notice of Disagreement if the outcome is unfavorable. Once a Notice of Disagreement is filed, the claim becomes an appeal.

A “backlogged” claim is any claim that has not been adjudicated by VBA within 125 days. The claims backlog reached its peak in March of 2013 with 611,000 claims. So, what contributed to this massive backlog? Although we do not know for sure, our team was able to identify some potential contributing factors: Current State of the Claims Backlog

As of September 2018, the number of backlogged claims in VBA’s system was about 84,000 and the number of pending claims was just under 350,000. The significant reduction of the claims backlog may be attributed to VBA’s “Transformation Plan.” This plan encouraged Regional Offices to process more claims by instituting mandatory overtime and performance goals.

The appeals backlog is a separate category from the claims backlog. VA’s appeals backlog is made up of appeals at both the VBA and Board of Veterans’ Appeals levels.  Currently, there are about 470,000 pending appeals with approximately 120,000 at the Board.  As stated before, veterans wait an average of three years for a standard appeal to be adjudicated and five years when appealing to the Board of Veterans’ Appeals.

Various factors have contributed to the increasing appeals backlog at VA, such as: The Department of Veterans Affairs has already implemented some changes to address its appeals backlog, and will soon enact more.