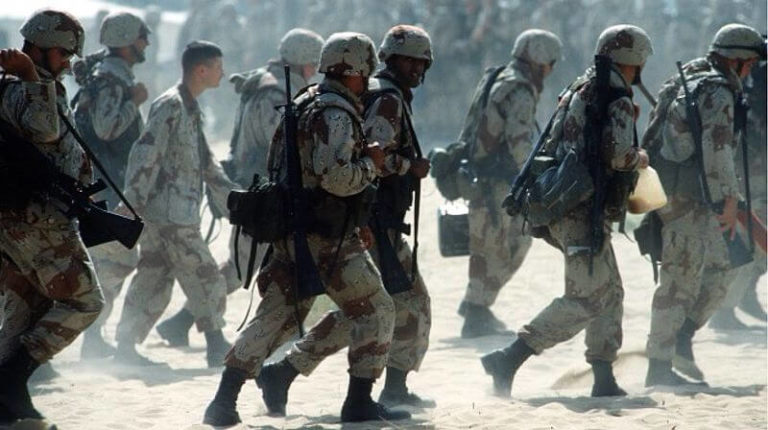 Between August 1990 and July 1991, nearly 700,000 United States troops were deployed to the Persian Gulf to serve in Operations Desert Shield and Desert Storm.  Shortly after returning, many Gulf War veterans began reporting a variety of symptoms in multiple body systems that medical professionals could not diagnose, and eventually termed “Gulf War Illness.”  It is estimated that Gulf War Illness affects about one-third of Gulf War veterans.  The most commonly reported health concerns include fatigue, pain, cognitive and mood problems, skin rash, gastrointestinal and respiratory conditions.  The pathophysiology and etiology of Gulf War Illness remains undetermined, but research clearly suggests that toxic exposures contribute to it.  Specifically, exposure to low-level sarin chemical warfare agent, pesticides, and pyridostigmine bromide (PB) can result in both immediate and delayed health effects.

Gulf War veterans have showed increased prevalence of chronic multisymptom illnesses, such as fibromyalgia, chronic fatigue syndrome, and irritable bowel syndrome.  Research shows that Gulf War veterans are also more likely to develop chronic neurological disorders, including amyotrophic lateral sclerosis (ALS), brain cancer, repeated seizures, and chronic migraine headaches.  VA created a presumption for Gulf War veterans under 38 CFR § 3.317 in order to make it easier for veterans to obtain service connection for conditions they develop due to their service in the Gulf War.  The presumption holds that if veterans served in the Southwest Asia theater of military operations between August 2, 1990 and December 31, 2021, and they experience certain signs or symptoms, VA will presume that their Gulf War service caused their condition.

Motivation Behind the Study

How the Study Was Conducted

This study involved two groups of participants: the population-based Ft. Devens Cohort (FDC) of Gulf War Veterans and the population-based 2013-2014 National Health and Nutrition Examination Survey (NHANES) cohort.  Importantly, NHANES is a program of studies created by the Centers for Disease Control and Prevention to assess the health and nutritional status of adults in the United States.  There were 448 participants in the FDC group of Gulf War veterans, including 47 women, while 2,959 participants were obtained from the NHANES survey.  The NHANES participants were restricted to the age range of the FDC respondents and veterans were excluded from that sample.

The FDC veterans and NHANES participants were asked to self-report if a doctor had ever diagnosed them with any of the following nine chronic medical conditions:

The FDC veterans were also asked to self-report if they were ever exposed to chemical or biological warfare agents, such as PB anti-nerve agent pills.  After this information was collected, comparisons were made between the two groups, as well as between men and women to assess for gender- and age-specific associations.  For age, the researchers compared three different groupings: 40s, 50s, and 60+ .

The results of this study support the researchers’ hypotheses, demonstrating that Gulf War veterans are at higher risk of chronic conditions than the general population and these risks are associated with self-reported exposures.  Specifically, the following findings were made:

While this study was the first to compare Gulf War veterans’ health status to that of the general population, there were several limitations involved.  Specifically, the low response rate of the FDC survey (35 percent) could have introduced some response bias in which sicker veterans responded to the survey, thereby influencing the results.  To resolve this potential issue and ensure the most accurate results, researchers will need to replicate the study’s findings in a larger population size.

Ultimately, the study found that Gulf War veterans in the FDC group had significantly increased odds for reporting chronic conditions, including: high blood pressure, high cholesterol, heart attack, diabetes, stroke, arthritis, and chronic bronchitis compared with the NHANES general population.  These results indicate that Gulf War veterans are at higher risk of chronic conditions than the general population and these risks are associated with self-reported toxic exposures.