Prior to January 5, 2021, the VA Debt Management Center (DMC) reported an average of 5,000 delinquent veteran accounts monthly.  DMC regularly receives complaints from veterans whose accounts have been reported to Consumer Reporting Agencies.  Common complaints from veterans include loss of security clearance, inability to obtain approval for home loans or home refinancing, and difficulty securing rental housing.

In February 2022, VA announced that it would make changes to its debt collection policies.  The new regulations acknowledge that debts stemming from a benefit administered by VA are different than consumer debts and may be due to a variety of factors, such as an overpayment, that are not the veteran’s fault.

The changes should help veterans to better understand VA’s debt collection policies, while also decreasing the number of veterans negatively impacted by debt reporting.  Continue reading to learn more about these changes.

How Do Veterans Accrue Debts With VA?

An overpayment is a debt VA creates when it determines a veteran has been paid ore than they were entitled in benefits.  Essentially, the veteran receives more than their designated disability benefit or other VA benefit amount.

For example, an overpayment could be triggered when a veteran’s dependent status changes, such as after a divorce, and the veteran does not update VA with the necessary information.  In this case, the veteran would still be receiving money for an ineligible dependent, leading to overpayment.

When VA creates an overpayment, they will issue an overpayment notice to the veteran with the total overpayment amount and request that it be repaid.  The written notice must include: 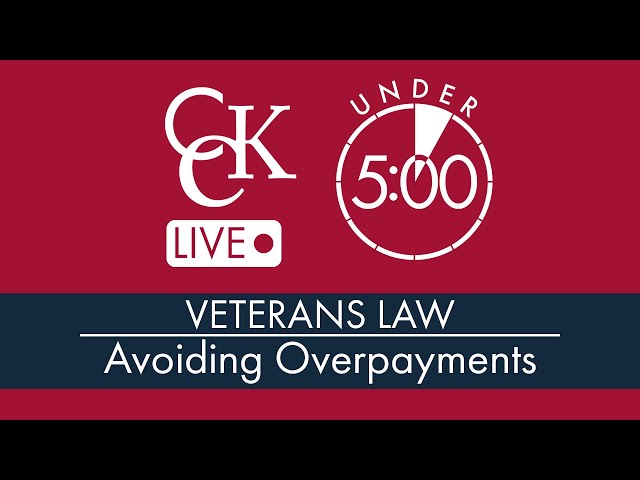 Some veterans who receive retired service pay and VA disability compensation at the same time are subject to the government’s “double-dipping” laws, stating that benefits cannot be duplicated.  To comply with this law, these veterans are required to offset part of their service retired pay.  To do this, the amount the veteran receives in VA compensation is subtracted from the amount they receive in retired pay. This subtraction is referred to as the VA waiver.

However, eligible military retirees may be able to recover some or all of the retired pay waived for VA disability pay through Concurrent Retirement and Disability Pay (CRDP) or Combat-Related Special Compensation (CRSC).

What Are the Changes to VA’s Debt Collection Policies?

Under the newly implemented VA debt collection policies, VA can only report veterans’ debts to consumer reporting agencies if:

When Will the New Policies be Implemented?

VA announced that these new debt collection regulations will be effective March 4, 2022.  This means that if the veteran’s debt does not meet the above circumstances, their debt should not be reported to consumer reporting agencies.

How Will These Policies Help Veterans with Debts?

In a recent press release, VA Secretary Denis McDonough acknowledged how reporting debt to consumer reporting agencies can “impact credit worthiness” and “cause financial distress for veterans,” even though many debts are caused by overpayment of benefit funds and are accrued “through no fault of the veteran.”

These new changes to VA’s debt collection policy should help prevent many veterans from having their debts reported to collection agencies.  For example, under the new policy veterans should not have their credit badly impacted due to small debts under $25.

According to McDonough, the new changes “will result in a 99% reduction in unfavorable debt reported to consumer reporting agencies.”  VA’s press release cites that in previous years approximately 530,000 VA debts were reported and roughly 60,000 delinquent debts were referred to consumer reporting agencies annually.  With the new changes, these numbers will hopefully decrease.

Are You a Veteran Struggling to Appeal a VA Decision?

If you are a veteran who needs help appealing a decision VA has made, such as if you have an overpayment and VA denies your dispute, the veteran’s advocates at Chisholm Chisholm & Kilpatrick may be able to help you.  Contact our office for a free case evaluation.