Can You Receive VA Disability and Military Retirement Pay? What is Concurrent Retirement and Disability Pay (CRDP)?

According to VA, concurrent retirement and disability pay (CRDP) is a “phase in” of benefits that gradually restores a veteran’s service pay by eliminating the “VA Waiver” (see below).  Essentially, veterans who receive pay and VA disability compensation at the same time are typically subject to the government’s “double-dipping” laws.  The law stipulates that benefits cannot be duplicated.  To comply with this law, veterans who receive both service retired pay and VA disability compensation simultaneously are required to waive (i.e., give up) part of their service retired pay.  The amount the veteran receives in VA disability compensation is subtracted from the amount they receive in retired pay to avoid “double-dipping.”  This subtraction is referred to as the VA Waiver.

With CRDP, veterans will receive a monthly check from the Defense Finance and Accounting Service (DFAS), the administrator of military retired pay, that includes their full retired pay (i.e., restored retired pay and VA disability compensation).

How to Apply for Concurrent Retirement and Disability Pay (CRDP)

Importantly, there is no application process for CRDP.  If a veteran meets the eligibility requirements, DFAS should automatically eliminate the VA waiver, thereby restoring full retired pay.

*Note: In most cases the retirement age for reservists is 60, but certain reserve retirees may be eligible before they turn 60.  If a veteran is a member of the Ready Reserve, their retirement age can be reduced below age 60 by three months for each 90 days of active service they have performed during a fiscal year.

*Note: No CRDP is payable for any month prior to January 2004.  Prior to 2004, existing laws and regulations prohibited military retirees with service-connected disabilities from receiving both payments.

In January 2019, the Congressional Research Service released a report titled, “Concurrent Receipt of Military Retirement and VA Disability,” which looked at CRDP recipients and costs.  According to the report, as of September 2017, there were 577,399 CRDP recipients at an annual cost of $11.4 billion.  The Congressional Budget Office (CBO) has previously estimated that eliminating CRDP would save $139 billion between 2018 and 2026.  CBO also estimates that extending the CRDP program to those with a VA disability rating of 40 percent or less would cost $30 billion over a 10-year period.

Total disability based on individual unemployability (TDIU) is a VA disability benefit for veterans whose service-connected disabilities impact their ability to obtain and maintain substantially gainful employment.  TDIU benefits provide veterans with the same monthly compensation amount as that of the 100 percent schedular disability rating, even if their combined disability rating does not equal 100 percent.  Veterans are eligible for full concurrent receipt of TDIU benefits and retired pay, if they are a military retiree who meets all of the above-mentioned eligibility requirements, as well as both of the following:

This regulation became effective October 1, 2008 and is retroactive to January 1, 2005. 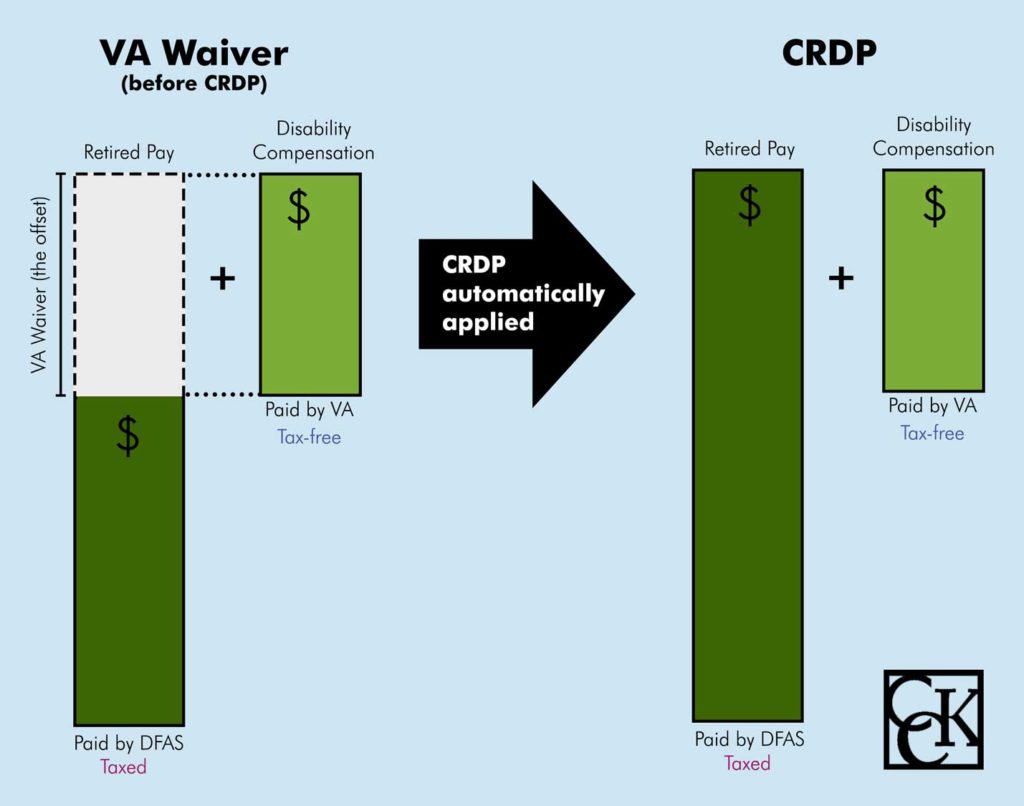 CRDP is different from an alternative form of retired pay, known as combat-related special compensation (CRSC), in a number of ways.  Importantly, CRSC is a version of concurrent receipt for veterans whose disabilities are combat-related.  Unlike CRDP, CRSC does not eliminate the VA waiver.  The VA waiver (i.e., an amount equal to your total VA compensation) will continue to be subtracted from veterans’ service retired pay.  However, CRSC reimburses all or some of veterans’ VA waiver in a separate check from their branch of service.

Will CRSC Reimburse the Full Amount of VA Waiver?

It is important to note that CRSC may not reimburse the full amount of the VA waiver if only some of the veteran’s service-connected conditions are combat-related.  For example, the veteran’s branch of service may determine that only 40 percent out of their 60 percent combined disability rating is considered combat-related, in which case the branch would reimburse only the amount of VA compensation you would receive for a 40 percent disability rating. 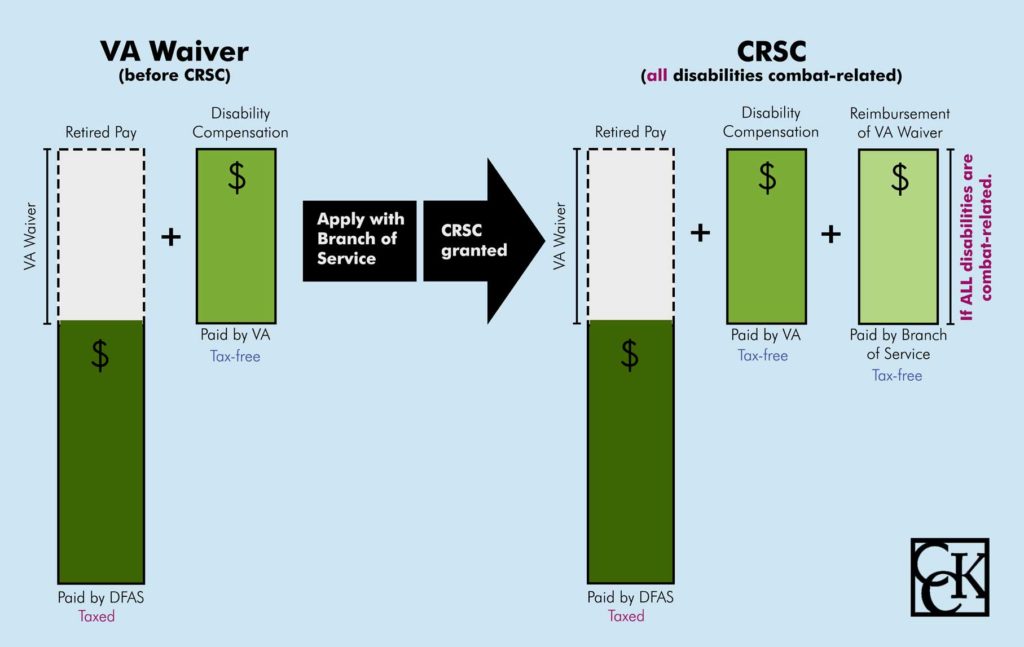 Applying for CRSC vs. CRDP

As mentioned above, veterans do not have to apply for CRDP; however, this is not the case for CRSC.  For CRSC, veterans must apply to their branch of service.  The branch of service will determine the proportion of the veteran’s VA disability rating that is combat-related and subsequently award a CRSC rating, which will in turn determine the amount of additional monthly compensation the veteran receives.  Eligibility criteria differ slightly for each branch of service, but for all branches of service, veterans must be receiving both service retired pay and VA disability compensation.  Unlike CRDP, there is no minimum rating requirement for CRSC to be applied.  Nonetheless, veterans with 0 percent (i.e., non-compensable) ratings are not eligible because they are not receiving VA compensation and thus have no retired pay offset.