To understand how migraines and anxiety disorders are related and rated, it is important to first understand the two conditions.

What are Migraine Headaches?

Migraine headaches are a type of headache characterized by intense pain that can be accompanied by nausea, vomiting, sensitivity to light and sound, lightheadedness, and blurred vision.  Migraines can be very debilitating, lasting anywhere from hours to days depending on the person.  It is unclear what causes migraines, but triggers can include hormonal imbalance, alcohol, stress, sensory stimulation, certain foods, and changes in the environment.  Treatments for migraines include rest, avoiding triggering stimuli, diet modification, medications, and stress management.

Migraines are fairly common in the general population; however, they may be even more common among veterans.  Research shows that approximately 36 percent of the service members who had served in Operation Iraqi Freedom had reported migraines compared to 12 percent in the U.S. civilian population. 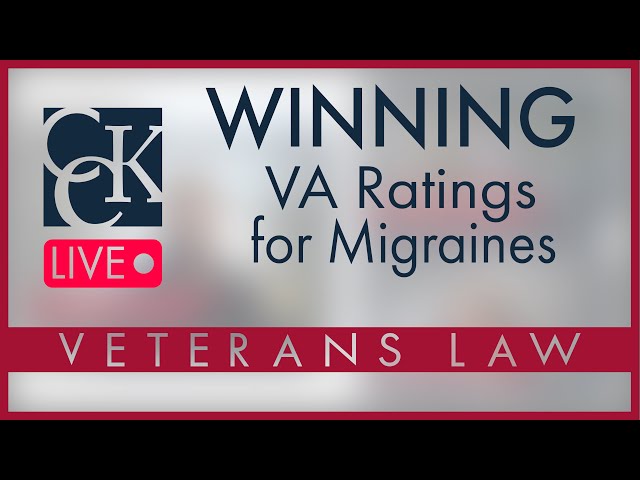 Anxiety is defined as intense, excessive, and persistent worry and fear about everyday situations.  It is estimated that one-third of adults in the U.S. suffer from anxiety disorders.  The most common symptoms of anxiety disorders include the following:

Service Connection for Migraines and Anxiety

In order to establish direct service connection for migraines or an anxiety disorder, veterans must establish the following:

Examples of in-service occurrences might include if a veteran specifically treats for their anxiety during their time in service, or if they check off that they are experiencing anxiety-like symptoms at the time of their discharge examination.  It is important to note that the in-service occurrence element of service connection does not require that the veteran has an official diagnosis of an anxiety or migraine disorder during service.  Instead, a veteran can be diagnosed with an anxiety disorder following service and still receive benefits, as long as they can establish that their current condition is connected to service.  A medical opinion is almost always required to establish this nexus.

Veterans suffering from anxiety disorders due to migraines may be eligible for VA disability benefits on a secondary basis as described above.  According to research, about 20 percent of people with episodic migraines (i.e., headaches on 14 or fewer days per month) also have anxiety.  Furthermore, between 30 and 50 percent of people with chronic migraines have anxiety.  Veterans who develop migraines as a result of their anxiety disorder should consider applying for secondary service connection.

It is still unclear within the medical community whether migraines cause anxiety or visa-versa; however, it is evident that there is a causal connection between the two conditions.  As such, veterans can use this information to bolster their claims for secondary service connection.