Before you can understand CRDP and CRSC, you have to understand what happens when a veteran is receiving service retired pay and VA disability compensation at the same time. Veterans who receive retired pay and VA  compensation at the same time are typically subject to the government’s “double-dipping” laws. The law stipulates that benefits cannot be duplicated. 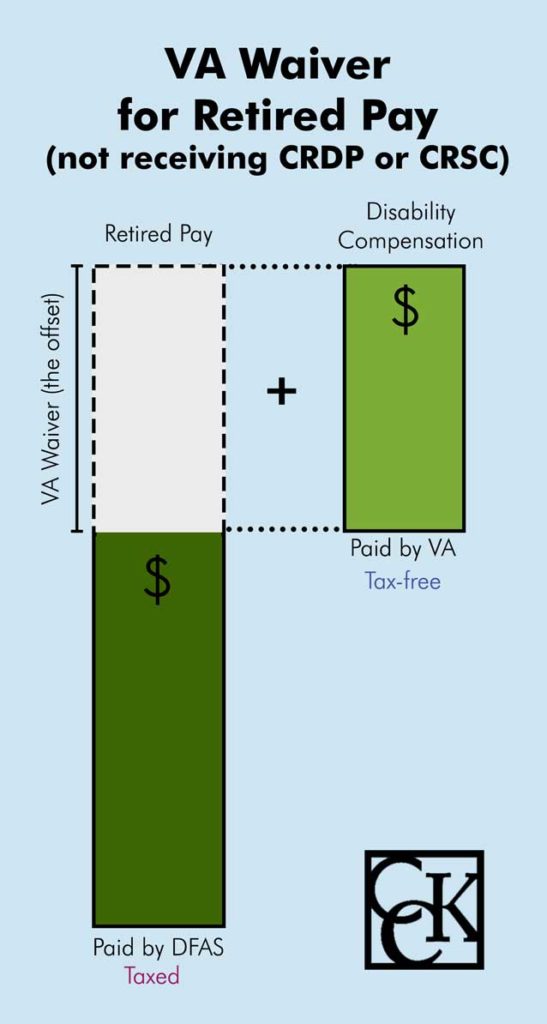 For a long time, this was the end of the story for retired veterans who were also disabled. But now, certain veterans qualify for what is called “concurrent receipt.” Concurrent receipt is the restoration of service retired pay that has been withheld by the VA waiver. There are two forms of concurrent receipt: Concurrent Retired and Disability Pay (CRDP) and Combat-Related Special Compensation (CRSC).

The two benefits serve the same function – restoring all or part of the VA waiver – but each has different eligibility requirements, application processes, and funding sources. And for veterans who are eligible for both benefits, it can be hard to know which concurrent receipt benefit to choose.

CRDP restores your service pay simply by eliminating the VA waiver. So, unlike CRSC, you will not receive a separate check for CRDP. Instead, the monthly check you receive from the Defense Finance and Accounting Service (DFAS), the administrator of military retired pay, will be increased from the docked amount (see “VA Waiver” figure on the left) to your full retired pay (see “CRDP” figure on the right).

Because it is a direct restoration of the VA Waiver, CRDP essentially counts as service retired pay.

There is no application process for CRDP. If you meet the eligibility requirements, DFAS will automatically eliminate the VA waiver, restoring your retired pay. NOTE: For those who had a service disability rating upon retirement

Unlike CRSC, there is no combat-related factor for CRDP eligibility. To be eligible for CRDP, veterans must

Unfortunately, medical retirees (Chapter 61 retirees) with less than 20 years of service are not eligible for CRDP. And again, if you meet the above requirements, CRDP will be applied automatically and your VA waiver will be eliminated.

CRSC is a version of concurrent receipt for veterans whose disabilities are combat-related. Unlike CRDP, CRSC does not eliminate the VA waiver. The VA waiver (an amount equal to your total VA compensation) will continue to be subtracted from your service retired pay. But CRSC reimburses all or some of your VA waiver in a separate check from your branch of service.

Thus, veterans receiving CRSC will get three separate checks each month. From DFAS, a check for service retired pay with the full VA waiver amount subtracted; from VA, a check for your full VA compensation; and from your branch of service, a check for your CRSC reimbursement.

Because it is not considered retired pay, the CRSC payment is tax-free.

NOTE: For those who have some service-connected disabilities that are combat-related and some that are not

It is important to note that CRSC may not reimburse the full amount of the VA waiver if only some of the veteran’s service-connected disabilities are combat-related. For example, the veteran’s branch of service may determine that only 40 percent out of your 60-percent overall rating is considered combat-related (because of the way your disabilities were incurred), in which case they would reimburse only the amount of VA compensation you would receive for a 40-percent rating. NOTE: For those who had a service disability rating upon retirement

Unlike CRDP, CRSC is not automatically applied to eligible veterans. For CRSC, you must apply to your branch of service. You branch of service determines what proportion of your VA disability rating is combat-related and award you a CRSC rating. That CRSC rating determines the amount of additional money you will receive each month.

Eligibility criteria differ slightly for each branch of service, mostly in how they interpret the term “combat-related.” But for all branches of service, veterans must be receiving both service retired pay and VA disability compensation. Unlike CRDP, there is no minimum rating requirement for CRSC to kick in. Veterans with 0% (non-compensable) ratings are not eligible because they are not receiving VA compensation and thus have no retired pay offset.

Below you will find links to the website for each branch of service that explains their eligibility requirements, how to apply, and what documentation you need to include with your application. Each site also has downloadable CRSC application forms and the appropriate mailing address for that branch of service.

You cannot receive CRDP and CRSC at the same time. If you are eligible for both CRDP and CRSC, there are two ways you can go about selecting one or the other:

Automatic selection of the greater amount. If you are already receiving CRDP and then become eligible for CRSC (after applying with your branch of service), DFAS will assess which of the two programs will pay you the greater amount. They will automatically pay you this greater amount. Many veterans will choose to stick with the benefit that pays the greater amount, and this requires no additional action. But there are a few reasons you may want to select a different program (see “Factors to consider” below).

Voluntary switch during open season. If you prefer to switch programs after DFAS’s initial assessment, you will have the opportunity to do so once a year. Every December, DFAS will mail you an open-season election letter. The letter contains information about the different amounts you would receive under CRDP or CRSC, and the potential impact of each on your taxes. You will be able to select one benefit or the other on the form included in the letter. If you would like to continue receiving the benefit you currently receive, there is no need to fill out the form.

Open season may be particularly important if your VA ratings or CRCS rating (i.e. what percentage of your disabilities are considered combat-related) changes mid-year. A change in ratings (increase or decrease) could make one of the benefits more valuable than the other.

When given the opportunity to choose CRDP or CRSC, it can be challenging to make an informed decision. Many veterans will simply want to accept the benefit that will give them the greater amount of money, but there are a few other factors that should be considered, especially if your CRDP and CRSC amounts are close to equal.

Below is a summary of the differences between CRDP and CRSC that might influence your decision.

* Otherwise, your branch of service will determine what percentage of your disabilities are combat-related and you will be reimbursed for only that percentage.

So, for medical retirees who have less than 20 years of active service, but 20 or more years of combined drilling and active service, eligibility can feel complicated. Unfortunately, the medical retirees in this “gray area” are not yet eligible for CRDP, but will become eligible when they turn 60. This is because, under medical retirement, the veteran is considered to have less than 20 years of service, so DFAS and VA make the same assumption for CRDP purposes. At 60, the veteran can include the total time for their Guard and Reserve retirement (active years and drilling years), and would be considered to have 20 or more years of service, thus meeting the eligibility criteria for CRDP.

Disclaimer: The following section of this post does not, and is not intended to, provide tax or accounting advice. Readers should consult their tax advisors concerning the application of tax laws to their particular situations.

CRDP is taxed. CRSC is not. These simple facts can lead to some pretty complicated tax issues, especially when veterans are awarded CRSC or their VA ratings change mid-year. When VA or DFAS approve these changes, the changes are often implemented retroactively. So, as a simple example, a veteran whose overall VA rating was increased from 50% to 70% might receive a retroactive payment of all the benefits he or she would have received, back to an effective date that the VA determines.