Representative Phil Roe, Chair of the House Committee on Veterans’ Affairs (HVAC), introduced new legislation on May 4, 2018, by nature of a substitute to a previously similar bill, to expand VA disability and health benefits to Navy Veterans who served in the territorial seas of the Republic of Vietnam during the Vietnam War, known as Blue Water veterans.  The HVAC passed the Bill on May 7, 2018, with full bipartisan support and has 329 cosponsors.  The Bill now proceeds to the full House of Representatives.

What Does “Blue Water” Mean? 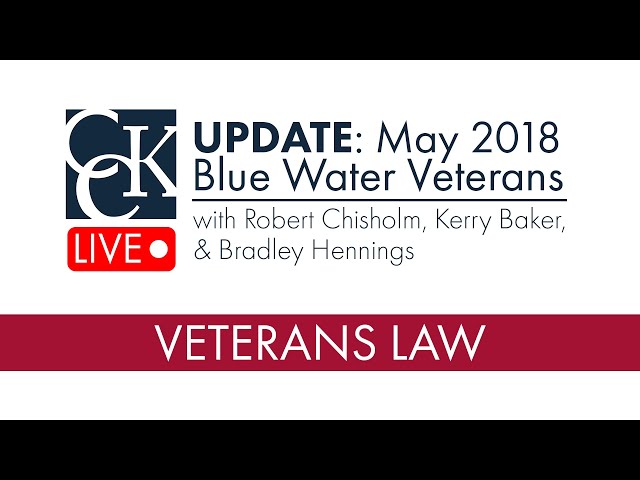 Find out what diseases are covered by the Agent Orange presumption regulation here.

What Does the Veterans Court Say About Blue Water Veterans? A Look at Haas v. Nicholson

In August 2006, the Court of Appeals for Veterans Claims (CAVC) issued a decision in the case Haas v. Nicholson, stating that the VA regulation providing for presumptive service connection for herbicide exposure must include veterans with “service in the waters near the shore of Vietnam, without regard to actual visitation or duty on land in the Republic of Vietnam […].”

The veteran, Jonathan Haas, claimed entitlement to service connection for diabetes mellitus with peripheral neuropathy and retinopathy due to herbicide exposure from his service during the Vietnam War. He was stationed on board the U.S.S. Mount Katmai, an ammunitions ship stationed off the coast of the Republic of Vietnam. His ship was not allowed to enter the ports of Vietnam due to the highly explosive materials onboard. Mr. Haas testified that he witnessed planes spraying chemicals over the forests in Vietnam, and that the wind would carry those chemicals out to sea and “engulf ships [his] ship in particular.” He was awarded a Vietnam Service Medal.

The Regional Office and Board of Veteran’s Appeals (BVA) denied his claims for presumptive service connection on the basis that he was not stationed in-country. His service aboard a ship in the waters offshore made him ineligible for benefits under VA’s regulation of presumption.

The Heart of the Issue and the Court’s Haas Ruling

The Agent Orange Act of 1991 codified a process and procedure for adding conditions to the presumptive conditions list and outlines the definition for those eligible for the presumption. The Act states, “a veteran who, during active military, naval, or air service, served in the Republic of Vietnam during the Vietnam era and has a disease referred to” in the regulation, will be afforded presumptive service connection.

The issue that the CAVC addressed was what service in the “Republic of Vietnam” meant in the Agent Orange Act of 1991. Haas argued that Congress used the phrase “Republic of Vietnam” as it related to international law, in which the territory of a country includes the waters 12 nautical miles seaward of the demarcation line. This interpretation would have included Blue Water veterans.

The CAVC agreed that the language in the Agent Orange Act was ambiguous and did not refer to only the landmass of the country of Vietnam, but also the waters off the coast of Vietnam. The ruling stated that the presumptive rule did not “preclude application of the presumption to a member of the Armed Forces who served aboard a ship in close proximity to the land mass of the Republic of Vietnam.” The Court’s ruling was in favor of Blue Water Navy veterans.

The ruling in favor of VA continued VA’s interpretation of their regulation of presumption for herbicide exposure to exclude Blue Water veterans.

Are Blue Water Veterans Going to Get Benefits?

The bill introduced to the United States Congress concerns veterans “who, during active military, naval, or air service, served in the territorial seas of the Republic of Vietnam during the period beginning on January 9, 1962, and ending on May 7, 1975.” This language is meant to explicitly include Blue Water veterans, ending VA’s long-held practice of excluding these veterans from presumptive benefits for Agent Orange exposure during service.

The bill would alter the language of VA’s current regulation of presumption for herbicide exposure to include Blue Water veterans, and allow them to obtain presumptive service connection for conditions associated with Agent Orange exposure.