VA Secondary Conditions to Depression and How They’re Rated 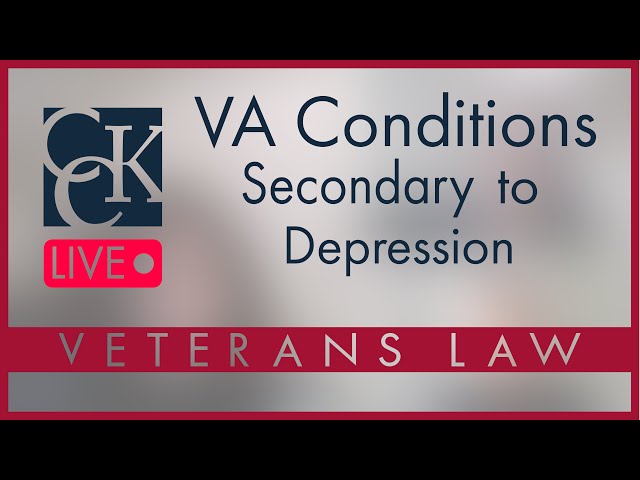 Michael Lostritto: Hello everyone and welcome to another edition of CCK Live.  My name is Michael Lostritto, and today I’m joined by Alex Gamache, an accredited VA claims agent, and also Kaitlyn Degnan, an attorney at the firm.

In this video, we’re going to review VA secondary conditions to depression.  So, to start off very basically, what is depression?

Depression is defined as a serious mental health condition that affects the way a person thinks and feels and acts.  Symptoms of depression tend to vary among different individuals, but generally speaking, common symptoms tend to include things like persistent feelings of sadness, worthlessness, hopelessness, lack of motivation, or interest in activities that usually derive pleasure.  It can include difficulty sleeping and concentrating, a change in appetite resulting in weight loss or weight gain, irritability, fatigue.  So, any of those symptoms, all or just a few of them, can all result from depression.

So, depression is a mental health condition, like I said.  And as such, VA will write this condition based on the severity of the condition and assign a rating that can go anywhere from 0% to 10%, 30%, 50%, 70%, or a maximum rating of 100% for the condition.  To do this, VA uses its general rating formula for mental disorders.  These ratings are based on the level of social and occupational impairment that a veteran experiences and the severity of the symptoms VA uses characterize that impairment.

So, with that, Kaitlyn, I’ll turn to you.  Can you tell us a little bit about generally what is a secondary service-connected condition?  How do you get it?

Michael: And that’s exactly right.  And so, there are a number of common or typical conditions that can be claimed secondarily to a service-connected depressive disorder.  We’re going to go through some of those.  This isn’t an exhaustive list, but these are some of the more common conditions that we see claimed as secondary to depression.  So, Kaitlyn, maybe you can describe a little bit about that.

Kaitlyn: Sure.  So, the first condition that we’re going to talk about are migraines.  Migraines are a form of headaches that can last for many hours and often interfere with a person’s life.  And these intense headaches can bring pain, nausea, vomiting, sensitivity to light and sound, lightheadedness, and blurred vision, among other symptoms.  There’s no definitive cause of migraines, but triggers can include hormonal imbalances, alcohol use, stress, sensory stimulation, certain foods, and then changes in the environment.

Medication can be used to treat migraines, and so can rest, diet modification, and stress management.  Migraines are rated under 38 CFR 4.124a, diagnostic code 8100, from 0 to 50 percent based on their severity and frequency.

Michael: Yeah, and you know, what’s interesting too, is that I do see in my practice migraines claimed secondarily to depressive disorder, quite often.  The reverse is also true.  We’re not talking that about that specifically today, but as is the case of migraines and many of the other conditions that were going to be talking about, oftentimes, you could develop depression or depressive disorder as a result of say migraines or other conditions.

Again, today we’re speaking solely about conditions resulting from depression or depressive disorder, but I think it’s just important to note that the reverse or inverse rather is applicable in many of these situations as well.

So, Alex turning to you.  Another two conditions that I think we commonly see secondary to depression include restless leg syndrome and erectile dysfunction.  So, perhaps you can walk us through those two conditions.

Michael: Yeah, exactly Alex, and thank you.  Another condition that we commonly see secondary to depression are gastrointestinal conditions, or GI conditions.  GI diseases are those that involve the organs of the digestive tract and accessory organs, and they aid in digestion.  Common examples include things like colitis or GERD or IBS, acid reflux.  So, there are a multitude of different conditions that can be GI conditions.

What’s interesting is that certain medications, particularly antidepressants and antipsychotics, are known causes of GI issues.  And so, perhaps a veteran is service-connected for depression, they are prescribed antidepressants.  The use of those antidepressants particularly over an extended period of time, could lead to or result in a GI issue.  And so that is something, those are conditions that we often see claimed and linked secondarily to depression.

VA rates gastrointestinal diseases under 38 CFR section 4.114 of the schedule of ratings for digestive system.  There are multiple diagnostic codes for the various GI conditions that fall under the rating.  But generally speaking, the ratings can range anywhere from 0% non-compensable rating all the way to a maximum 100% rating.

Seizures is another condition.  Seizures and epilepsy, I should say, are two other conditions, affecting the central nervous system.  So, they’re neurological disorders or conditions which the brain’s activity becomes abnormal and it causes seizures or periods of unusual behaviors, sensations, and sometimes loss of awareness.  What’s interesting here is that oftentimes benzodiazepines, which are prescribed to treat these conditions, often can have severe side effects, and some of those severe side effects can include seizures.

So, again, a veteran is diagnosed with depression or depressive disorder.  They are prescribed benzodiazepines to treat that mental condition, and unfortunately, as a side effect of that, they develop some of these neurological conditions.  And so, provided of course that the veteran can show that secondary epilepsy or seizures or neurological condition was caused by or aggravated by those medications, then secondary service connection can be in order for those conditions.

VA assigns disability ratings for seizures based on the number of seizures that took place in the past year.  So, seizures are rated according to 38 CFR section 4.124 subdivision a, and the ratings can really range anywhere from a 10% to a 20%, 40, 60, 80, all way up to a 100% rating.

Kaitlyn, can you walk us through and talk a little bit about liver conditions and how those might be related in some way to a veteran’s depressive order?

Kaitlyn: Sure.  So, some veterans might turn to the use of alcohol as a coping mechanism for their service-connected depression.  And VA defines alcoholism or alcohol abuse as the use of alcoholic beverages over time or such excessive use at any one time that is sufficient to cause disability or death of the user.

Consuming an alcoholic beverage in and of itself does not constitute alcohol abuse.  Rather the defining factors are the length of time that the behavior continues and whether the behavior is done in excess.  If a veteran experiences alcoholism as a result of a service-connected condition, they can then be service-connected on a secondary basis for conditions that arise from that alcohol abuse.

Michael: Alex, what if a veteran is seeking unemployability benefits or TDIU benefits?

How do secondary conditions to depression factor into or help a veteran who might be seeking TDIU benefits?  Can you talk a little bit about that?

So, TDIU, or a total disability based on individual unemployability, is a monthly benefit that compensates veterans at the 100 percent level if they are prevented from working because of their conditions.  For more information on TDIU, you can check out one of our YouTube videos that are linked below.

Michael: Yeah.  That’s terrific.  And I think the two points that you mentioned, number one, getting additional service-connected conditions helps boost potentially the veteran’s overall combined rating to reach the schedular requirements for TDIU.  And then, secondly, I know you talked a little bit about how adding additional service-connected conditions, secondarily to depression, then allows VA to consider the limitations that result from those secondary conditions as part of its underlying analysis when it examines whether a veteran has the functional limitations that would enable them to be warranted for TDIU.

So, thank you both for the great discussion.  For more in-depth information on the conditions and topics discussed in the video, they can be found on our blog or in the videos or on our YouTube channel.

So, as always, thanks for joining us, and be sure to subscribe to our channel and follow us on social media.