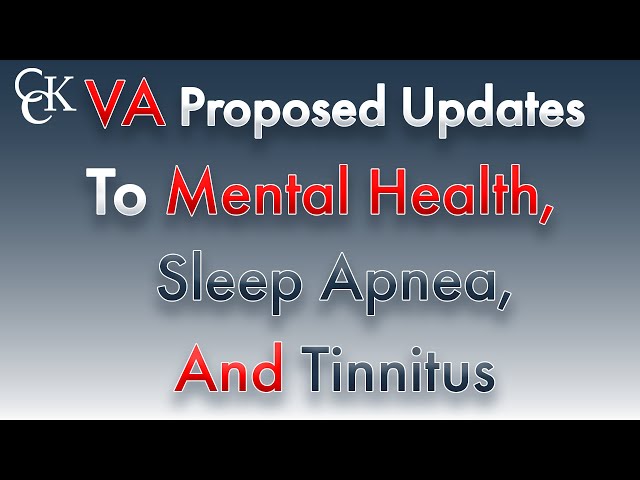 Nicholas Briggs: Welcome to CCK Live. My name is Nicholas Briggs and I’m an accredited VA practitioner here at Chisholm Chisholm & Kilpatrick. I’m joined today by attorneys Christine Clemens and Christian McTarnaghan. And in this video, we’re going to be discussing VA’s recent proposed changes to the rating systems for sleep apnea, mental health, and tinnitus.

First, a brief overview of those proposed changes. On February 15th, VA announced some proposed changes to the VA Schedule for Rating Disabilities, specifically pertaining to the rating systems for conditions within the respiratory, auditory, and mental disorder body systems.

In particular, the changes are going to impact veterans seeking disability benefits for sleep apnea, tinnitus, and, like we mentioned before, those mental health conditions. According to VA at least, these changes would incorporate medical advancements for treating certain disabilities and incorporating modern medical knowledge with the goal of more accurately compensating veterans for their conditions.

It’s important to note from the beginning that these changes are not going to impact the veterans who are currently rated under the old system. And by in large, it won’t affect veterans who have active claims pending. That being said, it could affect future claims which is why we wanted to go over that information with you all today.

So, with that all in mind, Christian, could you please give us a brief overview of the Schedule for Rating Disabilities.

Christian McTarnaghan: Yes, of course. Thanks, Nick. The VA Schedule for Rating Disabilities, sometimes referred to as the VASRD, sometimes referred to as the rating schedule. Basically, this is the title or the US Code that contains all the different disabilities that a veteran can be rated for. It’s divided into 15 different categories depending on the bodily system that is disabled. For instance, there are separate categories for digestive system, respiratory system, one of what we’re going to talk a little about specifically today, musculoskeletal system.

So, for each bodily system, the VASRD, the rating schedule, lists diagnostic codes that basically are four-digit numbers that correspond to a particular disability and that’s how you’re rated. When you get a rating decision, you get a code sheet. You’re going to see a little four-digit number on the left side of the page that corresponds to your disability. And then that disability is going to be rated based on the criteria in the schedule and that’s what’s going to lead to your monthly compensation. So, basically, any disability that you have rated, it’s in the code and it tells raters how they have to rate that particular disability.

The current rating schedule, like you said, Nick, those who are currently rated, this isn’t going to affect them. For those that have claims pending, it shouldn’t affect them. The schedule recognizes ratings at 0 (non-compensable), 30, 50, and 100 for sleep apnea, even if treatments are effective in dealing with the condition.

And so, currently, if you have sleep apnea and your doctor has prescribed and you use a CPAP machine, you’re going to get a 50% rating for that disability. That’s irrespective of whether it helps your sleep apnea, you don’t have any other symptoms or anything like this, anything like that. But, this is not going to be the case if these proposed rule changes are final and actually become how they now rate sleep apnea. So, with the proposed changes, a veteran would get a 0% rating for asymptomatic sleep apnea. So, that’s even if the symptoms are fully treated and asymptomatic because of use of the CPAP. So, this is different than how the schedule works now.

Then, under the proposed change, the rating would increase based on how symptomatic the condition remains after the treatment. So, veterans would be able to get a rating of 10% or higher only when the treatment is either ineffective or the veteran is unable to use the prescribed treatment due to a comorbid condition. So, some veterans that have post-traumatic stress disorder have trouble wearing a CPAP machine, for instance, so that’s, I think, what they’re trying to get at there.

So, this new way to rate sleep apnea allows for VA to formally acknowledge a veteran’s condition without requiring any compensation if the condition is easily managed or treated. So, that’s pretty different. That’s a pretty big difference from how the old schedule looked and how the new proposed rule would work.

Nick: Great. Thanks for that, Christian. And from what we understand so far, it’s looking like tinnitus is going to understand some equally significant changes and how it’s understood and rated by VA. Christine, could you tell us a little more about that?

Christine Clemens: Yes, Nick. Thanks. So, tinnitus is something that a lot of veterans experience. More than 1.5 million veterans are currently receiving disability benefits for tinnitus. Also, sometimes we hear it referred to as tinnitus. This is a high-pitched ringing caused by damage to the ears. There are a number of reasons why somebody could have tinnitus and number of other disabilities it might be associated with, or it might be independent.

And just to reiterate something that you said at the beginning, Nick, these proposed changes would not affect veterans who are currently receiving ratings for their tinnitus. But under the proposed schedule changes, veterans who are diagnosed with tinnitus would need to meet a higher standard, essentially, in order to receive higher levels of disability compensation. VA officials have noted that these changes would likely reduce the number of veterans qualifying for disability ratings of 10% or more. And, although this wouldn’t affect veterans who are currently receiving those ratings, this is something that we see really commonly that veterans experience and so, it will be a significant shift if these proposed changes go through.

Nick: Thanks for that, Christine. And then last but not least, we have changes in the mental health rating criteria. Now, this change, if it ultimately goes through, is a bit different because there are some positives and some negatives to it that we think will need to sort of play out before we get a full grasp on how it might affect how a veteran’s condition is rated and treated by mental health experts.

So, the goal is essentially for conditions like anxiety, depression, or PTSD to be evaluated based on how they affect the veteran’s ability to perform everyday functions with even mild impairment available for compensation.

So, first and foremost, the new proposed rules for mental health conditions would increase the minimum disability rating from 0% to 10%. So, it’s no longer going to be possible to get a non-compensable rating for a mental health diagnosis. The rule would also get rid of a dated part of those Schedule for Rating Disabilities that prevents a veteran from getting a 100% rating if they’re able to work. There are plenty of veterans out there who are able to work in some capacity or another, but ultimately have such severe symptoms that they should be getting a schedular 100% rating. But because they don’t have total occupational impairment under the current diagnostic code, it is completely ruled out for veterans like that.

In addition to those changes, rather than assigning an evaluation based on the number and type of symptoms, VA is implementing a new set of criteria to evaluate mental disorders based on their impacts like we talked about before, and specifically that impact on five domains of impairment. Those new five domains are cognition, interpersonal interactions, relationships, task completion, life activities and navigating environments, and finally, self-care.

Again, the goal of the changes is to better recognize the impact of the mental health condition on their individual well-being by placing a greater emphasis on their ability to function in a work setting rather than just sort of counting different symptoms which is type of the system tends to operate now.

So, with those basics in mind, Christian, can you tell us a big picture. How are these changes going to impact the veteran’s monthly compensation?

Christian: Currently, veterans can receive anywhere from $152 for a 10% disability rating to $3,332 for a 100% rating. So, although these proposed changes don’t change those dollar amounts, what they have potentially, and again, like you said, Nick, I think you made a really good point. These are just proposed rules. None of us have worked on cases that apply them. We don’t have rating decisions that use them. So, we’re not exactly sure what the outcome is going to be. But, looking at it, it seems that it could mean lower payouts for veterans with sleep apnea and tinnitus in the future. But potentially, and again, we have to see how this plays out, higher disability ratings for veterans affected by mental health disabilities. That’s probably, most specifically, because there’s not a non-compensable rating anymore for mental health disabilities.

So again, and I think we’ve stressed this several times, but it’s very important to understand that these changes will not affect you if you’re currently service-connected for a mental health condition. They’re not going to take away your existing benefits. It’s not going to lower your disability ratings. But, because of some rules that VA have, it might actually increase some veterans’ ratings, which would be a good thing. And again, just to put a point on this, on the other hand, veterans who apply for benefits in the future, if these rules are made official, you will see a different set of standards apply to their cases which could change your financial situation and how much money you’re able to get for your service-connected disability.

Nick: Perfect. Thanks, Christian. And then finally, Christine, could you tell us a bit more about when and how these changes will be implemented?

Christine: Sure, Nick. So, VA officials do not have a planned implementation date for the rating changes yet. They are currently in the notice and comment phase. So, when VA proposes to make changes like this to the rating schedule, they go through notice and comment, and the public has 60 days to provide feedback on the proposals.

So, that 60-day period takes us to about the middle of April. Sometime thereafter, VA would review those comments. They will typically respond to any that are significant. They may take back some of the feedback that they’ve received, revise further their proposed changes. Sometimes, they decide not to move forward with the changes, and then other times they decide to move forward. And at that point, they would issue finalized regulations.

As I said, the public does have the opportunity to provide feedback and they can do that electronically on the regulations.gov site. So, if anyone did want to provide their feedback, for example, if tinnitus is something that they think would negatively impact veterans, they don’t really know why VA would be making these proposed changes. Or sleep apnea, they have feedback related to mental health, they could certainly provide that there.

So again, just closing points here. All of these changes are proposed. Some might hurt veterans, some might help veterans. That’s what the notice and comment process is for. It’s for attorneys, service organizations, and veterans themselves to provide feedback. And, VA may ultimately choose to not move forward with some of these proposals. So, we’ll just need to see how things are and then eventually, they may propose that new final rules at some point in the future at which case we can start really practically assessing how these changes will affect veterans and their families moving forward.

Either of you, any additional comments? Great. Thank you both and thank you all for tuning in. Be sure to subscribe to our channel and check out our blog for more information.