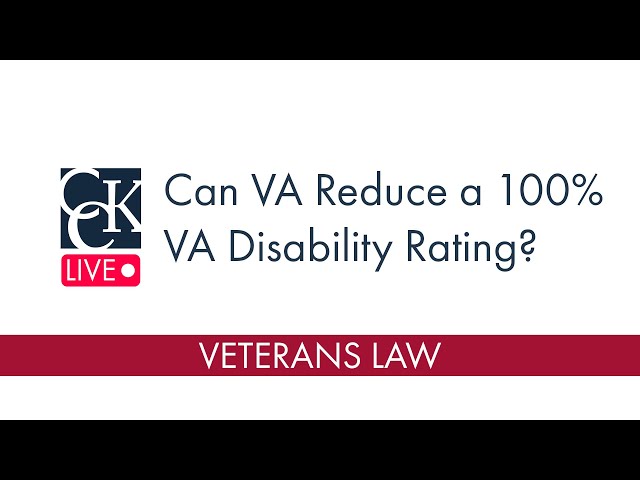 Nicholas Briggs: Good afternoon everyone and welcome to CCK Live. My name is Nicholas Briggs and I’m joined today by Alyse Phillips and Rachel Foster. In today’s video, we will be discussing whether VA can reduce a 100% disability rating. Now, before we get to the subject of the 100% rating itself, we thought it would be helpful to provide a brief overview of how disability ratings work generally.

VA uses a general schedule for rating disabilities to assign diagnostic codes and disability ratings for individual conditions, and each rating criteria describes the certain symptoms or treatments for a specific condition based off of a particular level of severity. These individual ratings can range from 0% to 100%. And generally, the more severe a disability is, the higher rating will be assigned for that individual condition.

The specific rating assigned is also important obviously, because while a 0% rating affords no additional monthly compensation, a 100% rating allows for the maximum schedular benefit, which is currently $3,332 per month. So with that in mind, Alyse, could you tell us a bit more about what’s important about the 100% rating in particular?

Alyse Phillips: Absolutely. So, a 100% disability rating, also known as a total disability rating, is going to be the highest percentage that can be given for a service-connected condition under the schedule of rating criteria. It’s really a rating that’s reserved for veterans that are extremely debilitated. It’s typically someone who’s not able to work and sometimes also not able to care for themselves. So, some examples of what a 100% rating could actually manifest as would be a 100% schedular rating on an award of TDIU or total disability and individual unemployment compensation. And then permanent and total VA ratings, temporary total ratings, and then VA ratings for cancer.

Nicholas: Great. Thanks, Alyse. So, with that in mind and moving on to the topic of today’s discussion. Rachel, can you tell us a bit about the circumstances under which VA can reduce a disability rating in general?

Rachel Foster: Yes. So, if VA finds that a veteran’s condition has improved, and if the condition is not considered permanent, VA can reduce their disability rating. And they can do this according to title 38 of the code of federal regulations, section 3.105E. As well as further, there’s also further guidance given in a precendential case called Brown v. Brown, where a rating reduction may only take place in certain cases where: 1) VA has reviewed the veteran’s entire medical history; 2) The veteran undergoes a thorough examination that is adequate for rating purposes. So, what that means is that an inadequate exam or the examiner maybe didn’t review the relevant evidence, the exam with incomplete, or internally inconsistent, that should not be the basis for reduction. And 3, VA finds sustained improvement in the veteran’s ability to function under the ordinary conditions of life and work.

So, with talking about what sustained improvement means, it means that it’s essentially improvement in the condition or the symptoms that a veteran is experiencing that are not purely circumstantial or attributed to mitigating factors. So, an example of what is not considered sustained improvement is a disability that has a predisposition to temporary or episodic improvement. So, something like bronchial asthma, which can be triggered by environmental factors.

Something that is also not considered sustained improvement is a temporary alleviation of a disability by prolonged rest. Essentially, because a veteran is resting, they’re no longer putting stress on that disability and the symptoms do improve. But if that rest were removed, the symptoms would return. And what is not also considered sustained improvement is a less thorough or complete mode of examination. So, what this would actually mean is that there’s no actual improvement that has been showing for that disability, but instead, that exam fails to fully capture the veteran’s disability picture.

I think what Alyse mentioned earlier, reductions for cancers, those are slightly different. So, if a veteran is service-connected for an active cancer, VA should automatically assign a 100% rating in most cases. This rating continues for as long as their cancer is active, and then for another 6 months following the successful completion of a treatment program. But after 6 months of sustained remission, the cancer is then rated based on the remaining residuals.

One thing to note is any time that VA does believe a reduction is warranted, they must afford the veteran due process and issue a notice of the proposed reduction along with an explanation and give the veterans 60 days to submit evidence and 30 days to request a hearing.

The one exception to this rule is if the reduction would not change the actual amount of compensation that a veteran is receiving. So in these cases, VA would not have to issue a notice of the reduction. They can just go ahead and issue a finalized decision if that doesn’t change the total combined rating.

Nicholas: Great. Thanks, Rachel. With that in mind, we know a bit more about how ratings work and when a rating can be reduced. So, now we get to sort of our question of the day which is can my 100% permanent rating be reduced?

So first, it’s important to know when and if a condition is considered to be permanent. In VA’s case, it deems a disability permanent when it’s reasonably certain based off of medical evidence that the level of impairment currently existing is going to continue for the rest of the veteran’s life. And once VA makes that determination a veteran’s service-connected condition is considered permanent and they’re no longer required to submit to regular reexaminations.

However, just because you have a 100% rating does not automatically mean that the rating’s permanent. But there are certain protections that kick in over the course of several years that may grant permanent status depending on how long the particular rating’s been in place. For example, a rating is considered stabilized after 5 years of continuously being rated at the same level, and at that point, VA’s only going to reduce the condition if multiple examinations and all of the medical evidence support that sustained improvement that Rachel talked about earlier.

We also have the 20-year rule for continuous ratings. Meaning if the same rating has been in place for 20 years or more VA can’t reduce that reading unless there’s evidence of fraud. And then finally, specifically, with 100% total ratings, VA can only reduce those if there’s a material improvement in the veteran’s condition demonstrated both in examinations and other medical evidence.

But if at the end of the day conditions consider to be both permanent and total, VA perceives that there’s no chance of improvement regardless of what happens, then they’ll grab that permanent and total status. Unfortunately, it can be a bit tough to determine exactly when you’ve been determined to be permanent and total. On some rating decisions, it will say there’s a permanent total box that’s checked off if you have 100% disability that’s considered permanent. Other decisions may say that you’ve been granted eligibility for dependents chapter 35 DEA benefits, or CHAMPVA benefits. And if those are established, you have permanent and total status. And then finally their decision might simply say no future examinations are to be scheduled. Those are also good indications of your conditions being considered permanent.

However, if the VA letter clearly states that future exams are going to be scheduled, that means you’re not considered permanent, and VA will do exactly what the letter says. Two to three years from now, they’ll schedule you for an overview examination and then determine what your current rating is or should be. So, with that in mind, Alyse, can you tell us a bit — just go through an example of a 100% rating that might be protected.

Alyse: Yeah. So, one good example is if you’ve had a 100% rating in place for 20 or more years, VA is not going to be able to reduce that unless there’s actually evidence of fraud in the initial rating assignment, which is really hard to show. If it’s been less than 20 years though, VA can pursue a rating reduction but there needs to, as we’ve been saying, it’s to be both material improvement and improvement under ordinary conditions. So, just keep in mind that the 20-year number is pretty significant.

Also, VA cannot simply rely on just one examination for example, when issuing a rating decision. It’s going to have to be something that’s really shown throughout. Now, having a rating of 20 years or more does not mean that it automatically becomes permanent. But if VA does determine that you can’t be subject to a rating after 20 years, then your 100% rating is going to remain the same or be permanent.

Rachel: Sure. So, unemployability benefits or total disability rating based on individual unemployability, TDIU for short, is not always permanent. For veterans that have been granted entitlement to TDIU, VA can only revoke TDIU status if actual employability is established by clear and convincing evidence. That standard is given under title 38 of the code of Federal Regulation, Section 3.343C. In other words, VA can only say sever your TDIU status if you have been found to be capable of substantially gainful employment.

It’s important to note here that in order for the employment to be considered substantially gainful, the veteran would have had to have been employed for at least 12 consecutive months and is earning over the federal poverty threshold.

Nicholas: Correct. Thanks, Rachel. So, again we’ve gone through what disability ratings are, how reductions tend to work, and when and if a 100% rating is considered permanent. However, VA might make that determination and it might not be the correct determination. So, just like with a typical rating decision or seeking an increased rating, if VA does propose to reduce your condition you do have certain rights to include appealing that decision to determine, to have higher level adjudicators determine whether the reduction is proper.

With that in mind, it can be helpful to reach out to an experienced attorney, like those here at Chisholm Chisholm & Kilpatrick, to see if they might be able to assist you in fighting this reduction if it’s something that VA goes through.

Alyse and Rachel, anything else to add that we haven’t covered already today?

Alyse: No. We certainly have some blogs on the topic on our website, so feel free to check those out and I think some more related to reductions as well.

Nicholas: Yup. As always, we have plenty of resources available on these and other subjects. So with that in mind, we’d like to thank you for watching. Be sure to subscribe to our channel and check out our blog for more information on this and other topics.