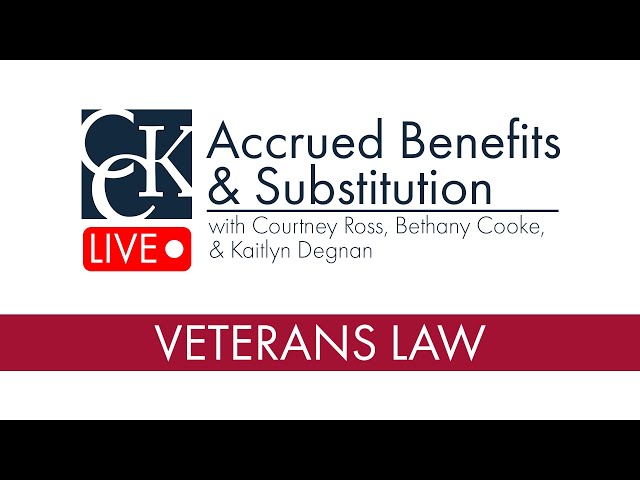 Courtney Ross: Good afternoon, and welcome to CCK live with Chisholm Chisholm and Kilpatrick. I’m Courtney Ross and joining me today is Kaitlyn Degnan and Bethany Cooke. And today we are going to be talking about accrued benefits and substitution.

So before we jump into the specifics of how to apply for the accrued benefit and who is actually eligible, Kaitlyn, I want to turn to you first to clarify if accrued benefits are the same thing as survivor’s benefits.

A survivor of a deceased veteran can file a claim for dependency and indemnity compensation if the veteran’s death was caused by a service-connected condition, but that is a separate benefit from the accrued benefits and requires the filing of a claim for DIC. We have done videos on DIC and survivor benefits before you can find those on our website.

Courtney: Thank you. And those have a lot more detail about what the survivor’s benefits include so I would definitely encourage you to check those videos out if you are looking for more information specifically on survivor’s benefits.

So, Bethany, one concept that I think is critical to understanding to get to the point of understanding accrued benefits is this concept of substitution. Can you explain what I mean by substitution and what that is?

Bethany: Sure. So substitution is the first step in obtaining accrued benefits. So filing for substitution means that an eligible dependent or surviving spouse of the veteran applies to essentially step into the shoes of the veteran in the VA claims or appeals that were pending at the time the veteran passed away.

So when a veteran passes away while a claim for VA disability benefits is still pending, an eligible individual may be substituted into the veteran’s keys to continue that claim for benefits and these would be the accrued benefits that you explained before, Courtney. So if substitution is granted, the claim will then proceed as it would have if the veteran will still alive, allowing additional evidence to be added to the file and for VA to issue a decision on the pending claims based on the merits.

Courtney: Thank you, Bethany. So we have talked or we have mentioned a couple of times since the start of this broadcast about eligible surviving dependents. So who exactly fits into that category, so VA breaks down eligibility as follows;

For example, if a veteran filed a claim in January passed away in June and then their claim was granted in September, the surviving dependent would only receive back pay for the period from January the date of the claim until June the date of the veteran’s death. We have also produced a lot of blog posts and videos on back pay so you can also check out our website if you’d like more information about how that works as well.

Courtney: Thank you. So I want to back up a little bit now and talk about the actual process for applying for accrued benefits. So, Bethany, you mentioned before the importance of substitution in terms of being the first step to applying for accrued benefits, can you expand on the process a little bit and walk us through how to apply for these benefits if you were an eligible surviving dependent?

Bethany: Yes. So I think the first thing to keep in mind is that all claims for accrued benefits must stem from the deceased veteran’s existing claims or appeals for benefits. So this means that a surviving spouse child or dependent parent may not re-open or re-argue a claim that was previously decided and became final.

So essentially, you can apply for substitution and accrued benefits, if one, a veteran passes away there were claims or appeals still pending or if there is even a decision that the veteran was in the appeal period for when he or she passed away. If either of those scenarios applied, that’s when the surviving dependent can request to be substituted into these pending appeals as the claimant for accrued purposes. So how that happens?

The first step in obtaining the accrued benefits is to of course file the proper forms which include both the VA Form 21P-534EZ and the
VA Form 21P-0847 both of which are available on the VA’s websites. So these forms again have to be filed within a year of the veteran’s death in order for the dependent to actually be eligible for substitution. So by filing these forms, you are requesting substitution and accrued benefits at the same time.

If you are an eligible dependent then the regional office should issue a formal decision granting your request for substitution. And once that happens you’re recognized as the claimant in the appeals are claims that were pending at the time of the veteran’s death.

At that point the what the VA will do is for lack of a better word reactivate what was pending when the veteran passed away and we will proceed to issue decisions on them. So the claimant is then able to collect the retractive award of benefits should be an issue or favorable decision or if VA continues to deny the claims or appeals, the claimant is able to file the appeals on them as if they were the veteran.

And remember, given that the claimant is now for all intents and purposes, the veteran in these claims can submit evidence to support that the veteran was entitled to the pending benefits such as medical or lay evidence supporting the claim.

And I’ll just close again with the reminder that it’s very important to file the claim for substitution and accrued benefits within a year of the veteran’s death, if you don’t do that, then that avenue is essentially closed to you. Those pending in appeals or claims are done and you can no longer be substituted into them if you have missed that your window.

Courtney: Thank you, Bethany. I think that that outline of the process hits a lot of critical points to include the importance of that first step of establishing substitution before you can really get into establishing or reactivating the pending appeals and establishing entitlement to a group benefit.

Thank you for outlining and kind of walking us through the steps of that process. Kaitlyn, do you have any additional closing thoughts before we wrap up today’s broadcast?

Courtney: Thank you both for joining me today to talk about accrued benefits and substitution. Don’t forget to follow us on social media and check out our extensive video library on our blog for more information on a variety of topics related to VA law. Thank you.