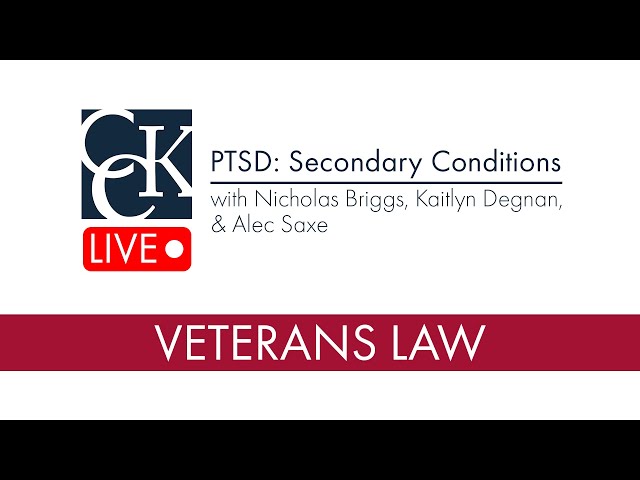 Nicholas Briggs: Good afternoon and welcome to CCK LIVE. My name is Nicholas Briggs and I’m an accredited VA Claims Agent here at Chisholm Chisholm & Kilpatrick, representing veterans before The Board of Veterans’ Appeals. I’m joined today by Kaitlin Degnan and Alec Saxe, both of whom are attorneys here at CCK, representing veterans before the US Court of Appeals for Veterans Claims.

Today, we’re going to be talking about VA ratings for conditions that develop secondary to PTSD. Before we get started, just a quick overview of PTSD. It’s a mental health condition that occurs as a result of experiencing a distressing, shocking, or otherwise traumatic event. Many veterans that we work with develop PTSD as a result of events they witnessed or experienced during their military service.

PTSD can be diagnosed by a medical professional, whether it be a therapist, psychiatrist, or general practitioner. And one other important note is that the symptoms and severity of PTSD can vary pretty widely from person to person. We’ve had a lot of content related to PTSD and that’s all available on our website and our blog. So, feel free to check that out if you want more information about PTSD specifically. Alec, in order to get us started, could you tell us a bit about what it means to establish secondary service connection? And then about some of the more common conditions that we see associated with PTSD.

So, in other words, if there’s medical evidence showing that your service-connected PTSD, aggravates, or increases in severity a non-service-connected condition, you may be able to receive compensation for that aggravated condition. And then some of the most common secondary conditions that we see, sleep apnea for one, that’s a sleep disorder in which a person’s breathing is repeatedly interrupted during the course of the night. It’s often characterized by additional symptoms such as snoring or daytime fatigue.

So, in order to confirm the diagnosis of sleep apnea, worth noting for VA disability compensation purposes, VA requires that a sleep study be conducted. Once you’ve been service-connected for sleep apnea, you may be rated anywhere from 0 to 100 percent, depending on the severity. And I know that off the top of my head, the veteran may be entitled to a 50% just based off use of a CPAP, a breathing machine.

And research has shown that PTSD, veterans with PTSD have a higher risk of developing sleep apnea. There’s a direct correlation regarding the two, meaning the more severe a veteran’s PTSD is, the more severe their sleep apnea can be. Some studies have shown many factors that aggravate PTSD can also aggravate sleep apnea. For example, sleep deprivation, insomnia, hyperarousal, and daytime sleepiness all affect both PTSD and sleep apnea. Additionally, there are certain medications that you may take for PTSD, particularly sedative medications that can cause or aggravate the underlying PTSD.

Kaitlin Degnan: So, one thing that is commonly linked to PTSD is depression and anxiety. Depression is a serious mental health condition that affects the way a person thinks, feels, and acts, and common symptoms can include persistent sadness, irritability, fatigue, and a lack of motivation.

Anxiety is defined as intense, excessive, and persistent worry and fear about everyday situations. There are several types of anxiety disorders, such as generalized anxiety disorder, panic disorder, and various phobia-related disorders. And the reason why we so commonly see these linked to PTSD is because traumatic events often leave people feeling upset, stressed out, and worried.

Another common condition is gastroesophageal reflux disease or GERD. This is a digestive disorder characterized by the occurrence of stomach acid flowing back up the esophagus from the stomach causing discomfort and inflammation. GERD is caused by frequent episodes of acid reflux and common symptoms can include heartburn, difficulty swallowing, regurgitation, and chest pain. Typically, GERD is rated analogous to hiatal hernia and rated between a 10 or 60 percent rating.

So how does PTSD lead to GERD? Well in one example, veterans that take SSRIs to help manage their PTSD symptoms may also have side effects that lead to digestive system issues. Any conditions that result from the use of medications to treat a service-connected disability may also be service-connected.

Nicholas: Generally speaking, a lot of veterans experience hypertension and other heart-related conditions secondary to PTSD. Are there any other neurological conditions that we see associated with PTSD?

Alec: Yes, migraines. Migraines are another condition that can be linked with PTSD. They are a form of headaches that can last for many hours that bring pain, nausea, vomiting, sensitivity to light and sound, lightheadedness, and blurred vision. Migraines can also create a throbbing sensation on either side of the head, sometimes an aura, which is categorized by visual disturbances such as flashes of light. It may come before a migraine.

So, there’s no singular definitive cause of migraines, but triggers are thought to include emotional imbalance, alcohol, stress, sensory stimulation, certain foods, and changes in their environment. And they are rated on with the neurological conditions and convulsive disorders from 0 to 50 percent.

Nicholas: Thanks, Alec. Kaitlin, we talked a bit earlier about GERD as an example of a condition that develops secondary to PTSD itself and as a result of the medications used to treat PTSD. Are there any other conditions that are typically associated with medications or PTSD itself in this way?

Kaitlin: Erectile dysfunction, kind of results from the emotional stress caused by PTSD, or also due to the use of PTSD medication. Erectile dysfunction is the inability to obtain or keep an erection, firm enough for sexual intercourse. So again, that can be just due to the PTSD itself, or as a result of medication. VA doesn’t have a specific disability rating for erectile dysfunction. Instead, it will rate the condition under various diagnostic codes in Section 4.115B. And although ratings may range between 0 and 30 percent, the most common situation that we see is the award of a 0 percent rating. This allows additionally for the award of special monthly compensation based on the loss of use of a creative organ, which is currently compensated at about a hundred and eleven dollars per month.

Alec: Special monthly compensation is just one example of some of the additional benefits that can be granted based off of these conditions, so SMC benefits the separate ratings themselves, but you can also consider these conditions, along with PTSD, and examining other potential benefits a veteran might be entitled to.

In this respect Kaitlin, can you tell us a bit more about TDIU and how it relates to PTSD and secondary conditions?

Kaitlin: Yes. So, if your PTSD and other related conditions impair your ability to work, you might be eligible for a total disability rating based on individual unemployability or TDIU, as we commonly refer to it. And TDIU allows a veteran to receive compensation at the 100% rate if their service-connected condition or conditions prevents them from securing and maintaining substantially gainful employment. To see if you qualify for TDIU, check out our blog. We have tons of videos on our website about TDIU, how to get TDIU, what it pertains to, etc.

Nicholas: So all of the information that we’ve gone over today is available on our website. I think the main takeaway here is that there are many different conditions that became can be caused or worsened by PTSD. So even if you’re not sure that it’s related to PTSD, veterans should definitely consider filing claims. VA does have a duty to assist and they will provide you with a medical opinion if there is evidence linking your PTSD to these sorts of conditions. So, it’s always worth trying. Even if you aren’t necessarily sure it’s related.

Kaitlin: I would just say kind of stemming off of that, that’s why it’s really important to when you go for a VA exam to tell the examiner all of the symptoms that you are experiencing that might be related to your PTSD. That’s the best way to spur VA into looking into getting a service connection for them. They’re not going to do it unless you tell them so it’s really important to be honest with your examiner.

Alec: Any medical evidence that you can provide to VA upfront will go a long way and may lead to granting you the benefits for the condition without having to attend these compensation and pension exams.

Nicholas: Absolutely. Well, thank you all for joining us today. Please be sure to visit our blog at cck-law.com and please be sure to subscribe to our channel as well. Thank you.