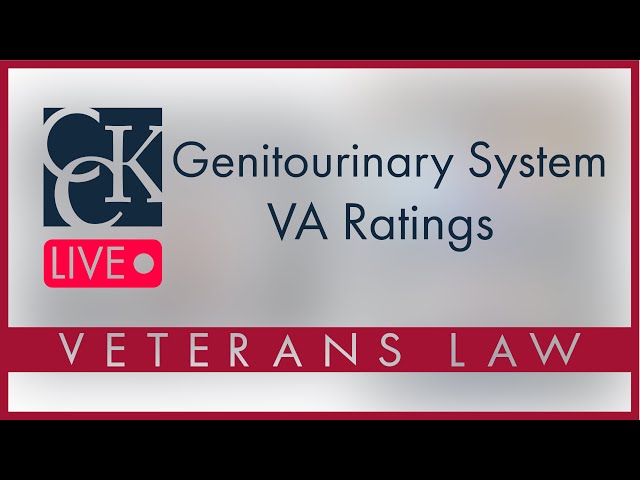 Kayla D’Onofrio: Welcome to CCK Live. My name is Kayla D’Onofrio. I’m joined today by my colleagues Matthew Fusco and Alec Saxe. And today we’re going to be talking about how VA rates conditions that affect the genitourinary system.

These two systems are grouped together in the VA rating schedule because of their proximity to one another and their use of common pathways within the body. Some of the primary functions of the genitourinary system include excretion of liquid waste products, regulation of blood volume, electrolyte regulation, acid-base balance regulation, and arterial blood pressure regulation.

We’re going to talk about a number of different examples of some of these conditions today, but just to name a few of the common ones that we do see, it would include things like renal failure, kidney stones, and prostate cancer.

Now, if you have one of these conditions and you believe that it’s related to service, the next thing that you would want to do is file a claim for service connection. Alec, what would a veteran need to do if they thought that their condition was related to service? And what sort of things would they need to show VA to be successful?

Alec Saxe: Yes, so in order to establish direct service connection for these types of conditions, veterans must demonstrate that the condition is related to their time in service. So, you can do that by showing the three elements of service connection and that they’re satisfied.

And then, after reviewing a veteran’s claims file and the evidence submitted, as well as the results from VA treatment records or compensation and pension examinations, the VA will make a decision on the service connection claim. If it concedes service connection for the condition, then I’m going to assign a disability rating based on its severity.

Kayla: Great. And just to note, when filing service connection claims, VA does require specific forms for these. If it’s your first time filing a claim, they are going to require that you do so on a 21-526EZ form. If it’s not your first time filing the claim and it’s been more than one year since you were last denied for the claim, they will require you file a Supplemental Claim with new and relevant evidence, and that would be the 20-0998 form. Excuse me, the 20-0995 one that you would use.

So, just something to keep in mind if you are interested in filing the claim. But as Alec said, once VA does concede that your condition is related to service, the next thing that they’re going to do is decide what rating they should be assigning it and that will be based on the severity.

So Matt, what does VA do when they’re rating disabilities for the genitourinary system, and specifically, how do they rate the conditions within the urinary system?

Matthew Fusco: Sure. So genitourinary conditions are rated under 38 CFR 4.115a, which is titled Ratings of the Genitourinary System – Dysfunctions. Conditions affecting kidney function are referred to as “renal,” while ureters, urethra, and bladder conditions are called “urinary.”

Some of the common examples that we see of conditions that are rated under this general formula include nephrectomy, which is the removal of one kidney. This condition is automatically going to be rated at 30%, but it could be higher depending on the working condition of the remaining kidney. Another common one is nephritis, which is the swelling of the nephrons within the kidney. This condition can only be rated if it’s directly caused by an infectious disease and it has continued despite the appropriate treatment of that disease.

Another one is pyelonephritis, which is a form of nephritis where a urinary tract infection has spread up to the kidney. And this condition can be rated either in the renal rating system or on ratings for the urinary tract infection. It’s going to be whichever ones resulting in the higher rating to the veteran. That is part of VA’s duty to maximize your benefits, especially if there is more than one diagnostic code that might list symptoms that kind of encapsulate the condition that you have.

Another very common one that we see is kidney disease, and that would be for any kidney disease that requires regular dialysis. And then the last one that I’m going to talk about is the kidney transplant. Kidney transplants are automatically rated at 100%, for one year following the transplant surgery. After the expiration of that one-year period, that condition will be re-evaluated, and then rate it on any symptoms under the renal rating criteria. The minimum rating that they’ll assign at that point is 30%, but they will likely send you to a compensation and pension exam to see if you would warrant a higher rating. So, if you are scheduled for one, it is important that you attend to make sure you’re maximizing the rating that you can get out of that.

Alec, how does VA rate cancers affecting the genitourinary system?

Alec: So, typically, veterans diagnosed with service-connected cancers of the genitourinary system are awarded at 100% temporary total VA rating. While the veteran is still receiving treatment and then for the six months following the completion of that treatment. From then on, veterans are rated on the residuals, such as, as we talked about, urinary infrequency, that’s for prostate cancer, for example.

And in addition to cancer, the veterans with genitourinary conditions may be entitled to what’s called TDIU, or Total Disability based on Individual Unemployability. This is a VA benefit that compensates veterans who are unable to work due to their service-connected conditions, and it awards a total of 100% rating. So, it’s intended for veterans who cannot maintain substantially gainful employment due to the genitourinary condition, or any other condition for that matter.

Two things to note, there are two kinds of TDIU, schedular and extraschedular. Veterans affected by the genitourinary condition may be eligible for TDIU, schedular TDIU, if they meet certain criteria that’s established where the veteran has one service-connected genitourinary disability rated at least a 60% disabling, or the veteran has more than one service-connected disability with one condition rated at least 40% and a combined rating of at least 70%.

And then, beyond schedular TDIU, veterans who don’t meet these requirements may still be applicable to qualify under an extraschedular basis.

Kayla: Great. Thank you, both. I think that’s a really good place for us to wrap up today’s broadcast. To learn more about TDIU VA ratings and the service connection process in general, we do have a lot of other content available on our website, including blog posts and an extensive library of videos on YouTube. So, I definitely recommend checking those out for more information about these topics. TDIU, service connection, everything else that you can imagine.

Also, be sure to subscribe to our channel to stay informed, and thank you so much for tuning in.