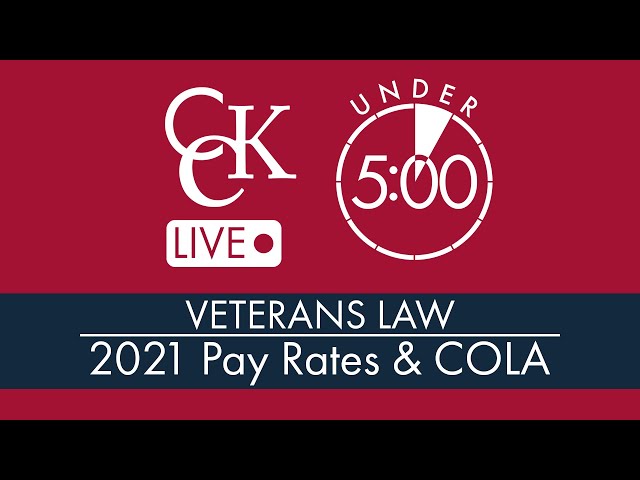 Christian McTarnaghan: Hi everyone. My name is Christian McTarnaghan. I am an attorney at Chisholm Chisholm and Kilpatrick. And today we are going to be discussing COLA and disability pay rates for 2021. All right, so you might be asking, what is Cola? So that is an acronym for the cost of living adjustment. The yearly change in the cost of living as determined by the Social Security Administration or commonly referred to as the SSA.

Christian: In 2021 Americans who rely on Social Security benefits, VA disability benefits, military retirement pay, and other government benefits will see a 1.3 percent increase in their monthly compensation. How does the government determine what the cost of living adjustment would be? The Social Security bases the COLA rates on the percentage increase of the Consumer Price Index for urban wage earnings and clerical workers, otherwise known as the CPI-W. It determines that from the third quarter. So from July, August, and September of the previous fiscal year and they compare it to the third quarter of the current fiscal year. And so that is where we see the one point three percent increase. It is going to go into effect on December 1st of 2020.

Christian: How are these pay rates determined? We are going to go through what the pay rates are based on the percentage of disability in detail, every single one, a little bit later in this talk. But the pay rate is determined by your combined disability rating. So VA uses the COLA rate to adjust these monthly disability compensation amounts each year. Just a reminder, you are not going to receive separate compensation for each of your service-connected disabilities. You have a thirty for your right knee, a thirty for your left knee, you are not going to get two thirties. You get one monthly payment based on all of your disabilities combined into one disability rating. So it is important to note that you can get additional monthly compensation if you’re a veteran, if you have qualifying dependents, if you have a combined disability rating of at least thirty percent. Qualifying dependents include minor children under the age of eighteen, children between the ages of eighteen and twenty-three who are still in school, your spouse, and dependent parents if you have them.

Christian: We have a lot more information on this topic. And if you want to learn more, please visit our blog it is cck-law.com. We are going to have a link to the rates in the comments section. And please do not forget to follow us on social media to stay in the know on the latest veterans topics.