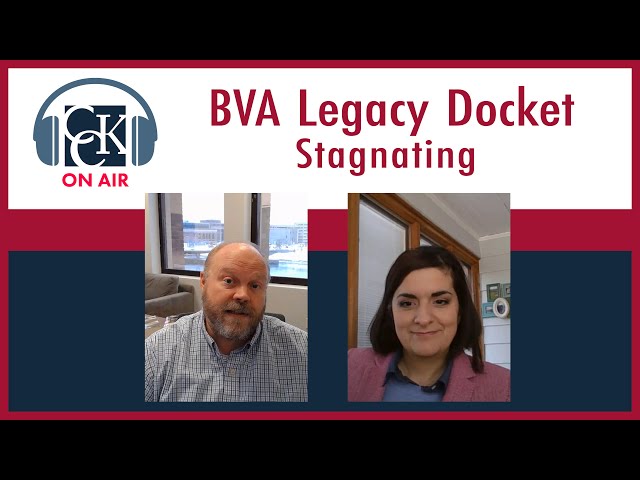 Today, we’re going to be discussing the increasing backlog at the Board of Veterans’ Appeals. Now, the Board decides all the appeals within the Department of Veterans Affairs itself. At the beginning of each year, the Board sets a goal for the number of decisions it will decide. And the Board’s year begins on October 1st and runs through September 30th. For this year which began on October 1st, 2021, the Board stated its goal was to decide 111,500 decisions.

Let’s discuss a little bit about how the Board is doing. As of January 16th, there were a total of nearly 202,000 appeals pending at the Board of Veterans’ Appeals. That’s a tremendous number of appeals. About 85,000 of those are pending and what they call the Legacy system, meaning the claims were filed prior to February 2019 and are in the old VA appeal system. And about 117,000 appeals are in the new appeal system: the Appeals Modernization Act system, or the AMA.

Now the Board’s goal for this fiscal year from October 1st, 2021 to September 30th, 2022 is to decide and mail 111,500 decisions. The problem is that as of January 16th, the Board has only processed 25,000 appeals for the fiscal year 2022 across both Legacy and AMA. So, that means they’re about 2,200 fewer decisions than this time last year. And there are about 5,700 decisions behind their goal.

Here’s the bottom line. The Board of Veterans’ Appeals is experiencing a massive backlog of appeals due in part to factors such as COVID-19, mail delays, issues with C&P exams, and more.

Christine Clemens: So, with respect to Legacy appeals Brad, during the first week of August 2020, it was reported that BVA was working on appeals with docket dates up to July of 2019. And they said that that was due to a large volume of legacy cases that were coming in. And that date, I believe you mentioned this earlier, but that date applies to the working docket and not hearings.

This is significant though because the docket they’d had was April 2020 just a week prior. And interestingly enough, the current legacy docket decision date stands at August 2019. So, that marks approximately 18 months of no movement in the processing of legacy appeals. What about AMA? Wondering about maybe their working AMA appeals.

The promise of AMA was to eliminate the backlog and that has not happened. We’ve continued to see a backlog. We’re seeing a backlog in both systems. The direct docket was promised to issue decisions within 365 days. That’s not happening. Unless you’re filing a motion to advance, we’re not seeing decisions in 365 days.

Typically, it’s about 18 months or longer. And that 18-month window is what the evidence docket was supposed to be but it hasn’t been that either. There isn’t data on how long the evidence docket is taking but speaking from experience, it’s definitely taking longer than 18 months. So, the Board’s not meeting any of the targets that it had set.

Why has the docket date barely moved since August 2020? And why isn’t BVA further along with AMA appeals?

Brad: So, that’s a great question, Christine. And so let’s talk about what the Board itself has said. It has claimed that the delays in the AMA appeal decisions are due to the Board’s focus on Legacy appeals. They’re prioritizing the Legacy appeals, which makes sense. The problem is that the Legacy appeal backlog hasn’t gone down nearly as much as they wanted to either.

So, is this truly the case that this is the reason why the AMA cases aren’t being decided because the legacy docket continues to be virtually stagnant. Based upon the information in belief is what CCK knows about this issue. The Board is focusing on remanded cases, meaning cases that are returned from the Regional Offices after additional development has been done. And it’s returned to the Board of Veterans Appeals.

Some of that is due to them hiring new veterans law judges, as well as new attorneys. However, the interesting thing about them hiring new veterans law judges is that many of the judges that they’re hiring have zero experience in deciding veterans benefits cases. You’ve heard me correctly. They have zero experience. And as a former veterans law judge myself I think it’s disgraceful that these folks are being hired to decide these cases when this is a complex area of the law and it can take two to four to seven years to really get this under your belt properly. It’s not good.

Furthermore, the Board has been focusing on hearings because there is a huge hearing backlog. However, many of those hearings have been affected by the COVID situation. And therefore, they’ve been doing them remotely, which is great, they have been making progress on the hearing backlog but conducting hearings and deciding appeals are the Board’s mission that it’s been doing since the 1930s. It should be able to do both. It’s like walking and chewing gum at the same time. This is the Board’s mission. It has to figure out how to do both.

However, we know that that’s not always the case. We know that some cases are operating outside of that algorithm including attorney fee cases, which are getting decided much faster. So, it raises some questions as to the accuracy of this algorithm and whether it’s doing what it’s supposed to be doing. CCK has submitted a Freedom of Information Act request to determine exactly how this algorithm works and whether it’s doing what the agency says it’s actually doing.

Christine: Unfortunately, there are no real courses of action directly related to the backlog that veterans can take to have their Board appeal decided faster. Some veterans might be eligible to advance their case on the Board’s docket if they’re terminally ill, age 75 or older, facing severe financial hardship such as being evicted, foreclosed upon, etcetera. If they faced a natural disaster or another qualifying circumstance. But that’s not going to apply to most veterans in the system.

One thing that they might think about doing is reaching out to a congressperson, getting them involved. VA has made promises publicly to Congress, they’ve asked for resources. They’ve received an allocation of funds for those resources that they requested and they’re still failing to meet the goals. They’re failing to make these promises to veterans.

Congress should be involved in holding VA accountable, and the way that they get information is from their constituents. Veterans can and should reach out to them. But unfortunately, there’s not a whole lot more that they can do other than wait.

And one thing that I always like to remind people it’s a long process, so don’t give up. You’re entitled to these benefits and you should be receiving them. Don’t let VA off the hook, we won’t either. We’ll keep providing information on it. Just keep trucking along.

Brad: As these delays continue, hundreds of thousands of veterans are left without access to the benefits they rightfully deserve and often depend upon to support themselves and their families. So, if you require assistance from a decision from the VA, at the Board, or appealing a Board decision at the Court of Appeals for Veterans Claims, or anything related to the VA, after you’ve received the decision and you think you’ve been wrongfully denied, please contact us here at CCK. We’re available via social media. You can check us out on our website at CCK-law.com.

If not us, find an accredited representative to help you. Be it a veteran service organization, accredited attorney, or agent to help you through the process. We offer complimentary consultations to determine if we can help. And do you have any final words Christine before we go?

Christine: It’s not a great situation but veterans aren’t alone. And I think you hit the nail on the head. Make sure that you have an accredited representative to guide you through it, to at least bounce ideas off of, and don’t give up.

Brad: Well, thank you all for tuning in. Again, I’m Brad Hennings, for Christine Clemens and the entire team here at CCK. We have appreciated you tuning in. We’re going to keep our eyes on this topic, and we will report back with additional information as we get it. Thank you very much.