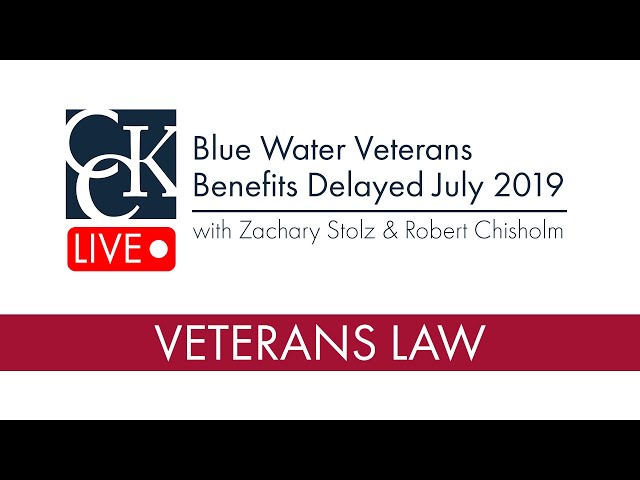 Zach: Good morning everyone.  This is Zach Stolz from Chisholm Chisholm & Kilpatrick, and my law partner Robert Chisholm.

Zach: A Chisholm Chisholm & Kilpatrick is joining me today to talk about in a very short Facebook live update about the recent Blue Water Navy bill that passed in the United States Congress and was signed by President Trump. There is an unfortunate development frankly in what is going on with that so we just wanted to let our clients and people who are interested in this area of law know what is going on. So, Robert, let’s do a quick rehash of what is in that Blue Water Navy bill, what the Blue Water Navy class of people is and just kind of ducktail on what we did a couple of weeks ago with our Facebook live and what is all over our website about this issue.

And then the third class of people who get a benefit from this are the children of veterans who suffer from spina bifida whose parents served in Thailand between January 9, 1962 and May 7, 1975 but the statute only covers the children. As a point of interest, we’ve represented a lot of veterans who were exposed to Agent Orange in Thailand and been successful with their claims. But that’s not direct service connection and this will create a presumption for the children of those veterans who suffered from spina bifida. So that’s sort of the quick overview of the statute. And now for the development, I guess.

Zach: So, this is all great news. It’s something that Congress worked on for a very long time. They had a lot of input from experts around the country, a lot of input from the Department of Veterans Affairs itself. It’s a wonderful development. It comes on the heels of the Procopio decision which we have discussed several times and which again you can find on our website cck-law.com. Unfortunately, there is going to be a delay in implementing these long overdue benefits to veterans. The Department of Veterans Affairs and specifically the secretary himself Secretary Wilkie issued a stay just two weeks ago on July 1, 2019, and Robert can you talk a little but about what that stay means and why he did it?

Robert: First of all, stay means they are not going to adjudicate any of these claims until January 1, 2020, that’s what the stay says, but not only does it apply to claims that haven’t been filed, it also applies to pending claims either before the Regional Office or the Board of Veterans’ Appeals. So that means anyone that has a claim that is sort of in the hopper either before the Board or before the Regional Office, those claims are going to be stayed. And the VA’s reason for that is to get its resources allocated correctly and prepare for all these claims. So, what’s interesting is the statute, this new statute, the Blue Water Navy Vietnam Veterans Act of 2019 specifically gives the secretary the authority to do this. It doesn’t say the secretary has to do it; it says he may stay pending claims. And the secretary as of July 1, 2019 has issued this stay. The stay is up on our Facebook live and it’ll be up on our website later today so if you want to take a look at the stay you can look up what it says. But basically, it says he’s staying the cases till January 1, 2020. And I do want to add a caution here or a caveat. And that is that there is nothing preventing the secretary from staying longer than that if they’re not ready to go January 1, 2020. So that’s where we are the moment.

Zach: And it does appear that VA wants to work as quickly as they possibly can on these, and so hopefully January 1 is the extent of the stay. We’re over halfway through the year of 2019 so we’re crossing our fingers and very hopeful and we’ll do anything that we can do to make sure these cases move along especially once the stay does lift. Another important thing to note about this is some cases especially at CCK where we have a large Court of Appeals for Veterans Claims practice have taken up to the federal courts, the Court of Appeals for Veterans Claims, this stay should not affect those cases.

However, if one of those cases is remanded or sent back to the Department of Veterans Affairs or to the Board of Veterans’ Appeals, the likely scenario, we think, this is just an opinion, the likely scenario is that while the court case is able to continue, should the Court order it back to the VA it is going to just end up being stayed back there as well. So, people who are veterans out there who are relying on this Blue Water benefits, hang in there, you’ve come this far, it’s been many, many years and now it’s going be a couple more months. It’s kind of the bottom line of it and we have no reason to believe that VA isn’t doing everything it can to do this as quickly as possible. But it is disappointing news in my opinion frankly, after all this time to kind of get to the top of the mountain and then see a little bit more mountain to climb.

Robert: I do want to point out that this shouldn’t prevent anyone from filing their claims.

Robert: Please file your claims if you fall within this category of veterans. There’s nothing to prevent you or should prevent you from doing that because that then preserves the start date of your benefits or what we call the effective date.

Zach: Don’t be discouraged, hang in there.

Zach: This is Zach Stolz.

Robert: This is Robert Chisholm.

Zach: Robert Chisholm. Have a good day. Thanks very much.