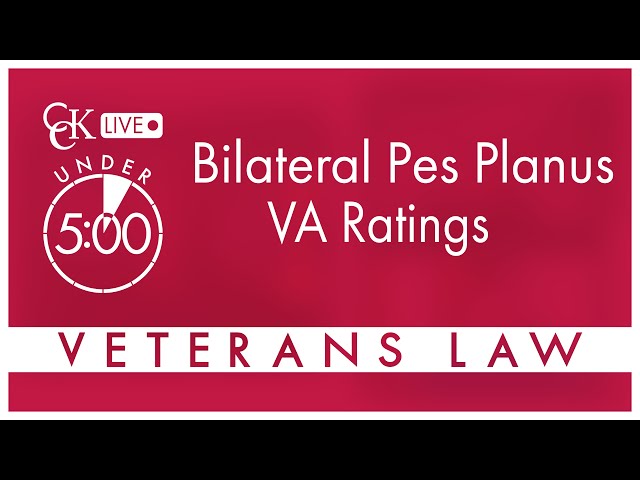 Nick Briggs: Good morning and welcome to CCK Live Under 5:00. I’m Nicholas Briggs, and today we’ll be reviewing VA ratings for bilateral pes planus. Pes planus, often referred to as flat feet, is a common foot deformity in which the arch of the foot is flattened to the point where it touches or nearly touches the ground. Ligaments and tendons from the lower leg in the foot form the arches in people’s feet, and when these tendons don’t pull properly, the foot has little to no arch, resulting in flat feet.

Now, oftentimes, this won’t cause symptoms itself. But as the condition becomes more severe, additional symptoms can include the feet tiring out easily, aches or pains in the areas of the arches themselves or on the heels, foot swelling, difficulty performing certain movements such as standing on your toes, as well as pain in other areas including the legs and the back.

Pes planus is a condition that often affects both feet. So, it implicates VA’s bilateral factor. The bilateral factor is when a veteran has a disability that affects either both arms, both legs, or paired skeletal muscles. In those instances, the ratings for each side, the left and the right sides, are combined separately. And then 10 percent of that combined rating is added to the total before the disabilities are combined with any other conditions.

The bilateral factor is a recognition on VA’s part that the limitations of a disability affecting both sides is necessarily going to be more severe than each disability separately. So, it’s an attempt on the VA’s part to show the impact of bilateral disabilities in a veteran’s overall combined rating.

In terms of specific ratings for pes planus, VA rates veterans under 38 CFR 4.71a with the specific diagnostic code being 5276. And ratings under this diagnostic code range from 0 to 50 depending on the scale of symptoms, ranging from mild to severe, as well as whether one or both feet are affected.

So, a veteran with mild symptoms of flat feet is a veteran who uses arch supports to successfully relieve their symptoms. And as a result, they’re assigned a 0 percent rating for their mild, controlled symptoms.

In contrast, a veteran experiencing moderate symptoms will have a weight-bearing line that is over their big toe rather than spreading across their entire foot. And as a result of the shift in the weight-bearing line, there’s an inward bowing of the Achilles tendon and pain on manipulation or use of the foot.

So, that’s all the information that we have for you today on pes planus. We have additional resources on this and other conditions available on our website, as well as other relevant videos going over the topic. So, thank you again for tuning in and please feel free to visit our website, CCK-law.com, as well as our YouTube channel to enjoy more of our content. Thank you.