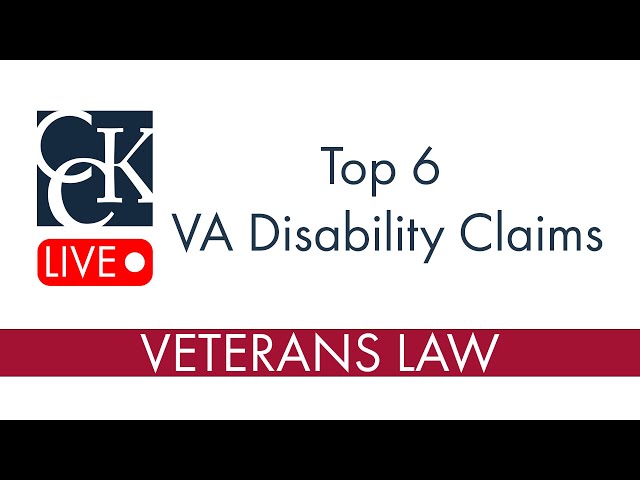 Jenna Zellmer: Hello and welcome to CCK Live. My name is Jenna Zellmer, I am one of the attorneys here at Chisholm Chisholm and Kilpatrick who works primarily at the Court of Appeals for Veterans Claims, working on veterans benefits appeals. And joining me today are Brandon Paiva and Rachel Foster who practice primarily at the VA, representing veterans in obtaining those benefits.

So, with that background, there are certain conditions that are particularly common among veterans regardless of their branch of service. Today, we’re going to be talking about those top 6 most common VA disability claims.

As always, you can find more information on our website and we will link some links to the blog below in the comments so you can learn more about this at your own leisure. But kick it off, Rachel. Let’s talk about the top disability claim, PTSD.

Rachel Foster: Yes. So PTSD, or post-traumatic stress disorder, is a mental health condition that results from experiencing a distressing, shocking, or otherwise traumatic event. The symptoms and severity of PTSD can vary from person to person, but the most common symptoms include reexperiencing the trauma through intrusive distressing recollections of the event, flashbacks, and nightmares. It can also include emotional numbness and avoidance of places, people, and activities that are reminders of the trauma. And third, it can also result in hyperarousal that can manifest as difficulty sleeping, difficulty concentrating, feeling jumpy, and being easily irritated and angered.

We have a lot of videos that discuss PTSD specifically. But as a quick overview in order to establish service connection for PTSD, veterans must verify an in-service stressor that they believe caused their PTSD. This must be corroborated through evidence such as lay statements detailing the occurrence.

VA rates PTSD under the Schedule of Ratings for mental disorders. So, 38 CFR Section 4.130. And its diagnostic code is 9411, and they can receive different ratings at 0, 30, 50, 70, or 100%. The ratings for PTSD are based on the level of social and occupational impairment as well as the frequency duration and severity of those symptoms.

Jenna: Thanks, Rachel. Like you said, we have a lot of veterans who have PTSD, and so we have a lot of information on our website and on our blog about PTSD. So, if that’s something that you think you have, or if you already are service-connected for it and are looking for a higher rating, I would encourage you to look at our website. Brandon, let’s go on to the second top disability claim.

Brandon Paiva: Thanks, Jenna. The second top most common VA disability that we typically see, at least for our practice, is what’s called lumbosacral and cervical strain. So, essentially back pain or back conditions.

VA rates back conditions, such as the lumbar and cervical strain, under 38 CFR 4.71a, Schedule of Ratings, which is the musculoskeletal system. And the criteria is largely based on a veteran’s range of motion like I had said. Typically, and very similar to most other service-connected conditions with the back condition, VA has sort of a rating scale that goes from 0 to 100%.

Jenna: Great. Thanks, Brandon. Following along with the lumbosacral and cervical strain, another common disability claim is for a different orthopedic condition, which is limitation of motion of the knee. We have a ton of veterans who have knee disabilities, limitation of flexion specifically is the most common, but you can also have limitation of extension and a bunch of other different separate ratings based on different knee disability manifestations.

But, limitation of flexion is the range of motion the knee as the veteran moves it or curls it inward towards the body. So, if you think about doing, either a lunge or just when you’re sitting down when your knee is in that kind of 90-degree position.

So generally, VA rates this condition as a musculoskeletal condition, so it’s also under 38 CFR 4.71a. VA looks at the range of motion and degrees rather than the pain itself caused by the motion. So, you can get a rating under Diagnostic Code 5260 at 0, 10, 20, and 30%, but the most common rating that VA assigns is that 10% rating.

But, for both the limitation of knee and what Brandon was talking about before for the back, VA often rates it solely on the range of motion. But, there are other regulations that require a VA to look at some of the functional impairment that orthopedic conditions cause. So, I would really encourage you to check out some of our other videos that go into a little bit more detail about how to rate orthopedic conditions because we often see that VA is not maximizing the benefits the veteran can receive.

So that’s number three. Rachel, why don’t you tell us about number four?

Rachel: Yes. So, number four are scars. Veterans can receive service connection for scars that result in their time in military service or from service-connected conditions that require surgery that resulted in scarring.

Scar disabilities are rated under 38 CFR, Section 4.118. Diagnostic Codes ranging from 7800 to 7805. Scars are rated based on a variety of different characteristics. So, it can be the number of scars or the number of disfigurements that the scar causes, the area of the body affected by the scars, their permanence, and the presence of pain, or whether they are considered unstable.

Rachel: Yes, those are super common. Brandon, what about the next one?

Brandon: Number 5, we’re talking about tinnitus, sort of that annoying ringing in your ear. Generally, tinnitus, like I had previously just stated, refers to the perception of noise or typically ringing in the ears, often what veterans or people who suffer from tinnitus will often report. It’s often a symptom of an underlying condition such as hearing loss, an ear injury, or even a circulatory system disorder. Common symptoms of tinnitus include phantom noises in the ear such as ringing, buzzing, and even roaring, clicking, hissing, and humming.

Veterans don’t need specific diagnosis of tinnitus in order to be granted service connection for this condition. They can provide a subjective report of their symptomatology, which is enough to show that they meet the rating criteria. VA rates tinnitus under 38 CFR 4.87, under diagnostic code 6260. So, 6260 is what tinnitus is rated under.

The highest schedular rating for tinnitus is 10%, which takes both ears into account. So it’s not like, because you have tinnitus in one ear and the other, that you get two 10%. Tinnitus is rated bilaterally at 10%. So, the highest you can get is a 10% rating if you are service-connected for tinnitus. It’s rare that a veteran receives a higher rating on an extraschedular basis. I’m sure there are instances where it has happened but those instances are sort of few and far between.

We do want to note though that VA has proposed to change this rating in the future. Under VA’s new proposed rule, tinnitus would need to be related to non-compensable hearing loss or another service-connected disability in order to get a rating. That still isn’t final, again, that still is a proposed rule, could end up not going through. But that’s something that we’re actively monitoring. So, definitely advised to stay tuned on the CCK website or CCK blog for more information as it becomes available.

Jenna: Yeah. Speaking of non-compensable hearing loss, that’s a nice transition to the 6th most common disability claim, which is hearing loss. So, hearing loss involves muffling of speech and other sounds, difficulty understanding words, trouble hearing consonants, frequently asking others to speak more slowly, clearly, or loudly, and is often results in withdrawal from conversations and avoidance of some social settings. So, it can significantly impact the quality of a veteran’s life and daily functioning.

According to the CDC, veterans are 30% more likely than non-veterans to have severe hearing impairment. We see a lot of veterans who were exposed to high levels of noise in service, who come out of service with hearing loss.

So essentially what VA is measuring with these, is they’re measuring hearing in a soundproof booth. So, while ratings can range from 0 to 100%, most veterans only receive a 0 or 10% rating because there’s a distinction between what they can hear in a soundproof booth versus what they can hear in their daily life. So, even though a veteran may be service-connected for hearing loss and have a lot of trouble hearing normal conversations or hearing people in a noisy restaurant situation or something like that in the soundproof booth, they only rate a 0 or a 10% rating. So it’s really difficult to get a high rating for hearing loss, but it is one of the most common claims. And veterans are more likely than non-veterans to have that hearing loss.

So, like Brandon said about tinnitus, hearing loss is also extremely difficult to get an extraschedular rating for. But, sometimes if hearing loss develops into non-hearing-related symptoms such as a psychiatric disability, depression, something like that, there’s a possibility that you could get secondary service connection or separate ratings. So, if that’s something that you think is happening to you, I would encourage you to check out our website, we have a lot of information on separate ratings, extra scheduler ratings, and kind of what we think is the unfairness of a hearing loss rating.

That takes us to the end of our presentation today. Those are the Top 6. Thank you all so much for tuning in. Brandon, do you have any closing remarks?

Brandon: I don’t. I think the only thing I would probably close with, is if you’re suffering from any one or multiple of these conditions and you haven’t filed the claim, file now.

Jenna: Yes. Rachel, how about you?

Rachel: I think the only thing I would add is because these are so common, sometimes veterans will hear that others who have filed the same claims will get a grant faster than they have. But, it always comes down to the individual facts of the case. So, whenever there’s a denial, it’s important to review the reasons for the denial carefully or respond to VA’s requests for information.

Jenna: I think that’s a great note to end on. Thanks, Rachel. Thanks, Brandon.

So, as we’ve said, more information on service-connected disabilities, VA ratings, and the claims process in general can be found on our blog, and if you prefer videos we have an extensive library on YouTube as well. So, please be sure to subscribe to our channel and follow us on social media, and we will see you next time.