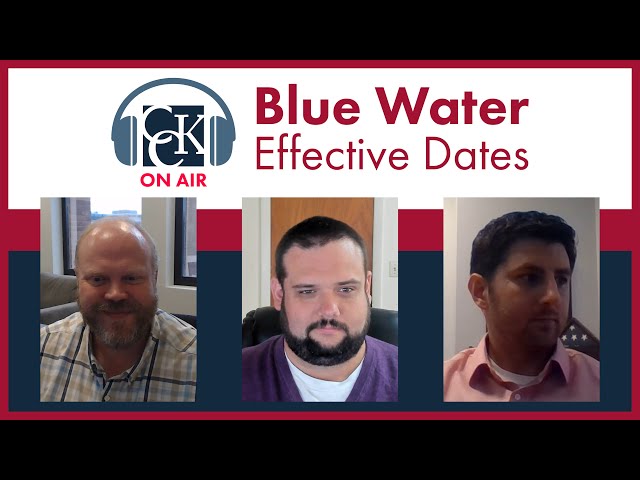 Joining me today are Nick Briggs and Michael Lostritto, both of the firm.  We’re here today on the Veterans Legal Lowdown, discussing the recent update from the Office of Inspector General from the Department of Veterans Affairs regarding Blue Water Navy veterans benefits.

So, thanks for tuning in.  We’re really looking forward to having a discussion about this topic, and let me start with Nick.  Nick, who are these Blue Water Navy veterans?

Nick: Sure, Brad.  And so Vietnam-era Blue Water Navy veterans are classified as those who served aboard ships in the open waters off the coast of Vietnam during the Vietnam war but did not actually go ashore.  There’s an estimated number of about 50,000 to 90,000 Blue Water veterans.  And as the result of a January 2019 Federal Circuit decision Procopio, as well as subsequent legislation passed by Congress, these Blue Water Navy veterans are afforded the same presumptions of Agent Orange exposure as those who served boots on the ground in Vietnam.

We have a bit more information on this topic in separate blogs on our website, but long story short, these veterans were previously denied the presumption of herbicide exposure, now would have it available to them when filing their claims.

Brad: So, these are the Agent Orange and the herbicide agents that were used primarily in Vietnam during that era of the 60s and 70s, is that right?  So, what are these issues with the Blue Water Navy benefits, Mike?

Mike: So, the good news is that due to the Blue Water Navy Act, thousands of Blue Water Navy veterans are now newly eligible for disability benefits when they previously were not related to the presumption for Agent Orange exposure.  So, VA notified veterans of this change and its potential impact on their benefits.  However, a recent investigation by the VA Inspector General, the OIG, found that, in fact, many of these claims are being incorrectly reviewed and processed.  So, the numbers that we have are that an estimated 2,100 of the potential 4,600 Blue Water Navy claims from approximately April through June of the last year 2020, were decided incorrectly.  95% of these errors involved just non-compliance with general rating policies and procedures, and primarily, I think, establishing correct and proper effective dates for any retroactive payments and awards that were granted as a result of these newly eligible Blue Water navy benefits.

The numbers are pretty staggering from the report.  The mistakes made in adjudicating these claims totaled an estimated approximately 37 million dollars in misappropriated benefits, and this involves underpayments and benefits to veterans due to their eligibility based on the new act and new law.  And so many of these veterans who should have been receiving benefits were not, in fact, receiving all of the benefits that they were entitled to due to effective date errors, due to errors in processing.  And so this is a big issue.  Again, the good news is that veterans are now entitled to these benefits, but as this report shows, not all of those benefits are being correctly decided, oftentimes leading to underpayments in veterans eligibility.

Brad: So Nick, let’s talk a little bit about these effective dates and the retroactive payments.  What’s going on with the stuff that Mike is talking about?

Nick: Sure.  So, the big thing that comes into play when VA is trying to figure out how much to pay a veteran in a given case comes down to what the assigned reading is and then the effective date of the claim, how far it can go back.  The reason it becomes complicated in these Blue Water Navy cases, in particular, is that many of these claims involve retroactive benefits.  In some cases, the start date for payouts can be the first day that the veteran filed the claim, which in many cases is prior to the date of the 2019 law.  But in other cases for veterans who are filing these claims for the first time, the effective date can only be pushed back as far as the 2019 law, implementing the Blue Water Navy Veterans Act.  So in the OIG report, VA found stuff that is more likely to award extra retroactive benefits, meaning they assigned an earlier effective date than they should have, and that something along the lines of 680 of the 2,100 claims granted were affected by an inaccurate effective date.

But again, this error goes both ways.  There are some decisions that are assigning earlier effective dates than they should be, and there are certainly decisions that are assigning effective dates that are much more recent than they should be.  Because again, we’re talking about claims that might have been filed five, 10, 15 years ago.  So, there are naturally going to be some hiccups and how these claims are processed and adjudicated, and VA effective dates get complicated fast.  So, it’s something that they need to take more time to look into.

Brad: So, Mike, what’s VA doing to remedy all these errors and issues in assigning correct effective dates and retroactive awards?

Mike: Yeah.  So, OIG made several recommendations to address these issues and try to avoid any underpayments moving forward.  Some of these recommendations included clarifying guidance to explicitly state that employees should use discretion in reviewing and interpreting the results generated by the ship locator tool.  The ship locator tool is kind of an internal tool that VA uses to determine exactly where the ship was located that the veterans served upon.  And so, generally speaking, Blue Water Navy veterans need to have served 12 nautical miles seaward of the demarcation line of Vietnam between ’62 and 1975.  And so, VA uses the ship locator tool to try to determine the exact coordinates of the veteran’s location to determine their eligibility.

So, part of the OIG’s recommendations were to use a little bit more discretion in reviewing and interpreting the results of that locator tool, so it’s not so mechanical.

Another recommendation was to update standard operating procedures for their records research team.  Again, going to try to alleviate some of the same concerns.  Specifying how processors should handle the ship locator tool results that produces a questionable or impossible location to determine.  So, as you can see, there’s a lot of gray area in determining the exact coordinates of potentially where the veteran served and so, OIG essentially recommended that there will be a little bit more discretion used to help determine those locations.

But also, and finally, one of the recommendations that I think is maybe most helpful is standardizing the claims review process across Regional Offices.  There are a number of Regional Offices across the country, each operates slightly differently, sometimes wildly differently.  And so, one of the recommendations that OIG made was that it would really benefit all veterans, but in particular, Blue Water Navy veterans, if their particular claims could have some sort of standardized process across all Regional Offices to try to alleviate the differences in the outcome that may result.

So, while not every claim is processed incorrectly, of course, a large portion of veterans who have already been waiting for years for these benefits, unfortunately, are now experiencing even further delays because VA has not successfully and correctly implemented the claims processing for these new Blue Water claims.

Brad: So, the bottom line is if you think you’ve been impacted by this and if you believe you’re not receiving the correct benefits from VA, you have options and we strongly recommend you contact a VA-accredited representative to review your case for errors on the VA’s part, and to ensure that you’re maximizing your potential benefits because this issue is not unique just to these Blue Water claims.  In our experience, this is a recurring issue that VA struggles with.  Effective dates can be very complicated under the law.  In fairness, it’s hard sometimes for the raters to figure them out correctly, and CCK finds that most cases we require, most cases we handle, require additional appeals and work to ensure a proper effective date for benefits.

So, the experienced agents and attorneys at CCK are available to assist you no matter what your issues, what issues your claim might involve.  So, contact us to learn more.  But most importantly, even if it’s not us, contact somebody who is accredited and who really understands effective dates and the VA claims system.

So, I want to thank everyone for joining us.  Nick, any final words before we go?

Nick: Just that again, these are complicated.  Like you mentioned, even the most traditional TDIU case can end up having incorrect effective date assigned.  So, even if you don’t seek out an accredited agent, there are organizations available like the DAV to assist.  Just don’t let VA get away with some of the mistakes that they’re making on your claim.

Brad: Mike, do you have anything to add?

Mike: I would just add that I agree with that wholeheartedly.  I would just add that, you know, it’s beneficial for veterans to continue appealing their claim and, you know, not settle for necessarily a denial or resort to filing yet a new claim.  It’s important to keep their claims alive to the extent that they can, seek representation where needed because as we’ve said here, these are difficult issues, and often times it does, unfortunately, need several appeals for some of these thorny issues to be worked out.

Brad: Great.  Well, thank you all for joining us.  Again, for Nick Briggs, Mike Lostritto, and I’m Brad Hennings, with Chisholm Chisholm & Kilpatrick.

To stay in the know about VA news and veterans updates, be sure to subscribe to the Veterans Legal Lowdown and you can also visit our blog for more information.  Again, we’re CCK – Chisholm Chisolm & Kilpatrick.  Thank you again.