Are you a veteran, a family member of a veteran, a civilian, or a dependent of a deceased veteran who served at Camp Lejeune between 1953 and 1987 for at least 30 cumulative days? If so, the recently-passed PACT Act may enable you to receive compensation due to contaminated water exposure.

Chisholm Chisholm & Kilpatrick, a national leader in Veterans’ Disability law, is working with the law firm of Levin Papantonio Rafferty, nationally recognized leaders in Mass Tort law, to help those exposed to the toxic water at Camp Lejeune receive the compensation they deserve. Continue reading to determine if you qualify.

If you or a family member were stationed at, or lived on Camp Lejeune, North Carolina between 1953 and 1987 for at least 30 cumulative days and developed one of the following cancers, compensation may be available to you. 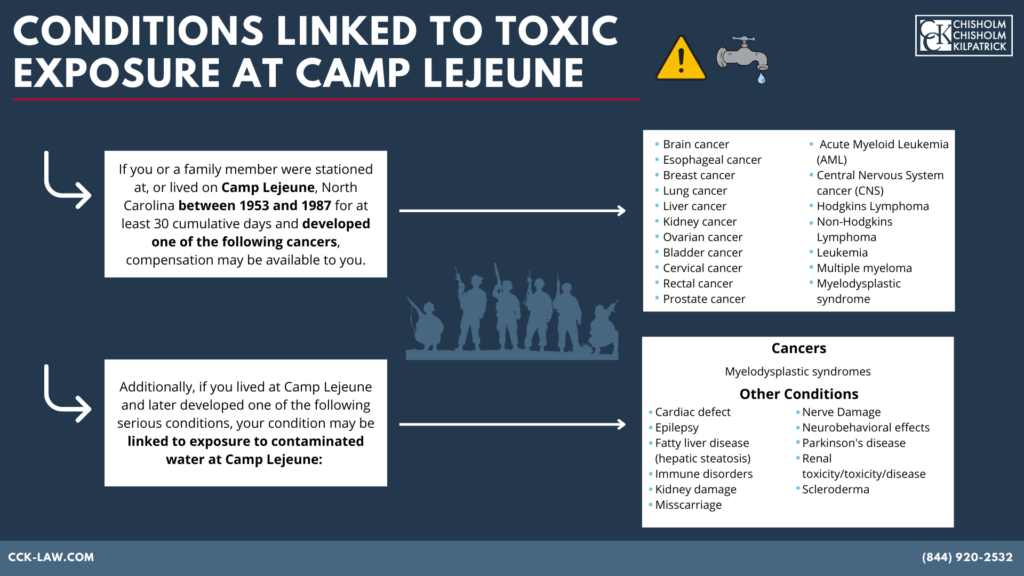 Additionally, if you lived at Camp Lejeune and later developed one of the following serious conditions, your condition may be linked to exposure to contaminated water at Camp Lejeune: If you were stationed, worked, or lived at the U.S. Marine Corps Base Camp Lejeune in North Carolina, it is possible that you were exposed to dangerous and toxic chemicals, which existed in the tap water from 1953 to 1987.

Testing found that drinking water sources at Camp Lejeune were contaminated with benzene, trichloroethylene (TCE), tetrachloroethylene, or perchloroethylene (PCE), and vinyl chloride (VC), all of which are known to be carcinogenic or harmful to humans. A significant portion of this community have suffered severe health consequences, such as cancers caused by exposure to these dangerous toxins. Although officials were aware of the water contamination on Camp Lejeune, they never addressed the problem.  For decades, veterans, their families, and others who resided or worked at Camp Lejeune were exposed to toxic chemicals, many of whom subsequently developed cancer or other life-threatening diseases.

As such, many people who were exposed to this contaminated water went on to develop serious health conditions.

Ready to see if you qualify? Start Your Free Case Evaluation

What is the PACT Act?

The PACT Act is a piece of legislation that has been passed and signed into law that expands presumptions for toxic-exposed veterans, including those who have been exposed to herbicides, burn pits, and more.

This legislation creates a federal cause of action for any individual, including veterans, who resided, worked at, or was otherwise exposed to Camp Lejeune’s water for at least 30 days between August 1, 1953 and December 31, 1987.

Essentially, this means that anyone who meets these criteria may bring in action in the United States District Court for the Eastern District of North Carolina to obtain compensation for harm that was caused by the exposure.  Compensation will also be subject to offsets for federal benefits the individual receives for the claimed condition, such as VA or Medicare benefits for a condition caused by Camp Lejeune exposure.

The Congressional Budget Office estimates that the Honoring Our Pact Act will cost $278.5 billion. The resulting payouts can depend on the number of individual parties seeking damages, and the severity of their injuries.

The statute of limitations for bringing an action before the Court is two years after the passage of the PACT Act, or 180 days after the claim has been denied under 28 USC § 2675, whichever is later.  This means it is important to act fast to pursue potential compensation for damages related to Camp Lejeune exposure.