On March 14, 2019, the United States Court of Appeals for Veterans Claims (CAVC) issued a precedential decision in a case regarding entitlement to a total disability rating based on individual unemployability (TDIU).  Precedential means that this decision will be persuasive for VA when deciding subsequent cases with similar fact patterns.  In its decision, the Court outlined certain standards for VA to uphold when adjudicating the issue of TDIU.  Specifically, it clarified the meaning of the phrase “unable to secure and follow substantially gainful employment”, which is a determining factor in deciding whether a veteran is entitled to TDIU.  Therefore, the Court’s decision in Ray v. Wilkie will have a significant effect going forward for veterans seeking TDIU benefits.

CCK discussed the wide-ranging impact of the Court’s precedential decision and how it will affect Veterans Law moving forward.  CCK noted the importance of the Court’s decision in finally establishing standards for VA so that not only will adjudication be more consistent, but also veterans applying for TDIU will know what to expect.  This precedential decision finally gives more of a road map so veterans can be treated fairly throughout the VA system and no longer hides standards from veterans, adjudicators, and representatives.  This increased structure and transparency will better help veterans obtain the disability benefits to which they are rightfully entitled. 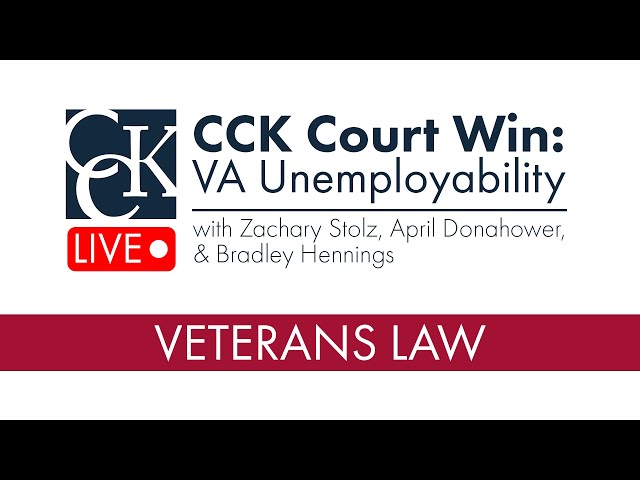 Mr. Ray served honorably in the United States Army from November 1966 to November 1969 and is service-connected for several conditions with a combined disability rating of 50 percent.  In September 2005, he filed a claim for a total disability rating based on individual unemployability (TDIU), stating that he could not work due to his service-connected conditions.  However, the Regional Office (RO) denied his claim and he continued to appeal to the Board of Veterans’ Appeals.  In July 2014, the Board remanded the issue of entitlement to TDIU for referral under 38 CFR § 4.16(b) to the Director of Compensation Services for extraschedular consideration.  The Director denied TDIU in March 2015 and the RO implemented the Director’s decision that same month.  Mr. Ray again appealed to the Board, which also denied him an extraschedular TDIU rating.

The Board found that his service-connected conditions did not render him “unable to secure and follow substantially gainful employment” consistent with his education and special training.  Importantly, Mr. Ray had a high school education and completed one semester of college.  He worked in jobs involving construction until September 2004 when his disabilities prevented him from continuing.  At that time, Mr. Ray did obtain some training in typing and office skills, but his record is unclear as to whether he was successful in gaining those skills.  Following the Board’s denial, CCK stepped in to appeal to Court on the Veteran’s behalf.

CCK successfully appealed to the CAVC the Board decision that denied entitlement to TDIU on an extraschedular basis.  On September 5, 2018, CCK delivered an oral argument regarding this matter at the CAVC in Washington, D.C.  Specifically, CCK argued that the Board’s 2014 decision to refer the issue of TDIU represented a binding factual finding that the Board impermissibly changed when it later denied Mr. Ray an extraschedular TDIU rating in February 2017.  In other words, the Board originally found that Mr. Ray was eligible for TDIU under 38 CFR § 4.16(b).  Therefore, it should not be allowed to go back on this finding and subsequently deny entitlement to TDIU on an extraschedular basis.

On appeal, the Court was required to answer two important questions: (1) What is the effect, if any, of the Board’s determination to refer a case for extraschedular consideration under 38 CFR § 4.16(b) when the Board later reviews the Director’s decision not to award an extraschedular TDIU rating; and (2) Does VA’s refusal to define key terms in § 4.16(b) make the Board’s statement of reasons or bases inadequate, and if so, should the Court interpret those terms itself?  Here, the Court’s answers to these questions not only affect Mr. Ray’s case specifically, but also Veterans Law as a whole, as the ambiguous language of 38 CFR § 4.16(b) has long impacted veterans’ pursuit of TDIU benefits.  While VA instructs that all veterans who cannot secure and follow substantially gainful employment are entitled to a total rating (i.e. 100 percent), it does not define what that means.  In using such broad, ambiguous terms, VA has been able to highly individualize TDIU assessment and thereby inconsistently adjudicate veterans’ claims for benefits under 38 CFR § 4.16.

In response to the first question at hand, the Court found that the Board’s initial decision to refer TDIU under § 4.16(b) “addresses whether there’s sufficient evidence to substantiate a reasonable possibility that a veteran is unemployable by reasons of his or her service-connected disabilities.”  If the Director of Compensation then denies an extraschedular TDIU rating, on review of that decision, the Board must ensure that it adequately explains its reasoning when a factual finding at the referral stage comes out differently at the review stage.  Therefore, the referral decision is not categorically binding, but depending on how specific the referral decision was and whether the record has changed since then, it is “possible that no amount of explanation may overcome the Board’s initial finding.”

Regarding the second question, the Court noted that ideally, VA would have interpreted the phrase “unable to secure and follow substantially gainful employment.”  However, since VA has refused to provide an adequate definition over the years, the Court decided to interpret the phrase itself.  Importantly, this is the first occasion in which the Court has interpreted this phrase and provided guidance on what it means to “secure and follow” said employment.  Here, the Court found that the phrase “unable to secure and follow a substantially gainful employment” in § 4.16(b) has both an “economic” and “noneconomic” component.  Economic refers to the veteran’s ability to earn more than a marginal income as determined by the federal poverty threshold for a single person.  The noneconomic component involves what to assess in determining if a veteran can actually work.  The Court concluded that attention must be given to the following:

In regards to the above-mentioned factors, the Court emphasized that they do not constitute a checklist.  Instead, a factor only needs to be considered if raised by the evidence of record.

In line with these findings, the Court remanded Mr. Ray’s case because the Board failed to explain why the factual finding it made in the referral stage came out differently at the review stage.  On remand, the Board must ensure that it explains its different factual determinations at each stage and readjudicate Mr. Ray’s claim for TDIU benefits.