Malaria Pill Mefloquine May Cause Disability Among Veterans History of Mefloquine Use in the Military

Mefloquine is a once-a-week oral medication used to treat malaria, a mosquito-borne disease caused by parasites.  It was originally developed by the United States Army at the Walter Reed Army Institute in the 1970s and commercially introduced in 1989.  Early prelicensure studies on mefloquine were conducted predominantly among male prisoners, military personnel, and subjects in third-world countries.

Vertigo and nausea were commonly reported in these early trials, but the drug was considered to be largely free of severe psychiatric and neurological effects.  When reports of severe psychiatric side effects, including amnesia, confusion, and psychosis, first emerged, these symptoms were frequently dismissed as coincidental or attributed to pre-existing or latent mental illness.  In 2001, studies were conducted and the results demonstrated that the incidence of specific psychiatric symptoms including nightmares, anxiety, and psychosis were at least 100 times more common than previously reported.  More recent reports of suicide and suicidal ideation, and studies linking the drug to acts of violence, have raised additional safety concerns.

Nevertheless, mefloquine remained in widespread use by the United States military until around 2009 when Pentagon officials, responding to concerns over the above-mentioned psychiatric and neurological effects, issued a policy listing it as a last-choice preventive in areas where malaria strains are resistant to other available medications.  In 2013, the Food and Drug Administration (FDA) placed its strongest warning (i.e. black box warning) on mefloquine, indicating the drug can cause ongoing or permanent neurological and psychiatric conditions, including the following:

Importantly, FDA noted that these conditions may persist even after discontinuing the use of mefloquine. 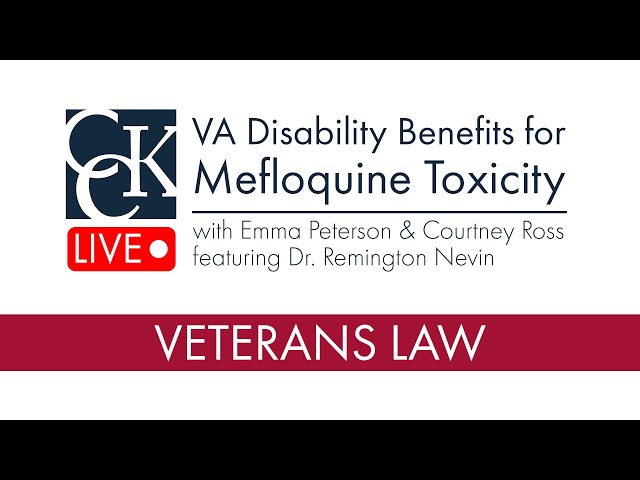 Research on Mefloquine and Disability in Veterans

At the peak of mefloquine’s use by the United States military in 2003, it is estimated that military doctors wrote more than 53,000 prescriptions for the drug.  From 1989 to September 2018, the FDA received 3,742 reports of adverse effects associated with mefloquine, 3,452 of which were labeled as serious.

According to FDA’s Adverse Event Reporting System, some of the events following mefloquine use to prevent malaria included seizures, mania, depression, suicidal thoughts, hallucinations, suicide, and six cases of homicide.  An additional study showed that mefloquine caused at least one negative side effect in 67 percent of the study’s participants.  Therefore, there is growing concern amongst veterans and service members who were consistently exposed to this drug while deployed.  However, veterans often run into challenges with poor documentation that does not reflect the prescribing of mefloquine.  As such, evidence of exposure often rests on veterans reporting a reliable history of taking the drug and of being assigned to a military unit to which the drug was issued by policy or procedure.

On January 28, 2019, a National Academy of Sciences, Engineering, and Medicine committee launched an 18-month study to review the long-term health effects of mefloquine and its use amongst military personnel, Peace Corps volunteers, and State Department employees over the past several decades.  The committee plans to examine the possible long-term health consequences of taking these medications, with a special focus on mefloquine and its potential neurological effects, long-term psychiatric effects, and the potential development of PTSD, as this condition is highly prevalent within the veteran population.