Chisholm Chisholm & Kilpatrick is delighted to announce Ms. Chandler Cole as winner of our 2022 Law School Scholarship for Veterans.  Ms. Cole continues to demonstrate her dedication to and passion for public service as she transitions from a Captain in the Army to a student at Duke University School of Law.

When she started at the United States Military Academy at West Point, Chandler Cole never anticipated the path her military career would take, nor the role she would play on the global stage.  Shortly before the United States began its evacuation following the official end of the war, Ms. Cole began working with some of her peers and other alumni to safely exfiltrate four fellow classmates from Afghanistan.  In fact, within the space of a few days, “all four graduates were inside the airport, awaiting departure with their families.” 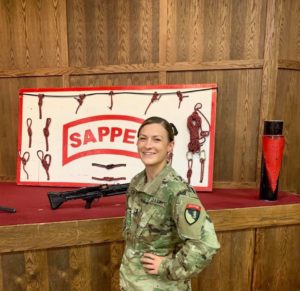 From this point on the group was overwhelmed with messages from other American citizens, Afghan allies, and at-risk individuals seeking evacuation assistance, as well as messages from Congressional staffers, news outlets, and government officials.  The group expanded their operation, recruiting alumni and other volunteers, developing a website and data intake form, and more.  Cole found herself at the head of operations for this rapidly growing endeavor, working with a counterpart to “facilitate the movement of hundreds of people,” vet information, correspond with DoD and State personnel, and even “preparing talking points for major news networks and drafting recommendations for government officials.” In her scholarship essay, Ms. Cole explains that while her younger self would have shied away from the spotlight and hesitated to serve as the face of such an important operation, the challenges she faced as a woman in a male-dominated environment ultimately prepared her for this leadership position.  “My experience built resilience in the face of adversity and made empathy a mainstay in my leadership style,” she reflects.

Despite these personal victories, and that fact that she and her team facilitated the successful evacuation of hundreds of people from Afghanistan, Cole was left with a feeling that her work was not yet complete.  The decision to pursue a career in law felt like a natural next step in her public service journey.  Cole’s time in the Army informed her “personal goals and aspirations, forming a desire to create change for the disadvantaged” and forge a way ahead for those who “put their faith in the legal system.”  While she has already helped so many, Ms. Cole intends to continue serving soldiers and veterans as an attorney in any way she can.

Chisholm Chisholm & Kilpatrick is honored to support Ms. Cole and wishes her the best of luck in her future endeavors.

More information about our Law School Scholarship for Veterans is available on our scholarship page.  Applications are due July 1, 2023 for our 2023 scholarship.

If you have a question about the scholarship or are interested in learning more about our firm’s services, contact us at 800-544-9144.