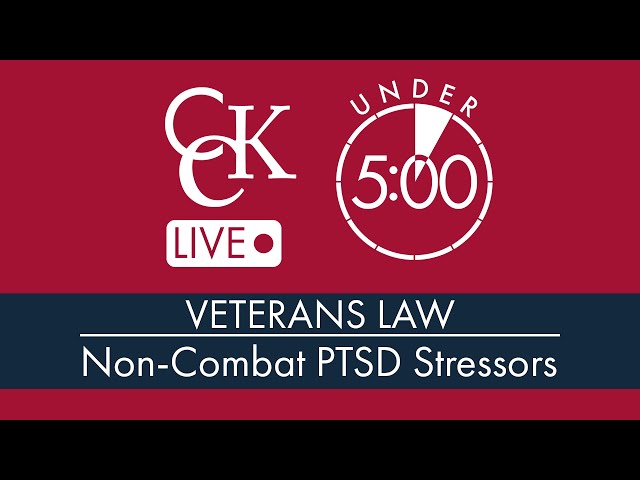 Nicholas Briggs: Welcome to CCK Live Under 5. My name is Nicholas Briggs and today we’ll be talking about proving non-combat PTSD stressors. Short for post-traumatic stress disorder, PTSD is a mental health condition caused by experiencing a shocking, traumatic, or distressing event. PTSD is extremely common among veterans and some common symptoms of PTSD include intrusive distressing recollections of events, flashbacks and nightmares, emotional numbness, and avoidance of places, people, or activities that remind the veteran of their trauma. Increased arousal such as difficulty sleeping, concentrating, feeling jumpy, and being easily irritated or angered.

Veterans may receive VA Disability Benefits for PTSD if they experienced an in-service traumatic event and their condition has been linked to that in-service event. The traumatic event or incident that caused the veteran’s PTSD is known as a stressor. Veterans often times have multiple stressors. Some stressors are combat-related, while others aren’t. And both can qualify for PTSD for the purposes of service connection.

If a veteran was in combat during his or her military service and their stressor is related to that combat, VA is gonna presume that the PTSD is a result of the combat service. In those situations, so long as the combat service is proven, their lay statements about the stressful incident alone are usually gonna be enough for VA to concede the stressor.

When it comes to non-combat stressors such as a serious car accident, a training accident, or some other incident that caused the veteran trauma, you’re going to need some additional evidence to help corroborate that incident. In order to corroborate a stressor, VA will often look for credible supporting evidence from other sources in addition to the veteran’s statements themselves.

VA does have its own form, Form 21-0781. That’s called the STATEMENT IN SUPPORT CLAIM FOR SERVICE CONNECTION FOR PTSD. By their very nature, non-combat stressors can be more difficult to prove since VA doesn’t presume service connection unless there’s something about the veteran’s service records or other evidence they provide that provides additional corroborative evidence in support of the claimed stressor.

First, the VA is gonna require the veteran to fill out VA Form 21-0781. They ask you several questions to outline the in-service nature of your PTSD stressor, whatever it may be. Once you provide that information, VA is required under their duty to assist, to help you corroborate that non-combat PTSD stressor. The duty to assist in this situation is kind of a two-way street, so the veteran needs to provide any additional information that the VA might ask for so that, they can go through the motions of trying to verify the stressor on their end. In addition to providing information, the veteran can obviously provide any relevant evidence they have on their end to help corroborate their stressor from VA’s perspective.

At a minimum, when filing your claim for PTSD, you should provide your full name, your social security number, and identify that you’re filing a claim for service connection for PTSD. And as always, when filing a claim you should use VA’s Form 21-526. In addition to the claim form itself, you’ll want to provide the VA Form 21-0781 as soon as you can. In filling out that form, what you’re gonna be asked to do is to provide a description of the claimed stressor, the month and year when the stressor occurred, your unit of assignment at the time of the stressor, and the geographical location where the stressor occurred.

To verify your stressor, you might wanna submit additional documentation in the form of newspaper articles. For example, if there was a severe car accident in the place where it might have been noted by the local news, it might be available in those records. You could also submit navy deck logs, obituaries for anyone who may have died during the incident in question, any pictures that you might have from the time of or around the time of the stressful incident, as well as lay statements from fellow veterans or other people who have direct knowledge and may have witnessed the traumatic incident that caused your PTSD.

You can watch our full-length videos about PTSD stressors and how to corroborate them on our website. Please be sure to continue to follow us on social media. Thank you.