Chisholm Chisholm & Kilpatrick (CCK) is thrilled to announce Mr. Zachary McComas as the winner of the 2022 Child of an American Veteran Scholarship.  Mr. McComas’s experiences as the child of a disabled veteran shaped his view of the world and influenced his educational aspirations.

About the Scholarship Winner

Throughout his life, Zachary McComas has always focused on maintaining the strong moral code instilled in him by his mother.  As a single parent of twins, McComas’s mother worked hard to give her children the best possible life.  McComas explained that his mother, who also grew up in a single parent household, joined the Air Force at 17 as one of few women in the military. 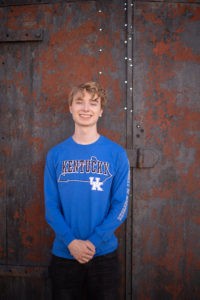 Even when injuries she received during her service began to affect her life, McComas admired that his mother “never regretted” her time in the military.  Instead, she took the lessons she learned from her experiences—namely an emphasis on doing the right thing, being there for others, and following through on obligations—and passed them on to her children.

McComas recalls how he was given opportunities to put these valuable lessons into practice.  His mother took him on trips, both across the country and abroad, encouraging him to “experience different cultures” and appreciate the vastly different perspectives these cultures produced.  She also allowed him the freedom to pursue his own interests in school, so long as he tried his best and remained dedicated to his studies.  As a result, Mr. McComas plans to major in International Relations with a minor in History at a college with a study abroad program.

McComas thoughtfully summed up his mother’s influence as follows: “My drive and my attitude are a direct result of growing up in a military family with a parent who never quit, opened my eyes to all the world has to offer, and gave me the moral code to live my life in a productive successful way.”

About the Child of an American Veteran Scholarship

As part of our mission to serve veterans and their families, Chisholm Chisholm & Kilpatrick LTD offers the Child of an American Veteran Scholarship to one deserving student each year.  Any child of a United States military veteran with a cumulative 3.0 grade point average who is currently enrolled or will be enrolled in an accredited U.S. university or college is welcome to apply.  A transcript, 500-word essay, and proof of parent’s veteran status are required as part of the application.

The deadline to apply for the 2023 scholarship is December 15, 2022.  Please do not hesitate to reach out if you have any questions about the scholarship or the application process.