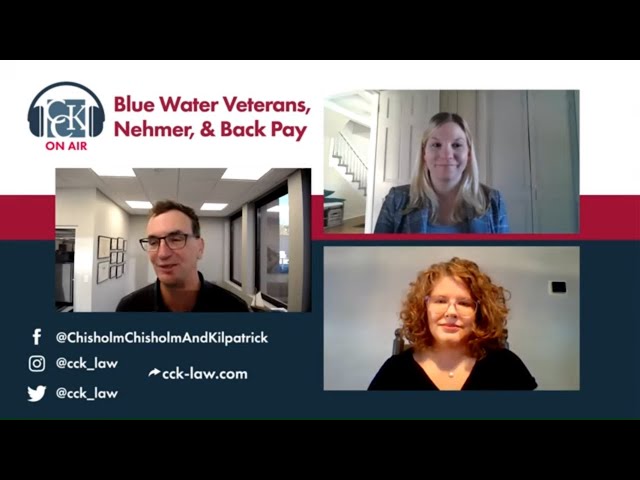 Robert Chisholm: Good afternoon and welcome to CCK. Joining me are Courtney Ross and Amy Odom, and we have a hot take on a decision out of the Northern District of California that impacts Blue Water Navy veterans in a very positive way. I am going to turn to you, Courtney, to talk about who these class of veterans are, that are so-called Blue Water Navy veterans.

Robert: And these veterans, these Blue Water Navy veterans like the veterans who served on the landmass of Vietnam are entitled to a presumption of herbicide exposure, and if they have certain diseases, the VA will grant service connection for those. But there is another matter that has also been going on for close to a few decades now, Amy, and that is the Nehmer case and the Nehmer class of veterans. This case, out of the Northern District of California, is part of that Nehmer case. Can you explain to us how Nehmer applies to this class of veterans, these Blue Water Navy veterans?

Amy Odom: Sure. Thanks, Robert. So the Nehmer case ended with a settlement agreement in which VA agreed that every time it adds a new disease to the list of diseases that it will concede or agrees that have been caused by herbicide exposure, it will go back and re-adjudicate any claim that it previously denied for a veteran who served in Vietnam because there was no link between the claimed disease and herbicide exposure. So, for example, coronary artery disease is one of the diseases that were most recently added to the list of diseases that VA acknowledges are caused by herbicide exposure. So if a Vietnam veteran filed a claim for a coronary artery disease prior to the date that VA finally acknowledged that that disease is linked to herbicide exposure, it will go in, and that claim was denied, VA will go back automatically, without the veteran having to file anything, any new claim or anything, and re-adjudicate that claim. If it awards benefits, the effective date goes back to the date of the original claim. However, for many years, VA did not consider Blue Water Navy veterans to be Vietnam veterans for purposes of these presumptions of service connection. So it did not go back and automatically re-adjudicate Blue Water Navy veterans’ claims every time it established a new disease. But under the Court’s order from the Northern District of California, VA now has to go back and automatically re-adjudicate all Blue Water Navy veterans’ claims that it denied because, one, the veteran was not considered a Vietnam veteran for the presumption purposes, and two, the disease claimed had not yet been added to the list of presumptive claims.

Robert: So this is a big deal it seems to me. I think it is important to draw a distinction between two things. First, a veteran who served in the territorial waters offshore, as Courtney just said, could have filed a claim now under this new Act, but what you are saying is if someone had filed in the past and been denied, this order says you, VA, have to go back and figure out who filed the claim in the past and make a new decision giving this class of veterans the benefit of the presumption.

Amy: Yes, I would say both.

Robert: Okay. Courtney, this is obviously a good thing for veterans. Do we have any advice for anyone that is in this group of– this class of veterans who served in the twelve nautical miles off the shoreline of Vietnam or the leeward islands off the shore of Vietnam.

Courtney: Yes. I would say a couple of things. One, this is great news, but I would not let it hold you back from filing a new claim now if you think you are eligible for benefits under the Blue Water Navy Act. I would still go ahead and file the claim for the condition that you think is presumptively service-connected due to your exposure to herbicide. Two, I think if you are aware that you previously filed a claim for, let us say coronary artery disease, and it was denied before the Blue Water Navy Act extended this presumption to this class of veterans, we are still unsure how VA is going to go back and find these cases, and so, as a veteran or a veteran’s family member, if you know that you fall into this class of people, it might be best to let your representative know or to reach out to VA and kind of get ahead of that.

Robert: Okay. Amy any final thoughts from you?

Amy: No. I just am really glad to see this long-deserved change in the law and I am glad that Blue Water Navy veterans are finally getting their justice.

Robert: I agree with that. Amy, Courtney, thank you for joining us and continue to follow us on cck-law on Facebook and other social media.