Shawn joined Chisholm Chisholm & Kilpatrick in August of 2019 as an Associate Attorney. His practice focuses on representing veterans with disabilities before the Court of Appeals for Veterans Claims and the Department of Veterans Affairs.

Upon graduation from Miami Law, Shawn received the HOPE (Helping Others through Pro Bono Efforts) community service and pro bono service awards for his efforts in the greater Miami-Dade community. He also served as an Articles and Comments Editor on the University of Miami Law Review where he published an article on union activity for the law review’s website.

Prior to joining Chisholm Chisholm & Kilpatrick, Shawn worked at the National Labor Relations Board in Miami, FL as a legal intern during his first summer in law school. His second summer in law school was spent at Hancock Estabrook LLP in Syracuse, NY as a summer associate gaining experience in complex litigation. During the school year, Shawn worked at a small plaintiff-focused civil litigation firm in Miami, FL advocating for unlawfully terminated employees, victims of sexual harassment, and wrongly evicted tenants, among others.

During his free time, Shawn enjoys traveling the world with his spouse, running marathons, going to sporting events, and trying out new restaurants. 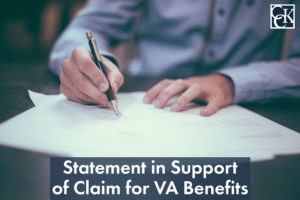 Statement in Support of Claim for VA Benefits